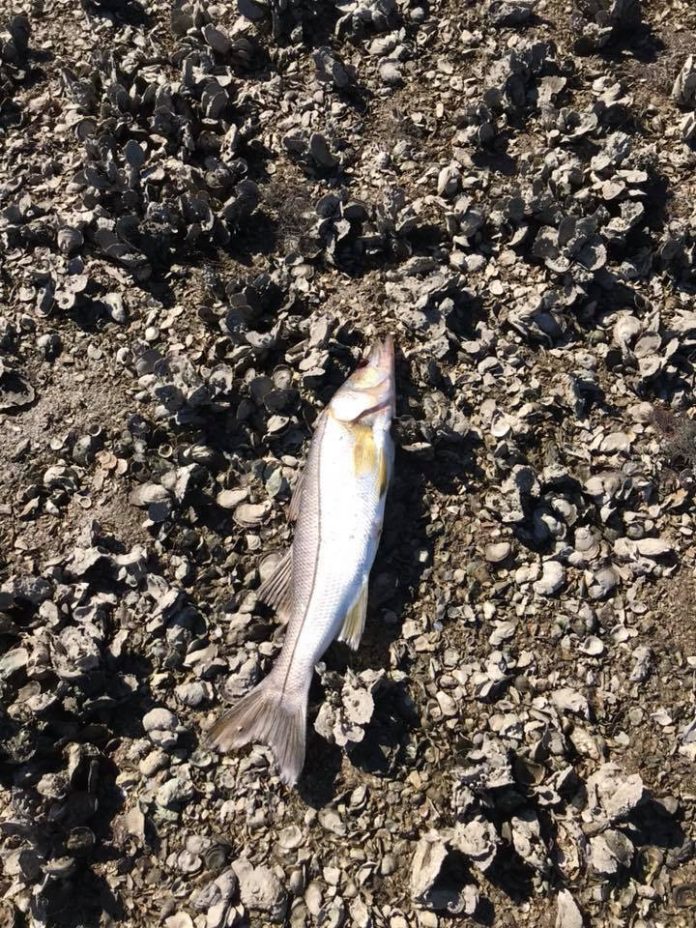 Frustration abounds.    A week since this all started, the reports of fish kills was significant.    My own position:  I got daily calls from Captain Scott Moore.   He tried to remain upbeat to start but ultimately, he saw a lot of lost fish.    A lot of question marks will be in this one.

Zero response from the state of Florida.   Three letters.    Not a single acknowledgment.    After the mistakes of the past there are a few things that just don’t bode well.   Not talking to us is one.   A second, no one anywhere ran into a biologist.    This I don’t understand.   I mean, if that’s your job?   Where are you.

Different arguments.   I still get people that say snook numbers were great.    I shrug that off.    I did another 250 days on the water in 2017.     If snook were so abundant wouldn’t we be catching them?    On accident, if snook were so plentiful, wouldn’t they be a daily catch?     We only caught an accidental snook every couple of weeks.    That is a very good random sampling I provide.     The condition of snook in 2009 before the big freeze:    12 snook per trip, average size was 32 inches.   How do you compare what we have now to that?    You can’t.     I am but one “expert.”    I have the support of the general guy who knows what’s going on.

Pretty basically, why wouldn’t we want the largest population of big snook as fast as possible?     There are literally dozens of other species readily available “to eat.”    Why do we have to hurt our future by harvesting our premiere gamefish?  Speckled trout are a great example.     We can’t hurt that fishery.   There are more trout than I have ever seen in my life.     Not as cold sensitive, they have not been hit by a red tide in years and those should be taken at will.     Eating a snook:   I just don’t see it.    A snook is more valuable alive than dead.    Example for the economy:    I have 12 clients I haven’t taken fishing since 2009.   Why?    They want to catch snook.   I haven’t offered the trip.    These are just my clients.   I am but one guide.   That’s 12 people not buying plane tickets.   That’s 12 people not getting hotel rooms.   That’s 12 people not spending money in our restaurants.      That is significant.

You are in the position I have been in.   People treat you like you are a fanatic.   Like you are extreme.     The people who know me realize exactly what I am doing.   It is about doing things right.   Snook have not been handled right.   Do we repeat the mistakes of the past?

Captain Scott Moore is the most knowledgeable guy I have ever met.     He calls me.   Why?    Because I get it.     I want things done right.   I pushed hard for it.    Ultimately, I won, becoming the first guy in history to get the state to admit they were wrong.     Here, it starts again.    My initial attempts, ignored.   My other avenues not yet opened, I figure that I will have discussion going on this fast.      You have your input.    I’m not saying mine is more important than anyone else’s.    But mine is significant.     There are probably very few people in the world that know snook better than I do.     That isn’t bragging that is a simple fact.

I created the greatest advisory panel ever assembled for the state to use.    Did they use it?    They acknowledged it.   They promised to use it.   Two years go by and, no, they did absolutely nothing.    The people on my panel, some stunned some not surprised but all were disappointed.   I assembled them to make a difference.    I layed it on a plate.     I made it just that easy.    Nothing happened.     So you can’t blame me.     I did my best to make things better.

Here we are, up against it again.    You can’t argue with me.    We lost fish.     The things up for debate:   how bad are things now?   My opinion, this may set us back worse than we were in 2010.      My colleagues agree.    Snook were not fully recovered.   Managed differently we would have had more fish to survive this event.       Not the way it happened, just where are we now?   A biologist can’t tell us.    You have to study a problem to know what you are facing.       Total failure.    Absolute total failure.

Where do we go now?     They closed them before.    They should automatically close them again.      For how long?    Well, what do you want?    The existing fish will spawn.    How many of the spawned fish will we protect to adult status?   That depends on how long you keep them closed.     I have had lashback.   I say seven years.      What’s seven years of catch and release to restore a species?   It’s nothing.     Make the common guy let them go.    The more serious fishermen already let them go.

The saddest part is the people who didn’t join in.    People who practically supported the bad decision makers by their silence.      Newspaper people.   Television show hosts.      People that just took the easy route and didn’t get involved.    The Scott Moore’s and the Neil Taylor’s of the world say no to that.     We fight for what’s right.     This time we will fight it BEFORE they make the wrong decisions.     The last time, quite honestly, we were shocked that they did what they did but the reality is:  Once the government does something, it is basically impossible to get it undone.

A guy who fishes once a week telling me snook stocks are great.    OK.    Scott Moore tells me he has some snook but nothing like 2009.   I reply “Jealous.     I have next to none everywhere I do.”    I take Scott’s as fact.   He takes mine as fact.    The reason, both of us speak cold hard facts.     So many locations I go, the snook never came back at all.    “The whole picture” snook were getting better but reopening to harvest exposed the fish to removal.     Protecting two more classes of fish to adult spawners would have been the best way to go.      Try as you will, you can’t argue that, not if you wanted the fishery to approach where it was in 2009.

My nephew is 19 years old.   Ultimately, he hasn’t seen good snook fishing in his adult life.    He saw it when he was pretty much too young to remember it.      Doesn’t it mean something that we had an episode and we have not taken steps to get things back to the way they were?     You cannot argue it with me.   Snook fishing is nowhere near what it was in 2009.   Given the events of cold weather this past week we took another giant step backward.       What do we do now?     What we do now is talk it over and do it right.     If Scott Moore isn’t involved in this decision making, the state has lost again.     Use the knowledge.      Do all that you can to make good decisions.    Is that too much to ask?

They exist to manage our resources.    They work for us.       You all want to vote me down, fine.   If we don’t do this one right this time I assure you, you will never hear from me again.   People aren’t going to  be happy to read that one.   But it’s true.     I will do my best, again.   But if no one wants a good snook fishery then I can just go about my own business.    I can still do business with no snook.     I can tell you that it is a shame what happened.

Now we wonder:   What happens now?