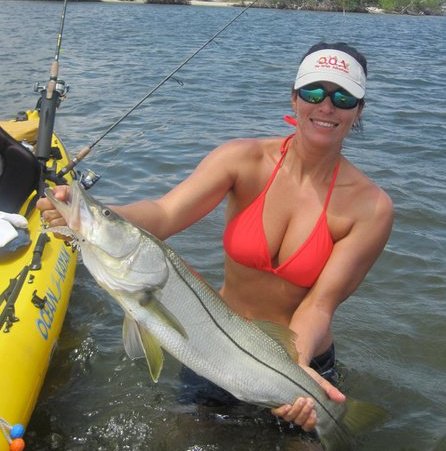 There is “catching snook” and catching “really big snook.”   A common angler goal is to join the “40 Club”, winning the battle with a snook above the 40-inch length.   Many are able to catch snook, with fish of a respectable size but they never seem to hook, and ultimately catch that “big girl.”   Angling from the kayak can definitely help create some shortcuts for achieving the goal, with other applications that are useful to anyone trying to reach the same goal.   Get in to the game “prepared” with the appropriate tackle, lure and bait selection.

The aged snook is usually female with roughly 1% of the really large snook remaining male, according to FWC snook expert Ron Taylor.   “With age, comes wisdom”, I have been told.   A more accurate description to me is “there is no substitute for experience.”   A large snook has been around to experience a lot of things, including fishermens’ hooks.   Whether it is instincts or “street smarts” with their elderly status, the really large snook is a formidable foe.   Regardless of your fishing venue, a quiet and low profile approach is critical.   In the kayak, this is simple to achieve.    It facilitates accessing areas “off the beaten path” where many of the largest snook are avoiding the growing numbers of water users and more likely to be tricked into feeding on a lure.

Appropriate tackle is prerequisite.  Without medium-heavy to heavy action equipment, with a 30 to 40-pound fluorocarbon leader, don’t expect to make the best of an opportunity when a really large snook falls for the offering.   A reel with high line capacity is a huge benefit because large snook can make long runs.   In “structure” situations, such as docks and bridges, be prepared to put a lot of pressure on a snook to keep her from reaching the obstruction.

Lure and bait size is very significant.  If you want to catch a lot of snook, stick with the smaller baits.   If you want to be in The Club, serve the fat girls a “real meal.”   In targeting large snook, seasoned anglers will tell you that they see the largest snook feeding on mullet or other baitfish that are in the 6 to 12 inch range.   A larger snook is most likely to go for the substantial meal rather than the smaller menu items regardless if it is a lure or a live bait.

Fighting technique is the final piece of the puzzle.   Compare a snook to a redfish: Once hooked, rarely a redfish will escape.   But there are 142 ways a snook, once hooked, can escape capture.     If in a situation where the fish has “room to run”, let the fish make that charge without pulling back on the rod, reducing the chances of the line breaking.   Smoothen out your fighting technique as much as possible, smoothly moving the fish toward you and then –without slack- reeling up the line.