High seas and strong winds have been keeping us in port or not venturing too far offshore. Easterly winds have cleaned up the water and to our surprise there are enough Spanish mackerel and bonita around to bend the rods and provide some table fare. Both of these species can be found along the shoreline and as far out as the near shore artificial reefs such as Treasure Island, St Petersburg Beach and Madeira Beach. Which are within 7 miles from shore. East winds can fool many boaters because leaving an inlet and being in the lee of the shore there will be calm seas. Usually with east winds the further you venture offshore the higher the seas will be. It is easy while running with a following sea to be lulled into a sense of security until one stops the boat and turns into the waves before realizing how large they really are. With westerly winds rough seas will be obvious as soon as one enters the gulf because the waves will build up as the water become shallower. Until the winds subside the best bet is to target inshore species especially sheephead which are now gathering in spawning aggregations near any entrance to the gulf. 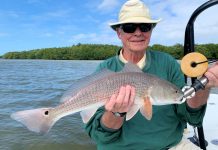