Hot summer conditions can make for slow afternoon fishing. To capitalize on the prime fishing hours for juvenile tarpon we usually leave the dock at 4 pm and fish till dark.

These miniature silverkings almost always go the bottom of the deepest holes or channels that they can find at mid-day and simply sit there. They will periodically come up and roll to gulp air but seldom bite when they are in this pattern. Time of day is the secret to catching them. We recently had a group that wanted to fish for small tarpon fish all day. It was hot and calm and for most of the afternoon and we struggled to get bites from fish we knew were there. They were not only visible rolling but we could see the entire school on side-scan sonar as we idled by. We moved several times to different spots with the same results; an occasional bite here and there but not much. As the sun finally got lower and the temperature began to drop.  we went back to some of the same spots we had been earlier. The fish came charging up. An hour before sunset they went crazy and we caught them on fly rods and had double headers on spinning gear. We finished what started out as a dreadfully slow day by hooking 33 tarpon and landing 19 simply by being in position when the time got right for the fish to feed. The hours we spent being hot and not catching fish were instantly forgotten. 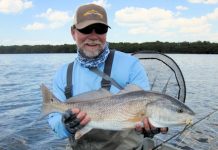