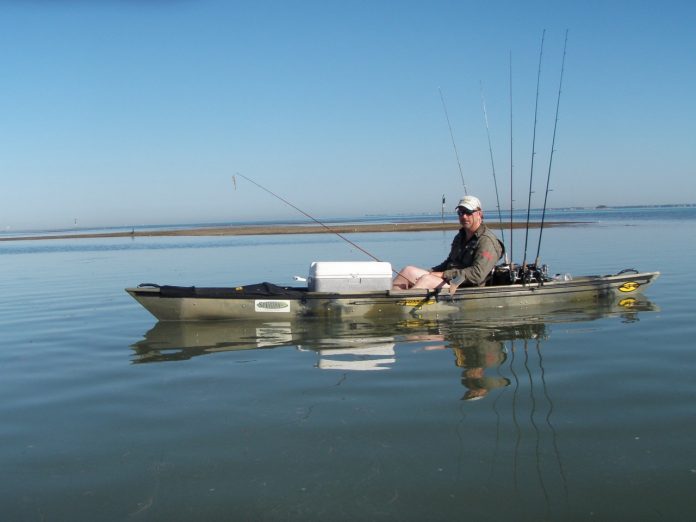 For most kayak anglers, December marks the time for “bundling up” a little more.   Break out the waders and other dry gear and as I like to say “stay dry, stay warm.”   Get good wind and tide forecasts, “dress for it” and get in on the action!

A glimpse at the month of November for kayak anglers around the Sunshine State:  excitement and nervousness rolled into one.  The October action has been so good for everyone pretty much statewide, the anticipation for continued action is high but “just what will the weather bring?”   December is a weather “lottery”, similar to March or April depending on where you are in Florida.  Will the baitfish stay inshore or will it migrate off?   These are all issues for the kayak anglers in many areas of the state.    Hopefully the weather gods cooperate and everyone, statewide, get to use their plastic boats a great deal this month!

The Tampa Bay region– The Tampa Bay region will have a variety of options for the kayak anglers.   Redfish remain a great option.   Trout should become “very good” this month.   Silver trout, whiting, pompano, flounder, drum, black sea bass and sheepshead will all be available.   Redfish will be on the open flats behind all the barrier islands and also moving into the upper stretches of Tampa Bay.   With more severe weather, they will be in the canals and creeks more than in the shallows.  Bluefish may also be a predator in the area.  There are already plenty of them here right now. More on BLUEFISH, click on the link.

Will the king mackerel still be around the area?   If the month is mild and their food sources stay, they should be an option.  “Kayak kingfish” outings should be done with sound planning,  avoiding dangerous situations such as high winds combined with strong currents.   Have an action plan should you get into any kind of trouble fishing this kind of deep water situation.   Harvesting a kingfish by kayak is going to require a large fishbag, which are a great tool and can be conveniently stored in the kayak.

Many of the “tailing” fish that will be seen in the shallows will actually be black drum and sheepshead.   As the cold fronts continue to stack up and send the water temperatures down to where they will be most of the winter, watch for whiting and silver trout to invade local waters.

Go shallow and get out on the big negative low tides and follow the redfish right up the flat as the water rises.   With plenty of crabs and other crustaceans in the shallow mud, “tails” will tip off the location of feeding redfish.   Mixed in with the “redfish tails” will be sheepshead digging out the same meals the redfish are after.

Clearer waters make long casts a “clear advantage”.   Weedless lures like the 12 Fathom SlamR on The Edje jighead will work better in these situations.   If the lures are not getting strikes, add some Pro Cure gel inside the groove of the plastic tail and let the redfish “sniff it out”.

If the weather is really nice this month, fishing will be as easy as it gets.    The fun is in the planning.     For the kayak angler, opportunities are spectacular.      There are all the usual targets but then there are some seasonal options that are a thrill.

Redfish action should be fantastic.    The glut of runt redfish from two springs ago are all bullies now.   And this after they went into hyperspace: That class of fish is here, on nearly every grassflat around the region and they…are…obnoxious!      Action on this species should be spectacular for months to come but historically for me:    November and April are two of the best redfish months there are.

Cooling waters also means a surge in Speckled Trout action.    Great action if you knew where to go all summer, they are not closed to harvest anymore for November and December as they had been for a long time per Florida regulations.      If you have no skills using lures for inshore species, now’s the time to build confidence and “start with trout.”      They are abundant and they will eat anything that is placed in front of their faces.   I like any 12 Fathom soft plastic on a medium to light weight jighead.

King mackerel are obtainable by kayak unless vicious fronts crash through one after another or the winds are high (over 15).   If the pattern is mild with plenty of light wind days, the kayak angler can paddle out to some fun action on large kingfish.    A deep water activity, be safe on these outings and this is probably not the best choice for beginners.      One of the biggest problems is in the handling of the fish.    A kingfish brought in a kayak can be like walking on broken glass.    If you have on good shoes, clothing that covers your legs; this gives you a better buffer against those razor blade teeth.    Just be aware of the challenges of bringing up a king mackerel on a deck with limited space.

Sheepshead will be a fantastic target for months to come.   They may be on the shallow flats part of the month but before December arrives they should be ganging up everywhere that barnacles grow.    Silver trout and whiting will be another arrival to the Tampa Bay area.   Fantastic action for kids and adults, they are dependable targets once their massive schools arrive.

The kayak angler paradise:   The negative low tides of late Fall and winter.    Get into those remote, cutoff areas and enjoy the “fish in a bowl” scenario with no other intrusion than other kayak anglers.     Great year-round:   December can have awesome negative low tide action beating out the even colder months.

In the Big Bend of Florida’s Panhandle, Robert Baker at TnT Hideaway, The chill of December will create challenges, but the fish will be there: Will you dress warm enough and get out after them?  The region will have opportunities for trout, redfish and also other options like drum and flounder.     Don’t pass on opportunities to go!

In Northeast Florida: Action is holding up for redfish, trout but falling off for flounder.  The challenge for the next few months will be weather, but we have places to get out of the wind and still have great kayak fishing outings.   To the south, flounder will be possible but in our area count on sheepshead and redfish to be the best targets.

In the greater South Florida area:  Happy holidays!   And happy fishin’!     The Everglades will provide action for a lot of species- Trout, redfish and snook; plus tarpon, goliath grouper and sharks.    .    Pelagics will continue to be available.    Bottom fishing for bigger reef species is also an option but must be done smartly with safety as priority “1”.

The East coast of Florida, “Snook were not hit as hard in the Sebastian Inlet area due to more locations to hide as compared to the snook in the Mosquito Lagoon where they do not have as deep of water to hide. Trout look promising. Trout seem to be recovering nicely although I believe they were affected more so than the snook in the inlet and flounder in the Indian River during this time of year along with 20 – 30 lb black drum feeding under bridges near pilings while the smaller 4-10 lb black drum will be sunning themselves under mangrove trees. Schools of larger sheepshead have already begun to take over the potholes in the grass flats.  Look for reds, trout and pompano warming themselves up during the mid day on the grass flats so you don’t have to hurry and get out of bed so early in the morning.”   area. You can rest assure the redfish are multiplying as usual without any effects. Look for pompano

The tip of the month: For the easy release of various fish- Bend down the barbs on your lures.  With bent down barbs, trout can be easily released without touching them at kayak-side.   From the low to the water position, when you bring a fish up to the side of the kayak, get a hold of the leader and slide your hand down (carefully) to the jighead.   Without the barb, you should be able to angle the hook shank so that the fish is removed from your lure without even having to touch the fish.