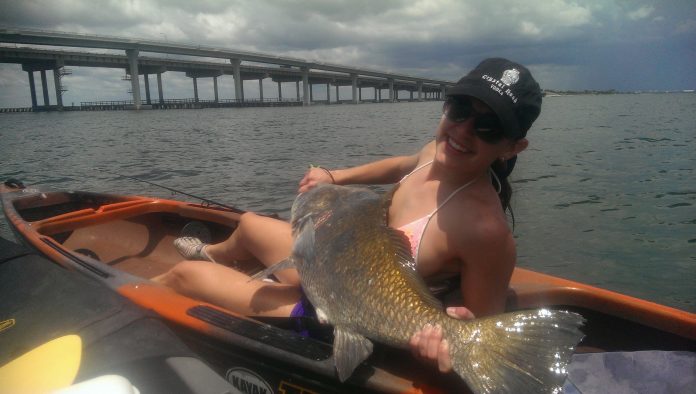 For most kayak anglers, December marks the time for “bundling up” a little more.   Good fish will be caught.   Everything depends on the weather.   Break out the waders and other dry gear and as I like to say “stay dry, stay warm.”   Get good wind and tide forecasts, “dress for it” and get in on the action!

All over the map action:   December will have the start of opportunities not really seen since last April.    For the local kayak anglers, it’s that time to consider pulling out the wintertime gear (which you may actually use this month).

The action for speckled trout and redfish should be consistent around the smoother weather periods.  Action for species like sheepshead, silver trout, whiting will become easy.  November indicated that there would be outstanding sheepshead action with herds of these striped bandits seen on the grassflats.   Natural baits like fiddler crabs or fresh shrimp work best but they can be tricked on flies.   Silver trout and whiting are a channel/pass option that are great light-tackle action and fantastic for fish fry events or for making some smoked fish spread.     Sundown is ideal for aggressive silver trout action but they are cooperative most of the time and literally “hit anything that’s moving”.    Whiting can be caught on lures like the Silly Willy, which is more effective because their mouths are so small.    Shrimp sunk down to the bottom on #2 hooks will also be automatic whiting hookups.

Redfish:   Their numbers are still not what they should be.  The short fish of spring are growing up!   Mid-slot fish are a regular catch.   Use the 12 Fathom Buzz Tail if the 3-inch mullet isn’t getting as much attention.   With fewer baitfish around, the diet changes to shrimp which the SlamR mimics better than the Mullet.   This same formula applies to speckled trout.    If the weather stays mild: Expect December to have continued flounder opportunities, primarily around the Gulf passes.

Bring along some shrimp.   Black drum and sheepshead are difficult to catch on lures, shrimp kept on ice can be put in front of these species and provide some fun action and also some dinner fish.   Use a 1/0 hook with a split shot up about a foot from the hook.   Tail hook the shrimp and just catch to the fish and let them find it.   Smaller drum meat is like redfish and if cooked right is delicious.   Sheepshead can be filleted out, cut into chunks and then Taylor Style, dipped in egg, then flour and thrown in hot oil.   Flip several times and when the flour turns a golden brown, they’re ready to eat!

Trout are easy.    Closed for a while, their numbers and size are increasing.   Imagine how it would be if everyone obeyed the rules.  Just looking for action?  Silver trout and whiting make a big appearance every December.

Around the Panhandle region, there will be a mix of catches such as speckled trout, redfish and flounder, grouper, snapper.  Speckled trout is open in the region from Fred Howard Park to the north so anglers up in the Nature Coast, Big Bend and the Panhandle can still harvest from that fishery.  Northeast Florida also is open until the month of February for the harvest of trout.  Brad Stephens of Sunjammer’s Watersports expects to sell plenty of cold weather gear for the die-hard kayak anglers that live in the Panama City area.  Around the Bend, The Big Bend: Robert Baker of TnT Hide-A-Way in Crawfordville says that some huge redfish, lots of trout over 20-inches and flounder up to about 17-inches have been caught.

In the Southwest “Suncoast” area of Florida, Steve Gibson with Southern Drawl guide services (Sarasota area)-  “December is a prime month for fishing Sarasota Bay. Spotted seatrout, Spanish mackerel, bluefish and pompano action is heating up over the deep grass for those casting D.O.A. CAL Jigs with paddle tails or flies. Night snook action can be good on most any moving tide.”

In Northeast Florida: Action is holding up for redfish, trout but falling off for flounder.  The challenge for the next few months will be weather, but we have places to get out of the wind and still have great kayak fishing outings.   To the south, flounder will be possible but in our area count on sheepshead and redfish to be the best targets.

The East coast of Florida, December is a good month to go.   We have opportunities for cooling water action:  Redfish, trout, flounder.   Also:  Sheepshead will be found feeding under bridges near pilings and docks while the black drum will be hanging out under mangrove trees in canals. Flounder will be along drop offs throughout the rivers. Snook are in most of these areas as long as the water remains warm enough.  Redfish can be found out on the flats.  It is definitely a good month to go.

South Florida:   Expect a great month of fishing for offshore kayak fishing.   King mackerel, dolphin and amberjack.  The Everglades will provide action for a lot of species- Trout, redfish and snook; plus tarpon, goliath grouper and sharks.   Pelagics will continue to be available.    Bottom fishing for bigger reef species is also an option but must be done smartly with safety as priority “1”.  Safety:  Use the right kayak for the more extreme trips.

The tip of the month: For the easy release of various fish- Bend down the barbs on your lures.  With bent down barbs, trout can be easily released without touching them at kayak-side.   From the low to the water position, when you bring a fish up to the side of the kayak, get a hold of the leader and slide your hand down (carefully) to the jighead.   Without the barb, you should be able to angle the hook shank so that the fish is removed from your lure without even having to touch the fish.  Bent down barbs:  Easier on you.  Easier on the fish.