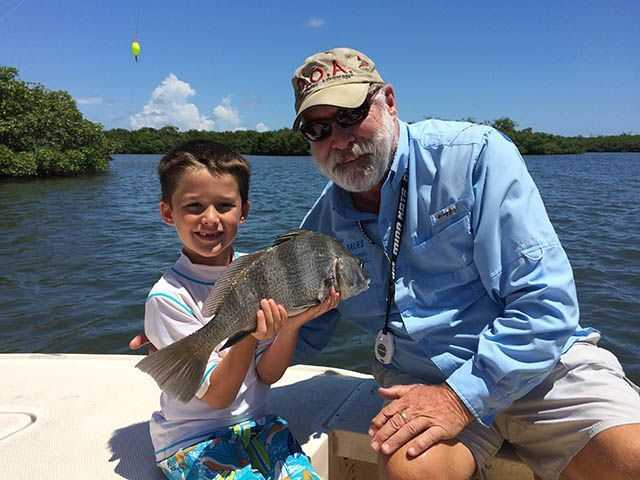 Inshore:
The dog days of August are here and it has been a hot summer around the Treasure Coast.  Getting out early or late is the key to success this time of year.  Water temperatures range in the mid to high eighties.  Plan your adventures carefully as lots of rain around the area has been the norm lately.  Watch the forecasts and plan accordingly.  Be aware of the water quality issues and choose where you fish carefully.  Enjoy August and the fishing along the Treasure Coast.
Fort Pierce fishing has been good lately.  A good variety of species have been plentiful for us recently.  Philip and Leo joined me early one morning this past week.  After trying first for redfish, we moved to deeper water and found lots of snapper to keep the guys busy.  The mutton snapper have been nice size up to 16″.  The ladyfish moved in and the whole river was going off so we spent some time playing with hundreds of ladyfish.  We are getting off the water by noon before the afternoon heat beats down on you.  It was an awesome morning for the guys.
Look for redfish to be hanging under docks and mangroves in the shady areas.  DOA shrimp is the best choice for lures when fishing these areas.  Snook fishing around the jetties and bridges have been best at night or early mornings.  Snapper are plentiful in the river.  Lane, mutton and mangrove snapper can be found around channel edges, bridges and docks around the area.  There are some nice drum and sheepshead hanging in the same areas.   Trout has been the best to the north of Fort Pierce on top water lures early and DOA shad tails later.  Jacks and ladyfish are abundant and great for the kids!
Don’t forget the sunscreen and plenty of fluids.  It’s hot out there and keeping hydrated is very important this month.  Have fun and enjoy your time on the water.
Remember, as always, fishing is not just another hobby……it’s an ADVENTURE!
Good Fishing,
Captain Charlie Conner
www.fishtalescharter.com
captaincharlie@fishtalescharter.com
772-284-3852