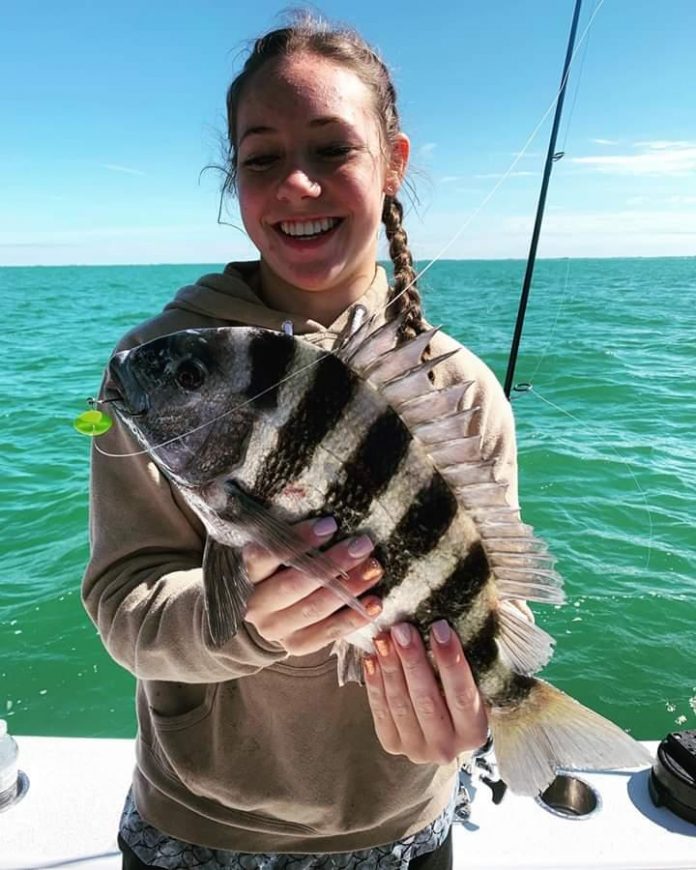 Sheepshead generally are thought of as winter fish, and most big ones are caught when water temperature hovers in the 60s. But there are plenty of “juniors” around right through the heat of summer, and they’re even better eating than the adults found from December through March in inshore waters. Sheepshead are in the porgie family. Their distinctive stripes have earned them the nickname of “convict fish.” Biologists note that these bands are not symmetrical. One side may have five black stripes, the other side six stripes. And they may be of varying widths. Sheepshead get their name from their ugly teeth. Archosargus probatocephalus is the Latin term that translates to “head like a sheep.” That makes it one of the few Latin names easy to understand. Like humans, they have incisors, molars, and grinding teeth. These stubby, white teeth are strong enough to grind up oyster and barnacle shells, and can cut through monofilament in a second. Sea walls and bridge pilings are a favorite hangout. The green mussels now infesting Tampa Bay attract sheepshead by the dozens to such structures. They’re also found around oyster bars, artificial reefs and the edges of the shipping channels. Tackle for summer sheepshead can be fairly light: 15-pound-test line for casting gear, 10 to 12 pounds for spinning tackle. Most use about 2 feet of 25-pound-test mono as a leader, and long-shank 1 to 1/0 hooks to avoid cutoffs on the sharp teeth. Sheepshead are nibblers and usually travel up and down a piling, eating the mussels, barnacles, oysters and other tidbits that grow there. If there is current, use a sinker, from 1 to 3 ounces, to keep your bait right beside the piling. Fresh shrimp is the easiest sheepshead bait to get, available at all bait shops. To avoid having it instantly nipped off your hook, use a piece about an inch long and thread it on your hook with the point barely exposed. A whole shrimp is a wasted shrimp when it comes to sheepshead fishing. Set the hook at the first sign of a nibble. All sorts of small crabs make great sheepshead bait. You can catch them by burying coffee cans flush with the sand at low tide; crabs wandering around the flat will fall in and be trapped. Sand fleas, dug up with a sand-flea rake at the edge of the surf, also work well, and many anglers are doing well by raking green mussels off the pilings and using them as bait. And if you’re fishing beside a sea wall or piling, scrape some of the clinging barnacles and mussels off with a hoe or the end of your net handle. This chumming will bring in lots of fish – it’s the secret to most big sheepshead catches. Sheepshead are finicky eaters. Their nibbling is so tender that even a big sheepshead can suck the insides out of a sand flea or completely nibble away a shrimp without your feeling it. The key to hooking them is to keep your line taut and set quickly at the hint of a nibble. Sometimes you won’t actually feel a bite. Instead, your rod may get just a little bit heavier. Sheepshead don’t jump, leap or run much, but their flat sides act like a pie plate in the water, making them tough to haul to the surface. And while the hooked fish is swimming toward China, it also is gnawing on the hook. A thin wire hook just might break off. Though thin wire hooks best, stouter saltwater-duty hooks are a better choice for ‘heads. Keep them sharp with a file. With light line, you’ll need a landing net to hoist your catch aboard. You can’t “lip” a sheepshead if you want to keep your fingers and thumbs. Grabbing them around the shoulders also is risky, because of their numerous needle-sharp dorsal spines. Dick Bowles, a longtime University of Florida music professor and avid angler, recalls the time a sheepshead got the point of its dorsal fin stuck in the side of the little plastic trash can they were using for a live well. The fish wriggled, the spine went completely through the plastic, and 15 gallons of seawater poured out. The limit on sheepshead in Florida is 15 daily, with a minimum size of 12 inches. Most of the fish you’ll catch in summer will weigh 1 to 2 pounds, just right for the pan. Fillet your catch, remove the skin, and then make a vee cut to lift out the dark-red lateral line from each fillet; it has a too-fishy taste. The firm white meat that’s left is some of the best seafood you’ll ever eat.