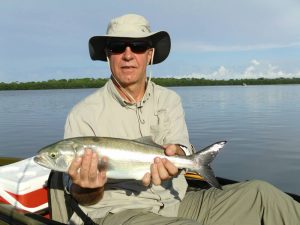 Usually accidental catch than targeted, if you pay attention, you may be able to target bluefish effectively in your area of Florida.    Differences around the state:   On the Atlantic side the bluefish is often more of a surf fishing opportunity. Elsewhere, you will find bluefish in other locations.

My area, Tampa Bay, has bluefish opportunities fully 8 months of the year.  For their size, bluefish are brutes.    They fight harder and longer than most fish.    Their teeth, rows of saws.  Their jaws:  Pure power.  I’ve always told people “Keep your fingers away from these ones, they’ll cut a finger clean off.”

Leader line, 20 pound isn’t going to cut it.     30 pound will do much better.    A bluefish trick:   Use hard plugs.   Treble hook lures, the bluefish rarely get their teeth anywhere near the leader line. 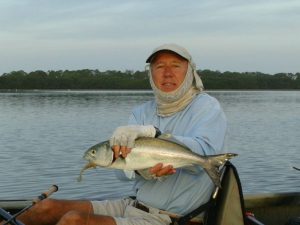 They like it fast.  They like it slow.    You try different things until you do something they like.  Their are times you get strikes when you are moving the lure exceptionally slow.   Their are times where you won’t catch any unless you really pick up the pace.   They go at it hard.  You are not going to lose a lot of line to a bluefish, but they will make some strong short runs.   They will routinely crush topwater lures.
Where are they?    Blues like oily baitfish.   Truth be known, they will eat anything that moves.  If you know where the baitfish schools are you will often also encounter bluefish.    For me, I can tell you that there are two main areas around the Tampa Bay region to target bluefish.   The passes.   The troughs.   What is a pass?  A pass is a break in land where the water passes into the interior from the Gulf of Mexico.    What is a trough?   Around the flats, troughs are the only locations that hold water on the negative low tides.   The bluefish travel these paths at all tides.     Deeper water usually with sand bottom.
Want to eat them?   Here is one IDEA

For me, I will kill them when I catch them.  Not because I’m wild about eating them.  I’m not.   What do I do with them.  I put them on the smoker. I leave them on the smoker.   I will thoroughly smoke spanish mackerel.   Bluefish, add another hour under heavy smoke.  I will not eat the meat as-is.   It will be FISH SPREAD (see link if you want to read about smoked fish spread).     On the other ingredients?  I go heavier on that stuff then I do with any other fish.   Much better eating fish, it is the opposite, I go lighter on the other ingredients. 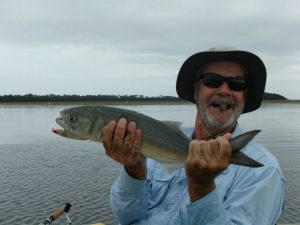 Bluefish are a target that aren’t necessarily reliable but once you have found them you should be able to work them for awhile.   They are fun to fight because they exhibit some real power.
More on BLUEFISH
Neil Taylor
Owner and guide:  www.strikethreekayakfishing.com
(Cell) 727-692-6345  LivelyBaits@aol.com
Owner and site administrator:  www.capmel.com