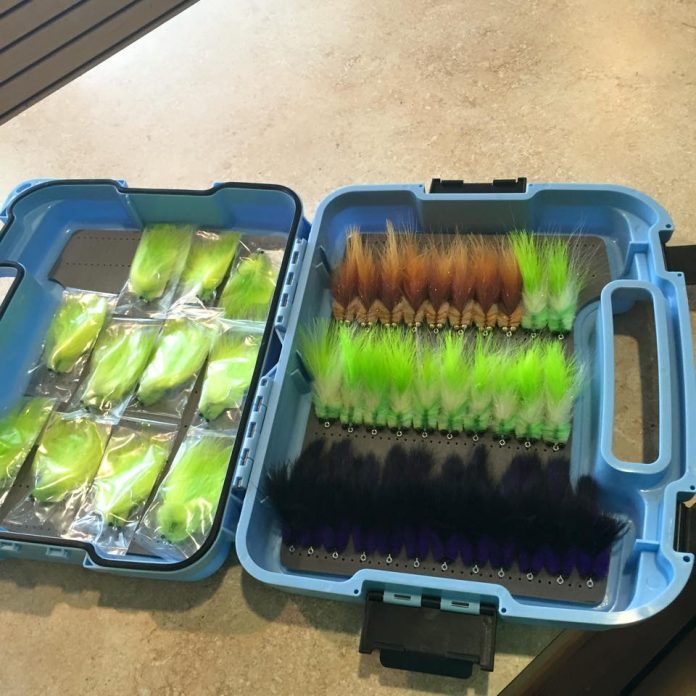 I am asked this question more frequently than any other by both new as well as more experienced fly fishers. They are asking for a key to make their fly more appealing to the fish. The question sounds simple enough, but the answer is rather complex. If I said use a six inch slow strip with a little pause, does that mean that the fly will move six inches and hesitate slightly? Maybe, but unless several rules are followed, the fly may not move at all or at a much more accelerated rate.

Good principles of line control will transmit movements of your stripping hand to the fly. Stripping is the term used to cause desired fly movement when the non-casting hand moves the line in a direction from the tip to the handle of the fly rod. In saltwater fly fishing, the rod tip is rarely used to give the fly action. What are some of these principles, and how do they work?

First, it is important to remember what pattern we are fishing and duplicate those movements. If using a crab pattern for redfish, a very slow movement of an inch or two may be all that is needed. Baitfish patterns may require long strips to mimic a small fish trying to escape from the jaws of a predator. These movements are very different. The crab imitation will always be close to the bottom, so immediately moving the fly in the upper water column is counter productive.

Let’s begin by making sure that proper casting rules are followed. The better you cast, the more easily action to the fly can be transmitted. On the forward cast, with the rod properly loaded, a crisp stop is used to unload the rod and complete the cast. After the stop, the rod is lowered as the line settles to the waters surface. If you let go of the line with your non-casting hand, you are already in trouble. The line should slide thru your fingers and closing your fingers on the line at the proper time will give you control of accuracy, similar to when your thumb touches the spool on a baitcasting reel, or your index finger feathers the line on a spinning reel before touching the spool to stop the lure and direct where it will land. As the fly hits the water, is everything in a straight line? Is the rod pointed at the fly and is all slack eliminated? Is your rod tip close to the water, or several feet from the waters surface? To properly transmit intended movements to the fly, the rod tip must almost touch the water. The slack caused by having the rod too far from the water will prohibit any line hand movements from affecting the fly. If you are holding the rod tip a few feet above the water, a long strip will not move the fly at all. If there is slack in the cast and the line looks like a snake on the water, moving the line to give the fly movement will be ineffective. Of course, if your leader collapsed on the cast, you will get the same poor result. Keep everything in a straight line with slack eliminated.

Tidal movement and wind direction are other factors. If the tide is coming in straight toward you, and you have eliminated slack in the cast, a long strip may just remove line slack created by the advancing current with the result that the current only drifted the fly in your direction. The length of the strip may have to be two, or three times what is needed to get the desired result. Just stripping enough line to keep in contact with the fly may be adequate with a crab or shrimp pattern as it drifts into the strike zone of your intended quarry. Any slack present will prevent you from feeling the take. Having the wind at your back as the tide comes toward you will move the boat and further prevent the control you desire. When fishing from a boat with the wind in your face and the tide coming toward you, the drifting boat alone may give the fly enough, or too much movement. When the tide is moving away from you, casting at an angle, much the same as you would when fishing a river, may give even a baitfish pattern enough movement to trigger a strike. You can mend line, move the line close to the rod tip up current, or make a reach cast in the same direction to give you better control.

When you can’t actually see the fly, which is frequent, concentrate on the end of your fly line to gage how your stripping movements transmit to the end of your line and ultimately the fly.

Certain species of fish seem to prefer different actions. Colder water will make some fish more lethargic, preventing them from using much energy to chase a fly. Jacks, barracuda, and Spanish mackerel will loose interest if a baitfish pattern is not really moving. Trout, reds and snook will be more selective and often prefer a certain action that you must duplicate.

Give careful consideration to these recommendations the next time you go out with the long rod. Concentrate your efforts on trying to understand what your intended target is seeing at the end of your leader. I’m sure that observing these rules will increase the number of strikes and hookups to a level that will pleasantly surprise you.

A FFF certified fly casting instructor, Capt. Pat Damico, guides in lower Tampa Bay as well as surrounding water offering fly and light tackle trips. He can be reached at 727-504-8649, or through his website www.captpat.com where more information is available. 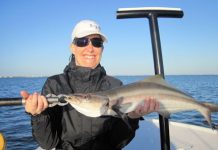