Thank you for reading this Flamingo Paddle Fishing Report. Nothing like the Everglades, although getting to or from Flamingo is becoming a traffic nightmare.

After picking up my wilderness permit from the rangers Monday morning I loaded up the Bang-O-Craft and headed to Cape Sable. My plan was east cape two nights and middle cape two nights. The weather had other ideas.

The kayak and the Bang-O-Craft!

I had to stay east of east cape because of the wind and waves. Fortunately the kayak served as a dinghy so I could anchor the boat off the beach a way, which kept it from getting pummeled.

The waves meant the boat needed to be off the beach.

The Bang-O-Craft, happily at anchor.

I had some time to walk the beach. The shells are amazing! The amount of plastic there, especially abandoned commercial fish gear, is close to appalling.

A shorty snook, the first of many, and a hockey-puck jack fell for my little jig that evening. After darkness fell I stayed up long enough to enjoy the stars a bit and see two satellites. Beat from a long day, I soon crashed.

As soon as it got light I was up, eating fast and loading up for the day’s fishing. After anchoring the johnboat I started paddling. I planned the trip to take advantage of the incoming tide. No one told the water. I fought current the entire way. Crocodiles of all sizes jumped off the bank upon my approach. Between the crocodiles and the pterodactyl-like blue herons it felt a little like Jurassic Park. Even sounded like it- Scraw! Scraw! Scraw! Did not see a Tyranosaur, though.

I couldn’t tell if the wind caused it or not, but the water was dirty. Between that and the wind, sight fishing with a fly rod, what I hoped to do, was impossible. Perhaps a half-dozen nice snook were spotted, all after blowing out. A single redfish tail went up and right back down again. The fly rod remained untouched. By lunchtime no bites had happened.

After lunch the current of the now incoming tide pushed me between two islands. Blind casting a DOA Shrimp produced the first bite of the day, a dinker snook. I got a dozen or so there, one after another, before realizing I was in the nursery. I went hunting again.

I found nothing but large reptiles (Where’s Steve Irwin when you need him?) until I got another dinker snook blind casting a small jig with a chartreuse twisty tail. At this point it was getting on in the afternoon. I waited at that spot for the tide to turn, catching small snook, until deciding to paddle against the current again to get back to the johnboat. You would think there would be a decent snook in there, but no, all little guys. Oh, and a solitary, lost, seatrout.

The stars again were spectacular, the Milky Way in as much glory as you’ll get in south Florida, and three satellites to boot. Venus was visible as soon as the sun set. The first stars to appear were Rigel, Aldebaran, and Sirius. Orion soon blazed. https://www.theatlantic.com/science/archive/2020/01/betelgeuse-supernova/605251/?utm_source=pocket-newtab The gems of stargazing, to me, are meteors, but not one did I see this trip.

The cold sent me to bed after a while. I struggled to stay warm all night.

The next morning the wind was still blowing hard. Florida Bay looked like a wavy bowl of mud. It was cold. My fishing spot didn’t work, and the weather kept me from trying much else. I loaded up and went back to Flamingo. I’d check the weather and if it were to stay the same, well, I would hit the road.

Forecast for the next day, north at 5-10. I got a campsite at Flamingo Campground. Once again the stars were awesome. Eight satellites!

In the fog I packed up, launched the boat, and headed out. After anchoring I negotiated a tiny creek in the kayak. The creek was full of fallen trees, and lots of snook. I was optimistic the lake would be good.

Where the creek entered the lake I tried a cast. Bam! Dinker snook. I tried the fly rod with a streamer. Every cast. A snook on every cast! It wasn’t heavenly. They were all dinkers. Again I was in the nursery. I went looking for real ones.

I poled and paddled around the entire lee shore of the lake and did not see a fish. I paddled the length of the lake, back to the creek mouth. The dinkers were still there, no big boys.

The spin rod I brought has a history. I purchased the rod, a whippy fiberglass cheapy, at Lechmere Sales in Cambridge, right after I got my driver’s license. After stripping all the hardware off I wrapped new guides on the blank and put a new handle on, and mounted a Mitchell 308 loaded with four pound monofilament on it. With that rod I fished for bass and pickerel, and sunfish and crappie and perch, and stocked brown and rainbow and wild brook trout. And carp. Let’s not forget them.

It didn’t get used at all for a long time and for years hung on our wall as “art”. Since our kids moved out we’ve been changing things around in the house. The old rod found its way back into my arsenal recently. I mounted a Shimano Nasci 1000 with 10-pound braid on it. That’s what I was using on this trip.

It wasn’t what I would have chosen to battle snook in a tiny creek loaded with lumber. But no way could I fly cast I there, so I went for it. The lure was the good old plastic shad.

The first several fish were dinkers. Then a real one hit.

The fish were in a lot of lumber.

The fish went around a mangrove root. The line was stuck in the little mussels on the root. I opened the bail while I worked the boat around the fallen wood to actually get at the place the line was caught and after fumbling around for a while got it free. The rod was passed around the root, the bail closed, the line tightened. The fish was still on.

There was more, similar stupid stuff, but I ended up getting the fish, by miles the best of the trip. I laughed like a maniac after releasing it, the whole thing was so crazy.

I cast the shad again. A bigger snook hit it. He did not mess around, immediately wrapping the line around a sunken branch and breaking off.

I considered re-rigging but that would have resulted in more fish with jewelry- no way could I get them out of that jungle. I paddled back to the johnboat, ran back to Flamingo, loaded up, and hit the road.

I left Flamingo at about 1440. I don’t want to say it was the ride from Hell, but it rained hard a good part of the way and I did not get home until 2200. The Florida Turnpike Authority ought to be ashamed of charging people to use that road.

St. Johns River addendum- last weekend I went to the St. Johns to try the noodle rod on shad. It got a workout! Fishing wasn’t hot, but it was pretty steady. About a dozen shad were released in about four hours, with lost fish and missed strikes of course. The rig used is pictured.

And that’s my Flamingo Paddle fishing report. I had a great time! Thanks for reading it! 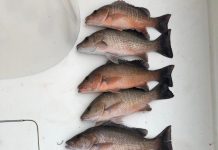