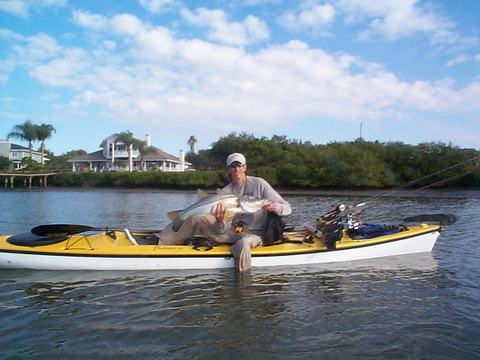 The fishing for late summer has been “better than most years” at the same time.    The fishing has actually just flat out been “easy” if you know the right places to go.    The fish went on the move a few times during August but the areas of best results always had mature sardine schools, something the late spring and early summer simply did not have in the shallows.  The redfish action has been good but will get exceptional anytime now.    Flounder fishing exploded in the past ten days after “steady” action for the past couple of months.    Speckled trout have been good for the larger fish if you know exactly where to go.     Some areas have been gold mines all summer, like nothing I’ve ever seen during the scorching hot Middle Of Summer.     With ladyfish, jacks, bluefish, some mangrove snapper and mackerel crashing the party: mornings of 70 to 100 fish catches were not unusual.     Again, it has been “that easy” and the very best months are on-the-radar.   That ends the “kayak fishing report” of this segment. 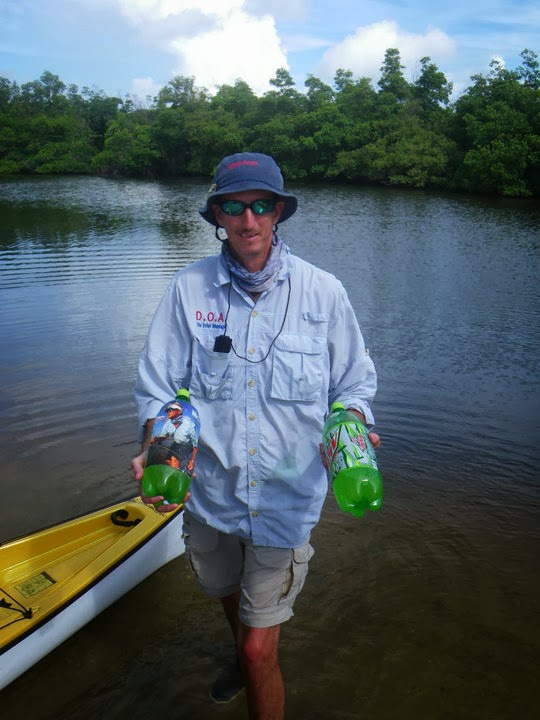 The fishing community suffered a huge loss recently.    On August 7th, at the age of 39, Mark Bellotte died.   Mark was a colleague, someone I initially got to know on the internet forums well before I met him in person.    Then, over the past four years, we regularly compared notes on a lot of different topics.    But mostly, we laughed.   We had a lot of social meetings but we also had plenty of one-on-one contact.    We made fun of anything and everything and quite honestly the thing I will miss the most is that smile he made (the one “minus any sound” while he was processing what would be a masterful reply).   But, without any doubt, that distinct voice and laugh will never be forgotten either.

I fished with Mark and Sharon one fine winter morning, going to one of his very special locations.   To get to where the best fishing was going to be, we had to drag the kayaks through knee-deep mud for about fifteen yards.    But it was obvious what these low-tide opportunities were.     I told him “I won’t tell anyone about this place.”   He laughed and said “I know.   You won’t even tell anyone about the in-plain-sight places you go to; I know you wouldn’t betray my trust on this spot.”   Note: I still won’t. Sharon and I showed that we had redfish and trout catching skills.   Mark did all of that and then this:

Mark was a gifted angler:  In action but in particular with his knowledge.    He was a student of the sport.   We argued about some fishing concepts but over time we realized that mostly, we did things very similarly.    I was honored that he referred people to me to book charters on a regular basis.    I always looked forward to seeing him at club meetings or boat shows where I knew he would be staffing a booth for Saltwater Angler Magazine.

Mark had some difficulties with his health a lot of his life.   The amazing thing was that most people didn’t know it.   He rarely talked about it.    He had talked to me about it and had said that he was grateful for his life and how things could have been worse for him.    He mentioned what it was that caused the heart condition.    I had to ask Sharon again about what it was.    Marfan Syndrome was what he had, a sporadic condition that explained his height and build but amazingly enough as I said before, many people said “I didn’t know he had health problems” (*which I am certain he would have been pleased to hear).    It is not surprising because he never complained; he just kept living and trying to create adventures in his life.   It was a disappointment to lose a friend who had not even reached his 40thbirthday but I thought Mark was much happier his last year or so than I had ever seen him.   [Definitely a far cry from the surly guy I fought with on internet messageboards and emails before we realized we were pretty much the same.   Wait, maybe I was the surly guy?   Probably both.]   With time comes understanding and appreciation.    We both knew that about one another without ever having to say it.    He lived his life nicely.   He was so amazingly generous and kind to others, something I knew but did not know the extent until I heard testimony from “coworkers” that he only knew for a few weeks who were in tears telling stories of things most people would not have done for someone they barely know.     There were the other things to watch at the memorial, the people feeling the most pain.    Sharon Magwood, even though they were not together anymore, devastated.     Members of Mark’s family: Hurting that they lost someone in their family.   Jeff Martin, a guy who was mentored by Mark “on all things fishing” but that meant nothing compared to the friendship they had.    Jeff was not realizing that he was going to speak at this gathering but for an impromptu speaker, he is among the best I have ever seen.     The last thing I will say, and I think he knew I felt this way; He was a delight to know.   I did not know him as well as so many other people there but very quietly, we knew each other pretty well.   Mark, it was a pleasure.

Note #1: The generous members the Bay Area Canoe and Kayak club made donations to buy a special seat for Jeff Wagner, one of the “Heroes on the Water” Suncoast chapter participants.   Jeff, a disabled vet, has his own kayak and this seat will make it possible for him to use his craft despite special physical challenges- paralyzed from the chest down.   Jeff is lucky to even be alive and it is AMAZING that he is going to be able to make this part of his routine.    I know that the club members will really enjoy seeing their donations in action when they see Jeff attending “Goomba” gatherings in the future.

News: I have also added “Topwater Adventures” and On-the-Water Clinics as new Strike Three Kayak Fishing opportunities.    Feel free to give me a call if you have any questions.