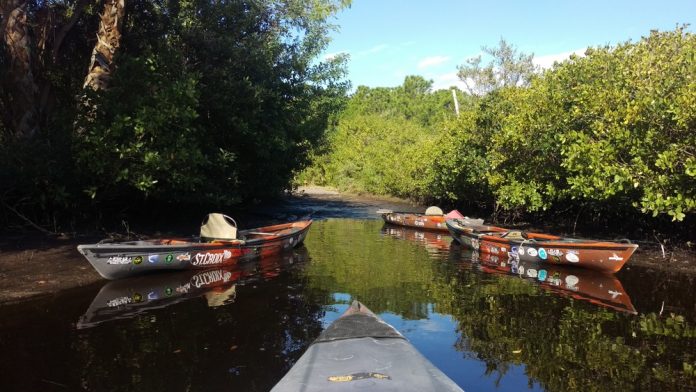 Things have remained strong on the south shore.  We had one slow day down there.  As it turns out, it was just slow everywhere for everyone that day.   No question, it remains one of my favorite places to go and has been for three decades now.  A little bit of everything, the south shore I like lacks a major boat ramp.  Traffic a little lighter, it is just a really great choice for fishing Tampa Bay.

Same as the last three reports:  Mackerel are still one of the top stories around the lower portion of Tampa Bay.   It is March and it is primetime for spanish mackerel.   From the piers:  Use the Silly Willy/Teaser rig.    Use 40# leader.    Jig it hard and catch one mackerel after another.    The Skyway Piers are absolutely easy mackerel fishing in the month of March.   From the kayak or boat:  Chase the birds.  Explosions on the water are often mackerel.   They are a delight.   They fight hard and they make one of the best fish spreads that I put out.   Fast moving speedster mackerel will be out toward the Skyway bridge.   Accessible from the Skyway Piers, they will also be intercepted by anyone in boats or kayaks by just “following the birds.”    Ladyfish, jacks and even a few bluefish are in this melee.    Keep a watchful eye out for cobia, which have been hooked in this area the past few weeks.

Sheepshead.  They can be caught but that is pretty much over for another year.  Next year looks good again for this species.    They get hit pretty hard but seem to sustain very well.

Trout fishing is very good still, and should be for another couple of weeks.  Then, it may get tougher for the next six months.    The 12 Fathom SlamR is #1 but we have had some good topwater action for these fish.    We get on strong action and we will catch trout nearly every cast.  Once it gets HOT HOT and stays HOT, the best opportunity to catch big trout is in the middle of the night.

Redfish are just not a great choice for down this way.  They haven’t been for most of the last three years.   Why?  No one knows why.  We just don’t see them like we used to.     When will that return to what it was five years ago???

Flounder action is HERE.    Jake caught a 22 inch fish.  We have regularly been getting flounder to 18 inches and this part of the Bay is the place to try for them.   Flounder just aren’t targeted hard.    I fish for them a great deal and do well on this species.  They had a long slow recovery after a crushing red tide in 2005.  But they are in great shape again now.  Slow and steady, ridden along bumping the bottom the savvy flounder anglers will have no problem catching more than a few.   You can’t catch ‘em all!  Flounder are going to drop lures during battle.   That is just a fact.   A landing net helps but the best bet is to “get them in the boat as fast as you can.”

Sharks are back in amazing numbers.    Don’t even consider putting a fish on a “stringer” unless you want to have a dangerous close encounter with these opportunists.   Best to have an action plan for accidental hookups to sharks.  “Cutting the line” is a phrase I hear a lot.    Long dehooking tools can help save a lure but for safety, a breakoff is a good option.   Cutting the line not necessary, point your fishing rod toward the hooked fish, grab the spool and pull backward steadily.   This should bring a knot to breaking strength.

To get detailed reports, check The Skyway Report on capmel.com.   Written by Paul Bristow every week, he keeps you on the heartbeat of the Skyway bite.  Get out and enjoy the easy action on the Skyway Piers!  Thank you Paul for dedicated, detailed reports EVERY SEVEN DAYS!