You Should Been Here Yesterday Fishing Report, March 14, 2018
POSTED ON MARCH 14, 2018 IN FISHING REPORTS
Mosquito Lagoon Sea Trout near Orlando

You Should Have Been Here Yesterday Fishing Report

It’s been several weeks since I’ve published a fishing report, but for good reasons. In its typical fashion, March has arrived with a furry of tailing cold fronts passing through Central Florida creating shifting wind events and fluctuating barometric pressure. These quickly everchanging conditions can make catching challenging, but if you hit it right it can be great, thus this week’s Your Should Have Been Here Yesterday Fishing Report.

As an example of the above statement my last two days of fishing were completely dissimilar. On Monday I shared an epic day of sea trout fishing with my clients Paul and Gage. A quickly approaching cold front had the winds backing down from the west between 15 and 20 knots, so our only option was to tuck into a western shoreline and work top-water plugs. Both Paul and Gage were excellent anglers and they walked the dog like pros. The pressure was dropping fast just before an approaching squall line and the trout bite was off the hook resulting in at least twenty very respectable sea trout brought to the boat within a four-hour window. It was clearly one of those epic catching events we experience occasionally. It also resulted in a cold and wet ride back to the ramp as we pushed the envelope on the storm a little too much.

Returned to the same location yesterday with fly anglers Jim Cash and his two sons Avery and Heath and the conditions and results were completely opposite. The front had passed, and the pressure was rising with strong winds from the north, and we could buy a bite. We spent the day hiding from the wind with Mother Nature calling the shots and in an 8-hour period we only had a few good shots at fish and ended the day with one puffer caught by Avery on a DOA Shrimp. During the day the winds continued to shift to the east and by the time conditions decided to settle down the charter was over.

Water conditions on the Mosquito Lagoon were good in the leeward areas with the water levels rising. These conditions resulted in easy access to the shoreline. I also noticed a lot of sliver mullet (finger mullet) returning to the Lagoon from their winter haunts.

During the past few weeks I’ve also paid several visits to the St. Johns River in search of our typical March schooling largemouth bass run, but 2017 was not our typical summer. For some reason, the bait busting schools of largemouth on the river have not materialized which is a big disappointment for me as they normally serve as my fall back on the windy days of March. Was it the extremely high water from the 2017 hurricane? Did they leave town, die or were the abducted by aliens? Who knows! We did have an exceptional American shad run this year, I was just looking forward to wicking some bass on the river this spring.

Lastly, I’ve had several queries about the cobia run. There were rays and cobia showing up around the first of the month, but since February and March switched places this year, the colder weather and snotty conditions have made it anyone’s guess. Once these weather patters spread out some and the seas become fishable we will see if the brown clowns are still around.

As always, if you need information, have any questions or would like to book a charter, please contact me. 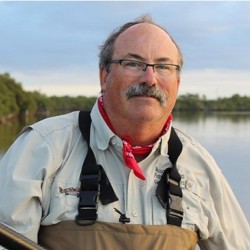