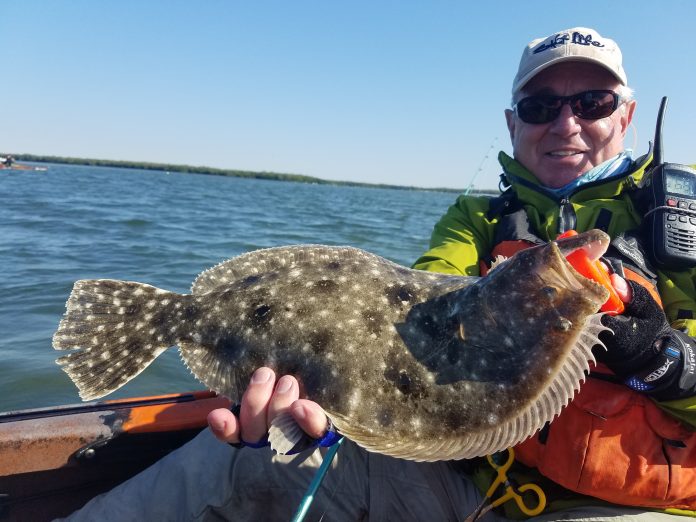 The lower Bay just continues to produce.    What a fishery!    My original fishing grounds upon moving to Florida have continued to provide steady action for just about everything that we have in these waters.

Although the flounder action has “steadied” they are still being caught pretty easily on the south shore.   Targeting and baits are pretty easy:   The 12 Fathom SlamR and Fat Sam Mullet on a 1/8 to 3/16-ounce jighead will locate and catch them.   Slow and steady, ridden along bumping the bottom the savvy flounder anglers will have no problem catching more than a few.   Keeping fish?  My own tip:  Let the 12 to 13 inch fish go and just keep the bigger flatties.   I wouldn’t mind seeing the rule changed.   I have said it in many of the reports the past couple of years-The amount of meat on those “barely legal” fish is pretty meager.  Put those back to let them grow and just keep the ones that are worth the effort.   They were better two months ago but as the baitfish returns I expect more flounder to be following.

Redfish action has been OK.    Not like they were ten years ago, if you get to the right spot, they are there to be caught.    Late afternoon feeds have been better than any other time of day but you cannot ignore that pre-dawn opportunity in the month of June (July, August and September.)  The 12 Fathom 3” mullet is still the best bait to throw to them.  On a 1/8-ounce jighead and cast a long distance, the thump you will feel in that foot and a half of water depth will be followed by a sharp bend in your fishing rod.   There are a lot of middle slot fish, some juveniles and an occasional bruiser.

Speckled trout action has gotten much better in the past couple of weeks.   Topwater lures will entice big trout but the 12 Fathom SlamR and Mullet will also get eaten.   It is not unusual to catch flounder while targeting trout (and vice versa).  So the action has been good even if the targeted species doesn’t cooperate.

Sharks are definitely all in these waters.  We had ladyfish attached and swallowed by big sharks this past week.    For the wade and kayak anglers, as I have said for years: Don’t even consider putting a fish on a “stringer” unless you want to have a dangerous close encounter with these opportunists.   You need to have an action plan for handling sharks.  Any action that keeps your fingers far, far away from the mouth of one of these fish, is a good choice.   “Cutting the line” is a phrase I hear a lot.    Long dehooking tools can help save a lure but for safety, a breakoff is a good option.   Cutting the line not necessary, point your fishing rod toward the hooked fish, grab the reel spool and pull backward steadily.   This should bring a knot to breaking strength.   Do NOT grab the braided line.   Braided line will cut you fingers.   Grab the spool.    If you have all the slack reeled up and you pull directly backward, you are going to bring a knot to breaking strength, separating you from the shark.

I haven’t seen for myself, but I hear that there are still mackerel at the Skyway Piers.    My guess is that it is also a good time to try for pompano.