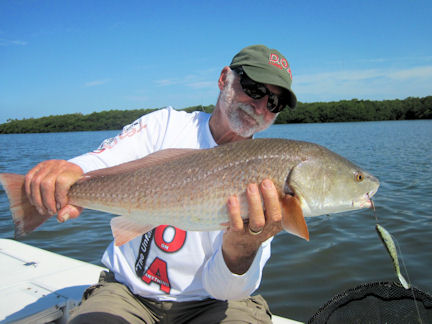 FRANK SARGEANT of The Tampa Tribune

Twelve years ago, Mark Nichols was a barefoot, vagabond kind of guy who spent most of his time snook fishing and was likely to get up tomorrow and bum a monthlong ride on a sailboat to the Caribbean.

Today, he’s a barefoot, vagabond kind of guy who owns a multimillion-dollar company.

He still spends a lot of time snook fishing and visiting the Caribbean – but only when his business allows.

“Sometimes, I’m not so sure the old way wasn’t better,” said Nichols, who until two months ago lived in the same, tiny Stuart apartment he had in 1989.

What has changed Nichols’ life is his crafting of a number of fishing lures out of soft plastic, originally done just for his own use. Today, the lures are sold by the tens of thousands all across the nation.

Nichols’ success is the result of two things, according to anglers who know the business well, such as Mel Berman of Tampa, host of Florida’s most popular fishing talk show on AM radio. <BR>

“He took the time to get his product just right, and then he devised a way of fishing it that’s different than just about anything on the market,” Berman said.

Nichols’ company, DOA (for dead on arrival) Lures, produces lifelike plastic shrimp and mullet, as well as an assortment of other marine life imitations. He adds farm-raised shrimp to the soft plastic, creating a lure that fish actually try to eat rather than reject, as they do with hard lures, he said.

Another possible reason for Nichols’ success is he’s a very enthusiastic fisherman.

“When I first started selling this stuff, I took it all along the Gulf coast and took people fishing,” Nichols said. “There’s a learning Nichols still stays on the road much of the year, giving seminars on using his lures at outdoors shows and fishing clubs throughout the southeastern United States.

“The only bad thing about the company doing so well is that it gets harder to find the time to fish and harder to find time to develop new lures, which are the two things I really like to do,” Nichols said.

Nichols has a simple philosophy on fishing his fake shrimp and baitfish.

“Fish them just like you would fish live bait,” he said. “That means you don’t jig them, you don’t reel them nearly as fast as you would any other artificial, and you fish them on a slack line as much as possible.”

With both the plastic shrimp and the plastic mullet, he prefers to fish areas with strong current that will move the lures naturally without the angler adding much action.

“Look for points on a flat, because the flow will speed up there,” he said. “On a falling tide, fish sloughs and channels coming off the flats.”

For trout fishing, Nichols recommends casting to the side of the boat, rather than down-current as many anglers do when jig- fishing from a drifting boat.

“Fish usually face into a current, because that’s where the food naturally comes from,” Nichols said. “If you cast straight downtide and bring it back up, you’re opposing the natural pattern, and you won’t catch many fish.”

He likes to make a cast across the current and let the flow sweep the bait in an arc, ticking the grass as it drifts.

“A live shrimp is going to be right in the grass, so that’s where you want the DOA,” Nichols said. “If it’s up in mid-water, you won’t catch much.”

He also suggests keeping close tabs on the line as the bait drifts.

“A lot of the times a trout bite is just a light tap on the line. If you don’t feel that tap and set the hook, you either don’t get the fish or he swallows it completely, and then you have to kill him to get the lure out.”

Nichols advises using fiber lines, which have much greater sensitivity than monofilament, to increase the ability to feel a strike. He likes 10-pound-test for the light spinning tackle that works best with the light-weight shrimp. He uses about two feet of clear 25-pound-test mono as leader.

Nichols also is a believer in a stealthy approach to connect with lunker trout, big snook or tarpon.

“When I can, I try to drift into an area without ever turning on the trolling motor,” he said. “These days, even though electric motors are quiet, a lot of fish are spooked by them because so many people use them.”

He said the best approach, when depth allows, is to wade to your fish.

“Wading gives you a much smaller profile, it’s noiseless, and you tend to fish slower and more thoroughly,” he said. “For big fish, you can’t beat it most places.”

For snook and tarpon, he also suggests using the current to deliver the lures.

“I like a bigger bait for bigger fish, so I’ve got some 5- and 6-inch models that I use for big snook and tarpon,” he said. “But it’s the same procedure – find the fish feeding in a strong flow and let the tide deliver it right into their face.”

By the dawn’s early light 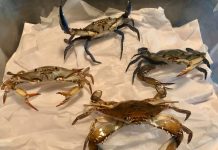 Hook In the Hand