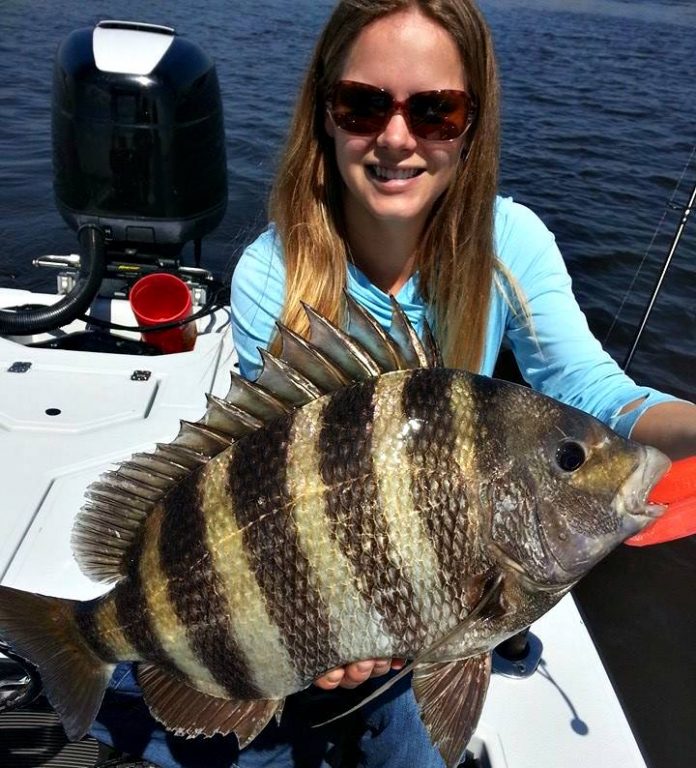 While others spend countless angling hours pursuing politically correct species, sheepshead enthusiasts go quietly about their business catching those tasty members of the porgy family. Yet, for some reason, the sheepshead is the Rodney Dangerfield of fish — it gets no respect.

One has to wonder why, because sheepshead can be very elusive, they put up a good fight and are ultimately a delicious dinner treat.

David Hack of Venice has focused his fishing passion on these striped “convict fish.” Known as “Mr. Sheepshead,” Hack fishes for them on rocky bottom along the Intracoastal Waterway and at the popular Venice jetties. For bait, Hack definitely has a preference.

“My cooked, frozen sand fleas work better than the live ones,” Hack boasted, “and they’re better than any other sheepshead bait.”

“I like the shiny chrome ones for sheepshead,” he said, “and always keep them sharp because sheepshead have really tough mouths.”

He also attaches a tiny freshwater-type bobber, plus a medium split shot on the leader. When fishing, he estimates the depth and sets his bobber so the bait is just off the bottom — then slowly lifts up to feel the strike.

Another angler who has been fishing for the sheepshead all his life is captain Woody Gore, a South Shore guide. Gore loved fishing while he was a teenager, often accompanying his Uncle Talbert to his bridge tender job at Tampa’s Platt Street Bridge.

“The nights were long and boring, so ‘Uncle Tub’ taught me to fish for what he called ‘convicts,’ ” Gore recalled.

Gore said his uncle would rig a short, but stout cane pole with 6 to 8 feet of braided fishing line, a heavy split-shot weight and a small hook.

“We would buy frozen shrimp, bust open oysters on the rocks along the river’s edge, or work the shoreline to catch a few fiddler crabs for bait,” he said. “Back then, the rules and restrictions were laid back so climbing down to the bridge fenders was not a big deal, especially if you knew someone.”

After five or 10 minutes of scraping barnacles with an old piece of galvanized pipe, young Gore would get plenty of chum in the water.

“We would bait up and lower the rig into the water, holding it still and close to the pilings,” Gore said. “It usually didn’t take long before you would feel a light bump or sometimes a hard pull. Then we’d just snatch up on the pole to set the hook.”

Across the bay, another sheepshead expert, captain Rick Frazier, has fished for these crafty fish all his life.

“I really like chumming for sheepshead with crushed Asian green mussels — shell and all,” Frazier said. “Then I use the green mussel meat as bait.”

Green mussels are an exotic species found in abundance throughout Tampa Bay. Frazier said some excellent locations in his area include the rubble piles along the north and south Skyway piers, the rock jetty at Albert Whitted Airport and just about all the fixed piers in the Bay area.

“To catch sheepshead, you need the touch,” he said. “It’s a matter of feeling the tension. Keep the rod tip pointed down to the water and slowly lift up. When you feel any tension, start reeling.”

Captain Jim Huddleston, a Clearwater/Dunedin guide, also prefers green mussels as bait. He fishes for sheepshead around pilings and docks with strong current, plus the channels such as those going into local docks, such as Fast Eddies and Pats Landing.

Sheepshead are around Florida all year, but the big breeders show up during cooler months and can be found congregating around close-in artificial reefs, jetties and other near-shore structures. Always allow some extra time to clean them.When filleting, you have to work your knife around a fairly complicated rib/backbone structure. Be very careful of the needle-pointed fins. Skin and de-bone the fillets once they’re off the carcass.

As for cooking sheepshead, you can broil or bake, or dip in egg and roll in your favorite coating — then fry to a golden brown. One favorite is to cut the meat into chunks and cook them quickly in boiling water seasoned with Crab Boil. Then just dip the pieces in drawn butter and lemon. When prepared this way, these crustacean-eating fish taste almost like very tender lobster or crab.

While others spend countless angling hours pursuing politically correct species, sheepsheaders go quietly about their business catching those playful, tasty members of the porgy family. The sheepshead is a fish that can be elusive as all get out. It puts up a good fight, is somewhat complicated to fillet, but ultimately a delicious dinner treat.

As with all members of the porgy family, sheepies feed on shelled animals, including many that have some pretty tough armor. To accomplish this feat, nature has provided sheepshead with an incredible set of choppers. Their molars are arranged in several rows to give them a powerful crushing and grinding capability. And, since these flat striped beauties regularly dine on crustaceans, one is most likely to find them crunching and munching on barnacle encrusted structures.

The technique for catching them is not really brain surgery. Just set up at a bridge, dock, marker or piling and start scraping barnacles. By the way, if you moved down to Florida from a northern state, you would have done well to bring along your old ice chopper. It makes an excellent barnacle scraper.

Once you begin dislodging the loose barnacles, it’s like ringing the dinner bell for those striped “convict fish.”  To coin a phrase, “if you scrape them, they will come.”

Next step of course is the fun part – catching them. As with most species, you need to place on your hook something the sheepies like to eat. This includes such goodies as fiddler crabs, the innards of oysters, shrimp pieces and yes, even barnacles themselves. In the winter, parchment worms are deposited on  Florida beaches. Grab yourself a bunch and head for your favorite sheepie haunt, because parchment worms are to sheepshead like a filet mignon is to us humanoids.

Now, that’s all the good news. The bad new is that these stripped quick-strike artists  give you but one chance to hook them. Some say that you almost have to “set the hook before they bite.” But once you get the hang of it (no pun intended) you should be able to snare your dinner’s worth of sheepshead every trip. Somewhat heavier and stiffer tackle should be used so that you can set the hook decisively.

Sheepshead are around Florida all year, but the big breeders show up during spring and early summer. These outsized brood stock can often be found congregating around close-in artificial reefs, jetties and other near shore structures.

Once you procure a couple-three of these chunky fish for the cooler, allow some extra time to clean them. In order to slice off the fillet, you’re going to have to work your knife around a fairly complicated rib/backbone structure. I personally think they taste best when skinned.

As for cooking sheepshead, believe me, you can do no wrong. Most just dip the fish pieces in egg and roll in their favorite coating, frying ‘til golden brown.  Sheepshead also broil or bake exceptionally well.  One of our favorites is to cut the meat into chunks and cook them quickly in boiling water seasoned with Crab Boil. After cooking dip the pieces in drawn butter and lemon.  When prepared this way, these crustacean eating fish taste almost like very tender lobster or crab. Yummy!

So, when you get burnt out on snook, reds and trout, you might want to try your hand at catching those often elusive, frisky and very delicious sheepshead

The Science Of Flats Fishing