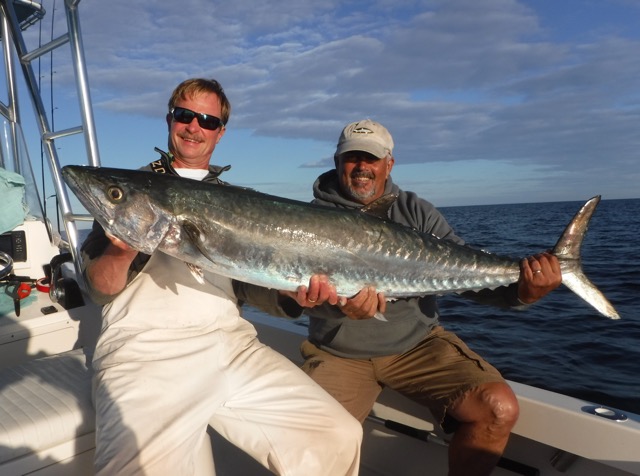 Is it January or September?  Last week, water temperatures reached 71 degrees in St Joseph’s Sound.  The large seatrout got confused and seemed to move off of their more predictable locations.  Large seatrout fishing is generally an easy proposition during the cooler months.  Yes, cold fronts consistently stop the fishing in it’s tracks but, after a few days of warmth, dependable fishing returns.  With several days in the eighties last week, it simply got too hot. Tonight promises a cold front however, and that should restore our dependable fishing. On the bright side, small amounts of whitebait did show up with the warmth.  Trout fishing will be easier if this bait remains available.  If not, it’s back to the select shrimp.
Amidst the action on trout, other species have made occasional appearances.  The list of species caught in the last few weeks include several species of shark, pompano, black drum, redfish, sheephead and of course, bluefish and ladyfish as well. There are certainly fish to catch out there.  To increase the likelihood of success, pay close attention to the weather patterns and the tides.  Good water movement always triggers fish to bite but, right behind a cold front, they won’t.  Typically days two to three days after a cold front, with strong tides, produce excellent fishing.  Until mid March, when higher water temperatures generally return for good, focus on this weather / tide combo to maximize your fishing success.  Good luck and good fishing.
Captain Stewart Ames GONE FISHING CHARTERSP.O. Box 541Crystal Beach, Florida 34681727 421-5291https://Tampa-Fishing-Charter.com