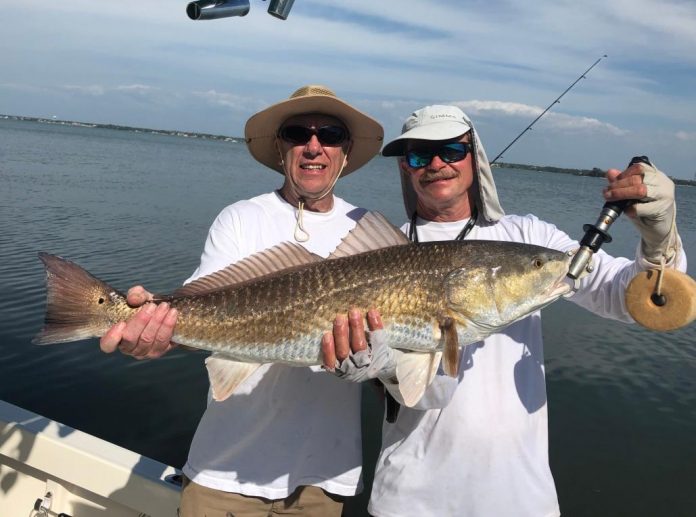 Fishing through the end of March was nothing short of exceptional with snapper, kingfish, Spanish mackerel, snook, redfish and seatrout all being a part of the weekly mix of species.  The highlights were kingfish within two miles of the beach.  Fishing for these by slow trolling thread fin herring and large pilchards was very productive for a few days until strong west winds pushed fish off shore.  Hopefully, they’ll make another pass close to shore before heading further north.
Inshore, the seatrout and redfishing was extremely good in terms of both fish number and size.  Catching a couple dozen large seatrout in a few hours was a dependable program and, on most days, several fish would push the 23 – 24 inch mark.  Whitebait was the best bait but shrimp and pinfish would also produce.  Unfortunately, these fish are probably a week or two from leaving based on current water temperatures. Big redfish were roaming the mangrove shorelines on high tides and on several trips, numerous fish in excess of 10 lbs were landed.  Even on days when the larger fish weren’t located, it was a safe bet that 10 – 12 fish would find their way to the boat….most of these firmly within the slot limit.  Both of these fisheries are, no doubt, benefitting from the closed season.  Expect a great inshore season of catching ahead.
With late March / early April water temperatures averaging higher than normal, snook have begun to eat with some consistency both in backwater areas but also out on the beach. Free lined large whitebait’s have been most effective. It will be interesting to see if snook have benefited as much from the recent, continued closure.  A slower growing species, it may take a bit longer to see the visible results but it’s a safe bet that fishing this year will be better than last and that it will continue to improve as the closure is extended.
Good luck and good fishing.

What’s happening with the redfish?