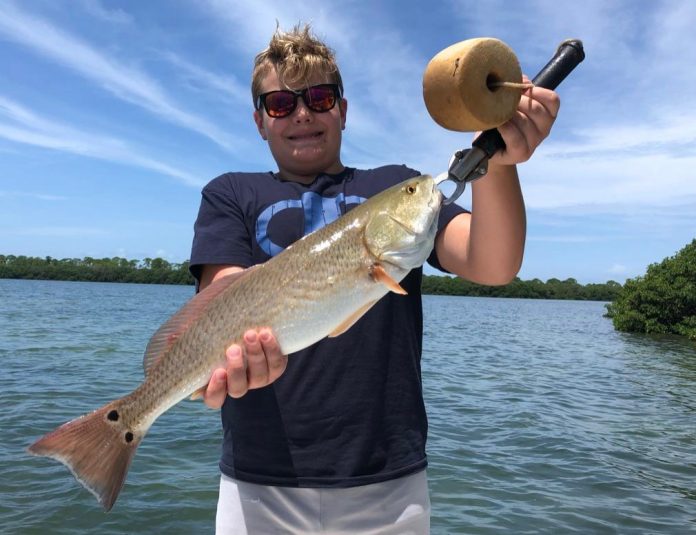 After the arrival of red tide in Mid-June off of Northern Pinellas County, fishing has been hit and miss.  Red tide’s first push into the area seemed to drive the redfish out and do significant damage to local baitfish populations, especially the grass grunts, although excessive amounts of dead fish were never seen.  As June came to a close, the situation was improving. Tropical Storm Elsa shut everything down for a few more days in July and it also appeared to bring some more red tide north. As July came to a close, it appeared that red tide was lightening up again.  Interestingly, the snook out on the beach seemed the least impacted and, on almost any trip, if bait could be caught and kept alive, snook fishing was OK.  The redfish populations along mangrove shorelines on Honeymoon and Caledesi Islands remained thin however. The only locations where redfish were caught during the worst days were along the main shoreline, on some spoil islands or up north of the Anclote River.  On a recent early August trip, redfish did appear to be starting to show up again as over a half dozen slot fish were caught.  Snook were still caught on the beach and most of the bait secured remained alive through the course of the trip. Hopefully, things are on the mend.
August is generally a slower month for inshore fishing so many local captains will likely be taking some time off.  Once the heat of summer passes, all should return to normal and then, moving into fall, nearshore fishing several miles off the coast will compliment an improving inshore bite.  Good luck and good fishing.