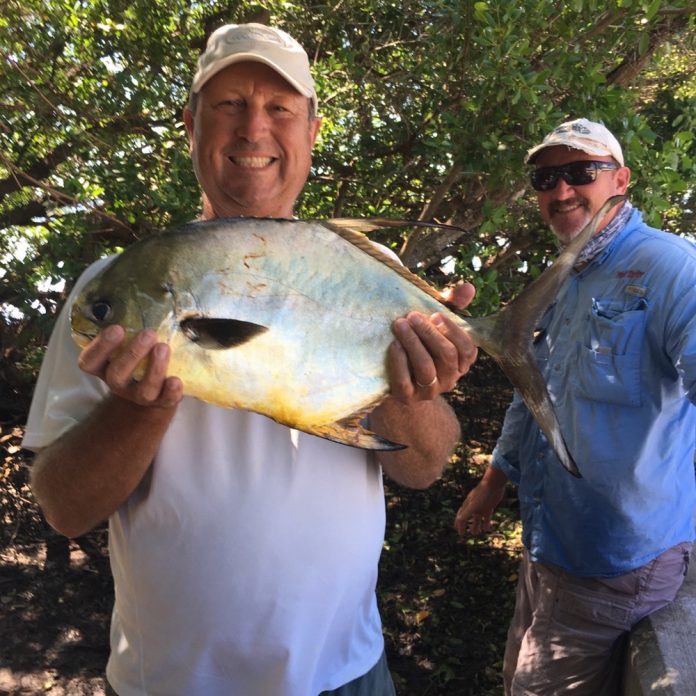 A glimpse at the month of November for kayak anglers around the Sunshine State:  excitement and nervousness rolled into one.  The October action has been so good for everyone pretty much statewide, the anticipation for continued action is high but “just what will the weather bring?”   November is a weather “lottery”, similar to March or April depending on where you are in Florida.   Still technically “hurricane season” will the weather be balmy like most of October?   Or will it be a steady string of early season fronts passing the Florabama area and pushing down the peninsula?   Will the baitfish stay inshore or will it migrate off?   These are all issues for the kayak anglers in many areas of the state.    Hopefully the weather gods cooperate and everyone, statewide, get to use their plastic boats a great deal this month!

The Tampa Bay region– Give thanks for one of the best months of the year to fish these inshore waters!    Watch for the great redfish schools of October to remain a focus off the Palm Harbor/Dunedin waters, though they may be a little more “spread out”.     Snook will linger in area creeks and canals and be a dock-light-option most of the month.

Many of the “tailing” fish that will be seen in the shallows will actually be black drum and sheepshead.   As the cold fronts continue to stack up and send the water temperatures down to where they will be most of the winter, watch for whiting and silver trout to invade local waters.

Go shallow and get out on the big negative low tides and follow the redfish right up the flat as the water rises.   With plenty of crabs and other crustaceans in the shallow mud, “tails” will tip off the location of feeding redfish.   Mixed in with the “redfish tails” will be sheepshead digging out the same meals the redfish are after.

Clearer waters make long casts a “clear advantage”.   Weedless lures like the 12 Fathom SlamR on The Edje jighead will work better in these situations.   If the lures are not getting strikes, add some Pro Cure gel inside the groove of the plastic tail and let the redfish “sniff it out”.

If the weather is really nice this month, fishing will be as easy as it gets.    The fun is in the planning.     For the kayak angler, opportunities are spectacular.      There are all the usual targets but then there are some seasonal options that are a thrill.

Redfish action should be fantastic.    The glut of runt redfish from two springs ago are all bullies now.   And this after they went into hyperspace: That class of fish is here, on nearly every grassflat around the region and they…are…obnoxious!      Action on this species should be spectacular for months to come but historically for me:    November and April are two of the best redfish months there are.

Cooling waters also means a surge in Speckled Trout action.    Great action if you knew where to go all summer, they are not closed to harvest anymore for November and December as they had been for a long time per Florida regulations.      If you have no skills using lures for inshore species, now’s the time to build confidence and “start with trout.”      They are abundant and they will eat anything that is placed in front of their faces.   I like any 12 Fathom soft plastic on a medium to light weight jighead.

King mackerel are obtainable by kayak in November unless vicious fronts crash through one after another or the winds are high (over 15).   If the pattern is mild with plenty of light wind days, the kayak angler can paddle out to some fun action on large kingfish.    A deep water activity, be safe on these outings and this is probably not the best choice for beginners.      One of the biggest problems is in the handling of the fish.    A kingfish brought in a kayak can be like walking on broken glass.    If you have on good shoes, clothing that covers your legs; this gives you a better buffer against those razor blade teeth.    Just be aware of the challenges of bringing up a king mackerel on a deck with limited space.

Sheepshead will be a fantastic target for months to come.   They may be on the shallow flats part of the month but before December arrives they should be ganging up everywhere that barnacles grow.    Silver trout and whiting will be another arrival to the Tampa Bay area.   Fantastic action for kids and adults, they are dependable targets once their massive schools arrive.

The kayak angler paradise:   The negative low tides of late Fall and winter.    Get into those remote, cutoff areas and enjoy the “fish in a bowl” scenario with no other intrusion than other kayak anglers.     Great year-round:   November can have awesome negative low tide action beating out the even colder months.

In the Southwest “Suncoast” area of Florida, Steve Gibson with Southern Drawl Kayak We look for improved snook, spotted seatrout and
redfish action in Sarasota Bay and surrounding waters. Water
temperatures should drop, causing gamefish to begin a feeding assault
in preparation for winter. Night snook fishing should remain strong.
In fresh water, we look for improved action on bluegill, bass,
speckled perch, shellcracker and channel catfish. Best spots should be
Lake Manatee and Upper Myakka Lake. Also, we’re anticipating a couple
of trips south to the Land of Peacock Bass. We’ve got a small lake
just east of Naples that holds a decent population of peacock bass,
plus monster bluegill, shellcracker, largemouth bass and Mayan cichlid.

The East coast of Florida,   November will continue to be windy as we transition into the winter months. As the cooler temperatures continue the water will cool as well. It is time to change your fishing tactics. Slow up your retrieves and practice patience and stealth. Trout will be found in deeper areas to evade the cooler waters in depths ranging from 3 – 5 feet. Look for them warming in sand holes on the flats and waiting for an easy meal to drift by. You might even find a few slot redfish in there too.  My favorite lure this time of year is the 12 Fathom SlamR soft plastic lure in Clear Gold Glitter rigged on a weedless Edge Joe in 1/16oz weight or weightless for stealth and a slow retrieve. Snook will be found along mangroves and drop off as well as back-bay areas. Breeder redfish continue to be found is large schools and black drum are starting to make a strong appearance in all of the northern lagoon system. I have been successful with top waters in the past for the reds and using a shrimp colored Buzz Tail for the black drum. Let the bait sink into the path of either fish and let them inhale it as they are searching the bottom for their next meal. Flounder will begin its annual spawning migration out of the Sebastian Inlet. First the smaller flounder will move and then the doormat sized will move after the water temps reach around 68 degrees. Tarpon have been caught in many parts of the river and will be found in many canals and areas like the Sebastian River.

In the Big Bend of Florida’s Panhandle, Robert Baker at TnT Hideaway, the October forecast How cold will it be in November?   That will be the big question.   Get ready to “dress for it” if you want to keep kayak fishing the upcoming months!   But, fish have to eat don’t they?

In Northeast Florida: Give thanks:  We have great fishing in northeast Florida.   The opportunities will be very dependent on the weather.   Cold fronts that stalled to the north last month will push through and we will likely fight peskier winds around the fronts and it will be difficult to fish every day like you basically could the past six months.   The fish are here and they are ready to be caught!  We have sheepshead, redfish, flounder and trout.  Get after them!

In the greater South Florida area:  The Everglades, Flamingo anglers continue to report strong action going into Fall and this month should continue that action.    Snook, not so great.   Fish are being caught but it is as if many of the fish have moved.   Tarpon are still a great bet and we have redfish but they are not particularly large.
Offshore, Palm Beach area, use caution.   That goes without saying for any trip but hypothermia becomes a bigger possibility if you end up in the drink.    Dress appropriately and make sure that you will still be able to float if you do go over the side of your kayak.   The buddy system is a must if you are going to fish offshore the next five months.

The tip of the month:
Why should I bend down the barbs on my treble hook lures?   Reminders happen regularly that make me happy I “crush the down, right out of the package.”  Safety is the biggest reason but it is also hugely instrumental in live releasing fish in a healthier state.    The cartilage of certain parts of a fish’ mouth can make I very difficult to get the hook out but if the barb is smashed down, this becomes a lot easier to achieve.   Do not underestimate the value of pliers for this process of safely removing a treble hook from a fish.  It keeps fingers a safer distance from the hooks and also gives you the grip and leverage to quickly separate the fish from the hooks.