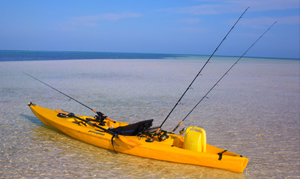 A glimpse at the month of November for kayak anglers around the Sunshine State:  excitement and nervousness rolled into one.  The October action has been so good for everyone pretty much statewide, the anticipation for continued action is high but “just what will the weather bring?”   November is a weather “lottery”, similar to March or April depending on where you are in Florida.   Still technically “hurricane season” will the weather be balmy like most of October?   Or will it be a steady string of early season fronts passing the Florabama area and pushing down the peninsula?   Will the baitfish stay inshore or will it migrate off?   These are all issues for the kayak anglers in many areas of the state.    Hopefully the weather gods cooperate and everyone, statewide, get to use their plastic boats a great deal this month!

Will Red Tide die out before it creates problems down south again?    Will the cold fronts bring fishing back in so many areas it hasn’t been good most of the year??  Trace amounts off Pinellas County.    Get cold.   Get cold fast.

It doesn’t get any better than this:  The conclusion of October and beginning of November, absolutely the best fishing of the year!   It has been a very challenging year with the worst conditions I have ever seen.       It will all hinge on the weather.    All reports from all regions have that same theme.   If we continue with a mild weather pattern and very few cold fronts, the action should remain exceptional.       November will also launch the awesome trout fishing that will continue until late April.    King mackerel?   Absolutely, it is the time to take this kind of trip.   A few days of light winds out of the east and voila!  Kingfish on the beaches!

Redfish, better for a very short period of time, remain in a threatened status.    People hit them too hard for too long and our redfish stocks are just not very good.   Sorry, but they’re not.   Six years ago, I could take you to catch redfish.   Many of them.   Now it is unusual to catch one.

Pompano and flounder:  An off year.   Hopefully with winter and then spring, the dice are rolled, things change and we have better results with these species.      I yearn for the action of the past.   It just hasn’t been good this year.

Picking up the rest of the slack in the region:  Bluefish, mackerel, jacks and ladyfish.    It is a little bit of everything right now and it will continue throughout the month of November unless major changes in the weather drive fish out and south, something we hope doesn’t happen at all (or at the very least, sometime around Santa Claus’ visit)

In the Southwest “Suncoast” area of Florida, Steve Gibson with Southern Drawl Kayak Fishing:
Cooling water temperature should improve action over the
deep grass patches around Sarasota Bay. I look for increased numbers of bluefish,
Spanish mackerel and pompano. The blues are getting bigger, with some pushing 8
pounds.  Redfish activity should heat up on the flats.
Freshwater action should improve, with bluegill, speckled perch and
shellcracker leading the way. I look for good action in Upper Myakka Lake, Lake Manatee,
Myakka River and Manatee River.


The East coast of Florida, go for the redfish.   Go for the drum.     In the right spots, flounder are an option.   Things just haven’t been spectacular.    They’ve just kind have “been.”    Hopes for improving conditions with falling temperatures.

In the Big Bend of Florida’s Panhandle, Robert Baker at TnT Hideaway on the Wakulla River:  http://www.tnthideaway.com/ .   If you are going to be in Panama City, stop in and see Brad and his staff at Sunjammers:  http://sunjammers.com/   TNT and Sunjammers are reporting great action throughout the region for trout, redfish and flounder.   How cold will it be in November?   That will be the big question.   Get ready to “dress for it” if you want to keep kayak fishing the upcoming months!   But, fish have to eat don’t they?

In Northeast Florida: Give thanks:  We have great fishing in northeast Florida.   The opportunities will be very dependent on the weather.   Cold fronts that stalled to the north last month will push through and we will likely fight peskier winds around the fronts and it will be difficult to fish every day like you basically could the past six months.   The fish are here and they are ready to be caught!  We have sheepshead, redfish, flounder and trout.  Get after them!

The Everglades, Flamingo anglers continue to report strong action going into Fall and this month should continue that action.    Snook, decent in the right spot.   Fish are being caught but it is as if many of the fish have moved.   Tarpon are still a great bet and we have redfish but they are not particularly large.
Offshore, Palm Beach area, use caution.   That goes without saying for any trip but hypothermia becomes a bigger possibility if you end up in the drink.    Dress appropriately and make sure that you will still be able to float if you do go over the side of your kayak.   The buddy system is a must if you are going to fish offshore the next five months.

The tip of the month:
Why should I bend down the barbs on my treble hook lures?   Reminders happen regularly that make me happy I “crush the down, right out of the package.”  Safety is the biggest reason but it is also hugely instrumental in live releasing fish in a healthier state.    The cartilage of certain parts of a fish’ mouth can make I very difficult to get the hook out but if the barb is smashed down, this becomes a lot easier to achieve.   Do not underestimate the value of pliers for this process of safely removing a treble hook from a fish.  It keeps fingers a safer distance from the hooks and also gives you the grip and leverage to quickly separate the fish from the hooks.

Need help learning how to kayak fish?   Hire one of our guides on staff for your region and take advantage of their knowledge and sharpen your own skills!   Steve covers the Sarasota/Bradenton area and Neil works the Tampa Bay area!