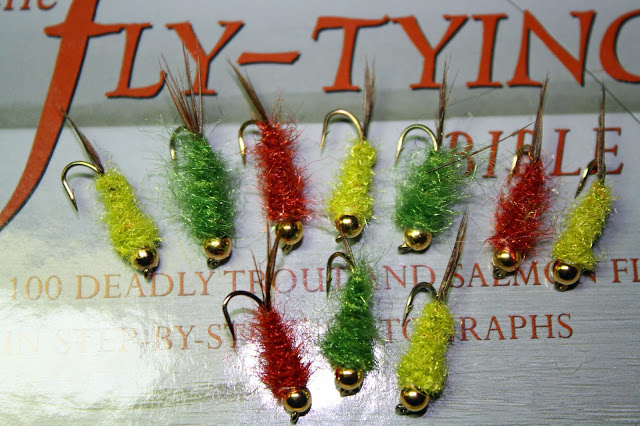 A few years ago, I traveled to northeast Georgia to fly fish for trout.

After a frustrating morning on Noontootla Creek, I asked guide Rex Gudgel for a little help.

“I know where the trout are, but I can’t catch them,” I said. “Why don’t you show me what you would do?”

He explained the nuances of nymphing to me. While doing so, he caught rainbow trout of 12, 17 and 26 inches.Gudgel, who was working at the time as a guide out of Unicoi Outfitters in Helen, Ga., surveyed the spot, then tied on a nymph and added a strike indicator. He cast upstream and allowed the rig to float down with the current.

After he left, I caught and released a 27-inch rainbow, the largest of my life.

But that wasn’t the highlight of my life. Don’t get me wrong. The trout was great. But nymphing lit the proverbial lightbulb in my head.

I thought the technique would pay handsome dividends back home in Florida where freshwater trout were little more than a dream.

Now, I’m not going to tell you that I’m the first person ever to use the technique in the Sunshine State. I’m sure others have done it. However, I have fished in Florida for more than 45 years and I’ve never seen anyone use the technique.Rather than trout, I envisioned big bluegill and shellcracker. I could see these panfish sucking up nymphs with reckless abandon.

There was no in between.

Sometimes, the bite lasted all day. Often it didn’t. We would usually head home by mid-morning.When the bite ended, it was time to go home.

That all changed when I began nymphing.

I started out using a popular trout pattern: a bead-head Hare’s Ear. It produced pretty consistently.

Later, I began developing simpler patterns that could be tied in just a couple of minutes.

I’ve used a number of different strike indicators over the years, but I’ve settled on  Lightning Strike Round Foam Strike Indicators (http://www.basspro.com/Lightning-Strike-Round-Foam-Strike-Indicators/product/15218/)  that I purchase at Bass Pro Shop. They’re simple and do the job nicely.I first began nymphing on Lake Manatee, a  body of water nine miles east of Interstate 75 in Manatee County. The lake can be tough, but if you invest the time to learn it you’ll find it’s loaded with fish.

This is no fancy system. I tie on my Gibby’s Snymph (simple nymph) and set the strike indicator according to the depth of the water. Usually I set it between 18 inches and two feet.

I cast it out (usually toward the shoreline structure), allow the nymph to sink, and then twitch it during a slow retrieve.

When the strike indicator twitches, moves or goes under, it’s time to set the hook.

What could be more simple?

I’ve used the technique in lakes and streams throughout Florida, and it has rarely failed. I have used it in Lake Manatee and caught hand-sized bluegill, large shellcracker, impressive speckled perch, largemouth bass to 4 pounds and channel catfish.

It has produced in The Everglades, the Myakka River, Upper Myakka Lake, Hillsborough River, Manatee River and other bodies of water.In a small lake east of Naples, I have caught gargantuan Mayan cichlid, hefty bluegill, shellcracker, largemouth bass and peacock bass.

A month ago, I launched my NuCanoe Pursuit at Benderson Lake near my home in Sarasota. I had only fish the lake a couple of times and not in the last 15 years. I caught a few bass near a spillway on Clouser Deep Minnows, then begain drifting down the east side of the lake. I started nymphing. I caught 25 bluegill, five shellcracker and a hefty channel catfish. I also lost another large channel cat.

I’ve also caught small snook on the Manatee River on the Snymph. Capt. Rick Grassett of Sarasota fished a small lake in Charlotte County with me and landed a small tarpon.

The Snymph has now become my “go-to” rig in fresh water.

The beauty of the rig is its simplicity.

It is quick and easy to tie.

Slide the gold bead on the hook, then place it in the vise.

Tie on the thread just behind the bead and wrap back to the bend of the hook. Then tie in the tail. You can use pheasant tail, squirrel or whatever.

Tie in a short length of copper wire, then began dubbing with Hareliine Dubbin’ Hare’s Ear Plus. Build up the body. Finish by wrapping the copper wire toward the bead and whip finishing the thread. The wire serves two purposed: 1. It segment the body; 2. I secure the dubbing.

I usually use tan, olive, brown and rust dubbing. I’m not sure color makes much difference, though.

When I head to a lake or stream to fly fish, I’ll still start out most of the time with a No. 10 popping bug on a 3-weight fly rod. I’ll stick with it until the bite slows or stops.

When that happens, I’ll pull out my 2-weight TFO Finesse rod and begin nymphing.

What I’ve learned over the years is when the topwater bites stops, your day is just beginning. 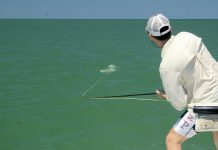