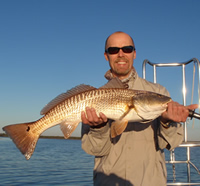 PANAMA CITY – This is the end of the line, where the cul de sac that is the Gulf of Mexico terminates. And like salmon stacking up against a dam, all the migratory fish that pour past the Bay area in spring wind up windrowed against the beach, as fat and happy as the Alabama tourists stacked on the sand. Though it’s a six-hour drive from Tampa to Panama City, anglers in need of a summer kingfish fix might find it well worth making. The thousands of kings that winter in the keys and pass close off St. Pete Beach in late March and April are all in Panama City, as are dolphin, blackfins, Spanish and other travelers. And they’ll stay until at least mid-October, when the first cold fronts drop the water temperature into the 60s and send them southward once again.

Because the fish are so tightly schooled, standard practice of area charter boats is to form a circle around them – diving birds and leaping bait mark the concentrations, and sometimes there are a dozen big sportfishers trolling around a school almost within casting distance of the beach. According to Jim Wilson, who hosts a local television fishing show and fishes area waters weekly, standard rig is a single live cigar minnow on a chain of three 6/0 hooks behind a small trolling head. A couple feet of No. 4 to No. 6 wire prevents cutoffs by kingfish teeth. This is pulled at about 4 to 6 mph, usually on 20-pound gear. Those after larger kings often shut off the motors and drift over hard-bottom areas or near marker buoys, offering live cigar minnows tail-hooked on a single treble.

Locals are somewhat spoiled by the usual summer abundance of kings; few even bother to chum, but limit catches are still the rule. It’s usually easy to catch your own bait with a castnet or sabiki rig, but if you’d rather not, you can call the bright orange “bait boats” on VHF radio channel 11-for $20, they’ll give you enough live cigar minnows to fish all morning. The kings are typically found anywhere from 100 yards out up to 20 miles off, and dolphin and blackfins often mix with them.

When the fish are close in, the charter boats offer trips at $75 an hour. The bottom drops off at about the same rate found along Bay area shores, with 50-foot depths a mile out – it’s not like the much shallower topography farther east. And the water tends to be glass-clear except after a strong south or southwest blow. Farther out, the water becomes much deeper, and the dropoffs provide some of the best big-game fishing to be found anywhere, with blue marlin more than 500 pounds always a possibility along with yellowfin tuna, mako sharks, sails, wahoo and other pelagics. This is obviously big-boat country, with most anglers relying on 30-footers or larger to make the run. St. Andrew Inlet is the primary access out of the numerous marinas in the Panama City area.

It’s a deep, well-maintained inlet, but strong outgoing tides bucking big seas can make it a challenge at times – and so can the wakes of big, fast U.S. Navy ships, of which you’ll see plenty. St. Andrew Bay provides interesting inside opportunities for those who prefer reds and trout to offshore action. It’s divided into three lengthy arms, West Bay, North Bay and East Bay, each with miles of grass flats, shoals and fishy-looking coves. One of the more interesting late- summer pursuits is looking for the schools of giant jack crevalle that sometimes come through the inlet and prowl the nearby flats for foot- long mullet. Some of these jacks weigh more than 30 pounds and provide an arm-twisting battle on light gear. Live mullet are the best bait, but they also readily attack big surface plugs.

Big “bull” reds also stack up around the inlets and at Cape San Blas, about 30 miles to the east, in late August and on through September – the fish typically weigh 30 to 40 pounds. Best bait is a live finger mullet or crab, locals advise. The fish move into the shallows to spawn, returning to the open gulf in October. One of the more convenient places to stay is the Marriott Bay Point Resort, which includes a marina, ship’s store and launching ramp under a mile from the inlet. There is also a launching ramp at St. Andrew State Park, on the beach side of the Grand Lagoon, also less than a mile from the inlet. The 1200-acre park provides camping, fishing piers, nature trails and a pretty, uncrowded beach of the area’s famed white “sugar” sand.

If you get tired of the fishing, all the diversions of Panama City Beach await – endless bars, go- kart tracks, miniature golf courses and everything that no-holds- barred zoning can provide. – For more information on the area, including hotels and marinas, contact the Panama City Chamber of Commerce at (850) 235-1159 or visit them on the web at http://pcbeach.org. For more on St. Andrew State Park, call (850) 233-5140.

Get Teasers And Use Them