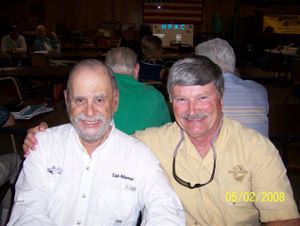 By Frank Sargeant, Special Correspondent
In the fast moving atmosphere of the world wide web, sites come and go in a flash, particularly those more dedicated to community-building instead of making money.

That appeared to be the fate of Capmel.com, a hugely popular site founded and run by Captain Mel Berman of Tampa, mostly just because he loved fishing and fishermen.

Berman put in hundreds of hours building the site and making it a focal point of fishing on Florida’s west coast.    Promoted by his highly rated fishing show on 970 AM, the site was a huge success with millions of hits logged each year.   Mel made a few bucks on it, but mostly he just did it because he enjoyed keeping his fingers on the pulse of all things angling.
But when Berman passed away at 81 in February 2010, the site began to languish.   An attempt made to convert it to a money maker failed, and not much happened for months afterward.

Taylor had retired from a career as a as a head umpire in minor league baseball, working the Triple A circuit for years.   When he stopped calling balls and strikes, he started calling his buddies to join him on kayak fishing trips on the flats.   It soon evolved into one of the more successful kayak guiding operations in Florida, thanks in part to regular promotion from Mel Berman.

“Mel helped me like he helped so many other anglers around Tampa Bay, and I wanted to keep the site going in his honor,” Taylor said.
Taylor took the time to learn web design, then invested 200 hours in rebuilding the site from scratch.

“I wanted to keep all the things in it that people loved from Mel’s time, but add upgraded software and faster, easier access to more information,” he said.

The site seems to be a success, drawing some 5 million hits a month- an incredible number for a fishing website.   Taylor said a few ads are starting to trickle in, not enough to compensate him for the many hours he spends as webmaster between charter trips, but enough to keep the site going.
“It’s drawing the eyeballs, so I’m hopeful we’ll spread the word and get the support from the industry,” he said.

There’s also the Angler Forum section, which draws tens of thousands of posts on hundreds of topics from those who want to vent about regulations and poachers to those who simply want to know where they can catch a flounder from shore.

The site is located at capmel.com.

Neil Taylor said kayak fishing has opened inshore angling to a whole new class of fishermen, and there’s no end in sight to the growth.

“It’s a chance to get some great exercise, you see the most beautiful part of the estuaries, and you catch that people in powerboats can’t even get close to,” Taylor said.

He said the tiny boats, typically 12 to 15 feet long and weighing 50 to 75 pounds, allow access to water only inches deep.   They can be launched anywhere without a trailer, they’re pollution free and they make no noise, so approaching close to spooky redfish, snook and trout is easy.

“I’ve guided school kids and I’ve guided 80-year olds,” Taylor said.   “We plan our trips so that there’s not a lot of hard paddling involved.”

“We launch close to our spots and we try to take advantage of wind and tide instead of working against them.”

Taylor said most of his guiding is done in Pinellas County but sometimes transports his kayaks to Hillsborough, Manatee and Sarasota counties.
“I can handle up to three clients at a time,” he said.   “I don’t like any more than that because I want to be able to keep a close eye on everybody and give them plenty of instruction if they’re not used to kayaking.

Taylor said winter offers some of the best kayak fishing of the year, as reds and trout stack up in creeks and potholes far back in the shallows.
For more information on Taylor and his guide business visit www.strikethreekayakfishing.com