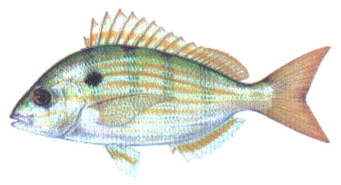 Noun:   A small fish, Lagodon rhomboides, of the porgy family, inhabiting bays of the South Atlantic and Gulfcoasts of the U.S.

There is just not a lot on pinfish really.   This might be the most comprehensive article on pinfish every published.

From Massachusetts to the Florida Keys, pinfish are alive and well.    Across the Gulf to Texas, they are prolific.    They live in seagrass.   They eat whatever they can catch.  Thus, generally considered a “nuisance bait stealer” pinfish have their place in the world.

From an inch long to seven or eight inches, pinfish are a baitfish for sure.   In the porgy family they are technically edible but who ever catches pinfish that are big enough for that?    I once did.   Under the Skyway, my friend Brian and I caught pinfish that were massive.    Occasional reports come in of people catching giant pinfish but it is rare.

They can be caught in a castnet but if you are doing it that way, use a wide spreading net with fast sinking weights.   Pinfish are TOUGH to catch with a small cast net.    I would recommend a rod and reel with small hooks.    Lots of people like sabiki rigs.    Those are tiny hooks with a fly tied on each tiny hook.    I like the tiny hook part but I would rather put bits of shrimp on it rather than rely on the “visual” of pinfish eating the sabiki.    I believe the scent is important.   The way I do it:   Three tiny hooks looped off to the leader with a split shot down at the bottom.   It is not unlikely to catch a pinfish on all three hooks.   (After initial publication, Tom Ross read and and wrote back:    Bacon and Squid on the hooks are ideal, something I can agree with because I have used both.   Tornado Tom, picking up my slack)

It gets to December, there are enough cold fronts, pinfish move offshore.   For those of us who like to throw soft plastic lures, it is a delight to not have pinfish ruining tails every other cast for a couple of months.  (Soft lures and the “Pinfish Factor”  http://www.capmel.com/plastic-lures-and-the-pinfish-factor/) 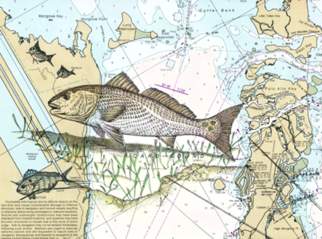 Pinfish are gold for many species.    Tarpon, cobia, snook, grouper, snapper.    It’s almost “you name it.”    I use pinfish for one thing:   Redfish.    Small, live and whole or using my scissors cut into chunks.    Pinfish are the very best redfish bait if you ask me.     Note:  You want fresh caught pinfish.     Pinfish caught the day before?   Nope.    I don’t know why, they only work if they were caught the day you are using them for redfish.     The average size pinfish:  My scissors cuts in two.   You get two quality baits per pinfish.   Durable, eat side may catch four fish before being lost.

A pinfish is a pretty durable live bait.    Better than others, survival wise.   They don’t require as much oxygen as some other fish and they are just heartier than other bait species.   Rigged live:   Through the tail (they swim down), through the bottom lip and out the top lip:  To swim freely in shallower waters.     Cut dead pinfish, just get the hook through a good part of the skin, anywhere.

You need to learn how to handle a live pinfish.   If you don’t, you will learn why they call them pinfish.     You want to handle them from the belly side.    The top of a pinfish is all sharp spines.

No question, if they came up with a commercial use for pinfish, a bunch of people are going to get rich.   They’re everywhere and they’re easy.   As a fisherman:  Do you use them?    If you like to connect on redfish, it is the easiest way to do it.     Cut pinfish means pinfish meat covered by skin on both sides making it a more durable bait.     Enough time for a major predator to get to it.

I used to catch pinfish for the tackle shops.   They sold them to the offshore grouper guys.     But the snook guys would buy them too in the dead of summer, when the snook are on the beaches.    Pinfish area similar to grass grunts.     More spines, but they are both solid baitfish.   The grunts are going to give you a noise the pinfish don’t put out.    Overall, they are about the same as far as a “big fish bait” goes.