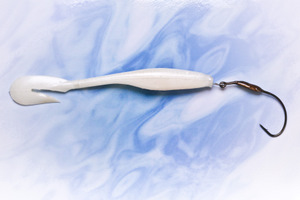 Plastic lures you use?  Help you I can
By Neil Taylor, strikethreekayakfishing.com

Pinfish are very much like Sand People.  When the waters are cooler in winter they spend several months offshore, but “They’ll be back, and in greater numbers.”

Dealing with pinfish is somewhat of a frustration but the experienced angler realizes that, in most situations, you are going to find this species of baitfish in the same waters as the other fish you would like to catch.  This is a food source for most of the inshore gamefish that you want to have eat your lures.    There are multiple pinfish dilemmas that exist.   For the live bait user, particularly the folks that use shrimp, the pinfish is extremely well known (and they thank you very much!) eating your offering as fast as it sinks down deep enough.    For the people who choose soft plastic lures, the pinfish is also fairly well known.

You must learn the ways of soft plastic baits if you are to come with me to pinfish waters.

As last winter began to wind down, and all that time with lures coming back 100% intact, a client asked me about the springtime fishing with lures.   Excitingly, spring is one of the easiest time of year to catch redfish on artificial lures with the fish “head up” feeding with the return of the massive schools of the “swimming baits.”   I also talked to him about our Saltwater Piranha, the ubiquitous pinfish (from Wikipedia pinfish “often are considered a nuisance bait stealer”) known for their aggressiveness.

Several weeks later, on schedule, they were back and they definitely returned and “in greater numbers.”    How aggressive are they?  As I told yet another client who kept feeling the “machine gun” rat-tap-tap-tap-tap of pinfish pecking at his 12 Fathom mullet tail:  “If they had arms and legs they’d climb in your boat, open your cooler and eat your lunch.”   Laughing, the guy said “really?” and I very dryly pointed behind him and said, “look out!”   Believability is demonstrated by actions because he turned to look.

So, the pinfish can be murder on plastic lures?   Yes, but particularly if your technique is overaggressive.   Pinfish do not actually chew through the plastic, they get a hold of it with their small, serrated teeth and stretch it until it rips.  The strike of pinfish is distinctly different from that of a gamefish you are trying to catch.   The angler that moves their lure slow and smooth will not lose their tail as often when a pinfish grabs it as long as they do not sweep the rod tip or otherwise increase the speed of retrieval.   The trick is to prevent the plastic from reaching the breaking point.    The very largest pinfish are probably going to have a greater ability to knock the end of your plastic tail off because they can get the paddle of the tail all the way in their mouth.   When it is the smaller version of this species in the porgy family, they will attack the plastic but not do lasting damage if your technique is right.   Anglers can switch to hard body lures, but they don’t have to.

It is worth repeating:  Surviving the Pinfish Factor has a great deal to knowing what their strikes feel like and not setting the hook or even pulling on the rod tip much at all.  Learning this technique saves money on buying replacement lures but ultimately it saves time and increases productivity catching the fish you do want to get.   Less time re-rigging with a new tail means more time actually fishing.

The plastic tails are made with the proper toughness to ensure that the natural action of the lure is best.   If they poured them tougher to withstand pinfish strikes, the action of the lure would probably be poor.   Try it out, adjust your technique and see if you can win the Flats Wars against the most obnoxious baitfish!

The Spoon: A fish catcher