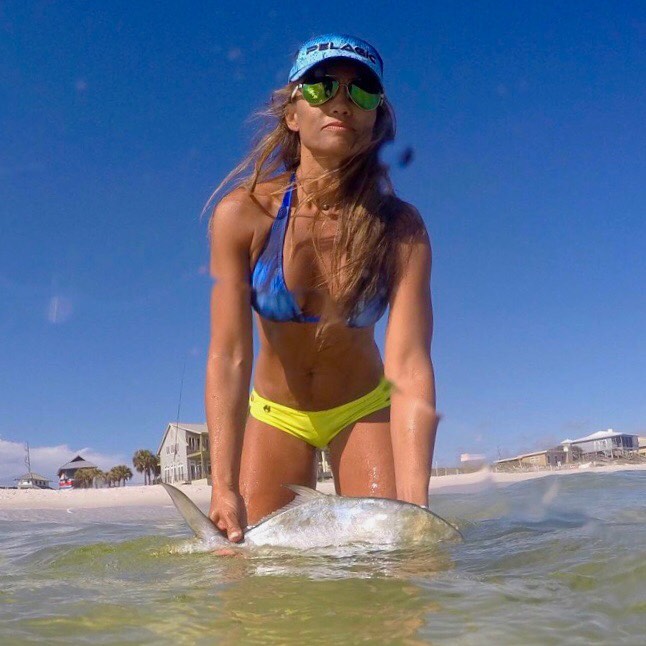 Pompano might be coming or going, depending on your point of view. But most west coast anglers agree they’re here now, and if you want to get in on the action, you’d better grab your sand flea rake and head for the beach. Spring is prime pompano time in our area, with fish that have wintered in deeper water or further south reappearing along the beaches, in the passes and along the outer edges of the grass flats. And pompano, unlike most other members of the jack family, are much admired on the table. More and more anglers each year are learning they’re well worth pursuing. Pompano has become much more popular with recreational anglers since the net ban of 1995 increased numbers, and catches for hook-and- liners increased steadily in the late 1990s, according to Bob Palmer, bureau chief with the Marine Fisheries Commission. However, fishery managers are now a little concerned that the recreational fishery might have gotten a little too productive. “On the east coast, where pompano is one of the prime targets, we are starting to see evidence of overfishing,” Palmer said. “We will ask the commission to look at this and maybe adjust the bag limits, either on that coast or maybe statewide, after hearings this summer.” Palmer said things appear to be better on the west central and southwest coasts, where pompano are not fished so heavily. But he said even here, most anglers who target pompano are not able to land the state limit of 10 per day based on surveys. “We find that most anglers are catching five or fewer, which probably means that we don’t have as many pompano as we should have for a really productive fishery,” Palmer said. In any case, most anglers who home in on these silvery gamefish will find more than enough to feed the family anywhere between Anclote Key and Captiva for the next several months. The no-brainer way to catch them is to buy a sand-flea scoop – basically a wire mesh basket on a pole – scoop up sand fleas in the slurry of the surf, where the water churns the sand as each wave rides home, and then fish these in the slough just off the beach on high tides, or beyond the first bar on low. Most anglers use a fish-finder type rig, a sinker of 2 to 3 ounces, with a couple of size 1 or 1/0 hooks on droppers above the weight. Pieces of fresh shrimp also catch pompano, as do fiddler crabs, but they definitely seem to prefer sand fleas to all other foods. They can be caught on artificials, as well; eighth-ounce to quarter- ounce jigs with short white or yellow bucktail skirts often do the job, as does the weird hairless jig known as “Doc’s Goofy Jig” made in St. Petersburg. Both types of lures are more effective if you add a small piece of fresh cut shrimp to the hook, and many anglers like to fish tandem jig rigs to give added casting weight. Pompano tend to show up on the beaches and in the passes in early spring, then move to inside sand flats and edges in summer and fall. Some anglers, including captain Roy String of Sarasota, have gotten very good at drifting areas of broken sand and scattered grass and catching them almost as though they were drifting for trout, by hopping jigs along bottom. In fact, Sarasota Bay has become sort of pompano central for our part of the coast, producing excellent catches for lots of anglers in recent years. The outside edge of the bar east of Anna Maria, known locally as the bulkhead, is another good spot to scout up some pompano, as are the outer edges of Jug Creek Shoal and Devilfish Key flats at Charlotte Harbor. One tactic formerly used by commercial netters can benefit recreational anglers; it’s “skipping” pompano. As an escape strategy, pompano can flip to the surface and skip along like a flat stone when startled. Running a boat on a slow plane just off the edge of the flats often brings up a skipper or two, and where you see one on top, there are likely to be many more below. Return with the motor off and start casting. However you go about finding them, pompano put up a powerful battle, like all members of the jack family. The fish typically weigh 1 to 3 pounds, though lunkers of 5 pounds occasionally are reported. Because the flesh is oily, pompano is usually not fried. Most anglers prefer to fillet and skin the meat, then bake it until just done, perhaps with a crab meat dressing