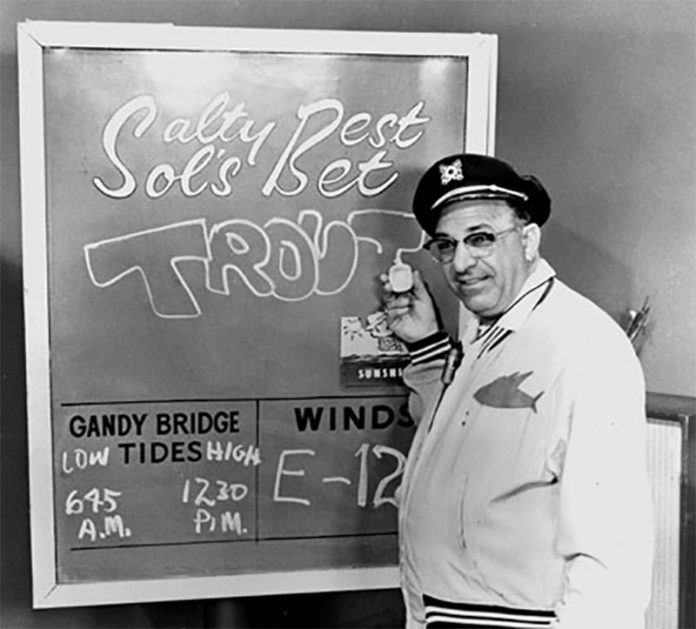 By KATHRYN WEXLER and CRAIG BASSE

TAMPA — “Salty Sol” Fleischman, a longtime radio and TV personality known as much for his fishing enthusiasm as his sports broadcasts, died Thursday (April 20, 2000) at South Bay Hospital. He was 89.

His career spanned 54 years, ending in 1981 when he signed off of WTVT-Ch. 13. Facing the camera night after night in his signature yachting cap, Mr. Fleischman was considered a bit of an eccentric among his button-down on-camera colleagues.

The Plant City native was equally known as a mainstay at Tampa social functions and community affairs.

“Tampa Bay has lost one of its favorite sons,” said Roy Leep, former weatherman and weather director for Channel 13. “Many generations grew up with Sol.”

Mr. Fleischman died of heart failure complications. He was admitted to the hospital several weeks ago and was in intensive care. He is survived by his wife, Helen; two sons, Sol Jr. and Marty; and three grandchildren.

“There’s never been a sportsman like Salty Sol,” said his son Sol Jr., a Tampa architect. “He liked being in the limelight.”

But for all his showmanship, Mr. Fleischman had a modest side. At his direction, there will be no funeral or memorial service.

“He just didn’t want people to make a fuss over him. But there’s probably not a venue big enough for everybody who would want to pay their respects,” Sol Jr. said.

Mr. Fleischman hadn’t planned on a career in broadcasting. In 1928, while still in high school, he got a job as a drum player for radio station WDAE when there wasn’t anything else to broadcast.

He got his break one day when the regular sports announcer was too tipsy to go on.

“Well, the guy hired to do the play-by-play was nipping at the bottle during one game early in the season and by halftime the public was calling and raising hell because his words were running together. They asked the band if any of us knew anything about football, and one member said, “Sol’s got a big mouth, why don’t you try him?’ ” he told the St. Petersburg Times in 1986.

Mr. Fleischman also used to say he had a million stories. “And half of them are true.”

He was with WDAE until 1956, when he joined Channel 13, except for a stint with the Coast Guard during World War II.

But what people found most memorable about him was his ability to tell a good fishing story. It was while writing a fishing column for the Tampa Times in 1946 that he began using the nickname Salty Sol. It stuck.

At times, he worried that his fishing expertise overshadowed the rest of his career.

“Now people think I’m just a fishing man,” he said in a 1979 interview. “I’m not ashamed of that, but fishing has been just a small part of my life. It hurts inside when people don’t remember I broadcast Army-Navy football and the Fighting Gators.”

His signature cap, battered and blue, was more utilitarian than flair, he said.

“I was already bald, and the makeup man wanted me to powder my head because of the glare. I didn’t want my head powdered. I suggested the cap.”

Through his career, he pursued his musical inclinations, appearing with the Tampa Symphony Orchestra and local dance bands.

As far back as 1974, he had tried to retire, but Channel 13 persuaded him to stay. He agreed to five short shows a week, and remained for seven more years.

After his retirement, he had turned to golfing over fishing due to health concerns. Nearly up to the end, he was working on his swing and reading books on how to improve his game, Sol Jr. said.

He occasionally fished for bass in a pond behind his house in Sun City Center, showing them to his cat, Tiny Mite, before tossing them back in the water.

And he worried — in vain — Sol Jr. said, whether his celebrity had all but disappeared.

“He was afraid people had forgotten about him,” said Sol Jr., “but wherever we go and his name is mentioned, people ask about him.”

Information from Times files was used in this report.

The “Mystery” of the DOA Shrimp