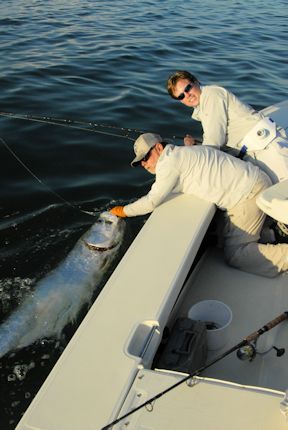 Capt. Rick Grassett’s Sarasota, FL Fishing Report for 6/26/2016
Anglers fishing with me, out of CB’s Saltwater Outfitters on Siesta Key, continued to have action with tarpon in the coastal gulf in Sarasota during the past week. Fly and spin fishing anglers both got in on the action, hooking up several times and bringing a couple of tarpon to the boat.
Joel Morsch, from Bradenton, FL, fly fished for tarpon in the coastal gulf in Sarasota several days with me early in the week. He had several eats and hooked up a couple of times. He fought one fish through numerous jumps and a long run before bringing the fish to the boat! 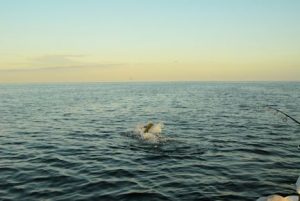 Terry Notari, from Longboat Key, FL, son Craig from Chicago and grandson James, from Austin, TX, tarpon fished a couple of days in the coastal gulf in Sarasota with me at the end of the week. Craig and James used both spin and fly tackle, getting some shots with a fly and James hooked up and landed a tarpon with spinning tackle on a live crab. He fought the fish through numerous jumps and runs before bring the fish to the boat. Great job!
Tarpon fishing in the coastal gulf should be good next week depending on conditions, as we head towards a new moon on July 4th. Outgoing tides in the afternoon should be good. Trout, bluefish and more should also be good options on deep grass flats of Sarasota Bay. Snook season is closed now on the west coast of Florida, but catch and release night snook fishing around lighted docks and bridges in the ICW with flies and DOA Lures should be another good option.
Tight Lines,
Capt. Rick Grassett
IFFF Certified Fly Casting Instructor
Orvis-Endorsed Fly Fishing Guide at CB’s Saltwater Outfitters
Orvis Outfitter of the Year-2011
Snook Fin-Addict Guide Service, Inc.
www.snookfin-addict.com, www.snookfinaddict.com and www.flyfishingflorida.us
E-mail snookfin@aol.com
(941) 923-7799