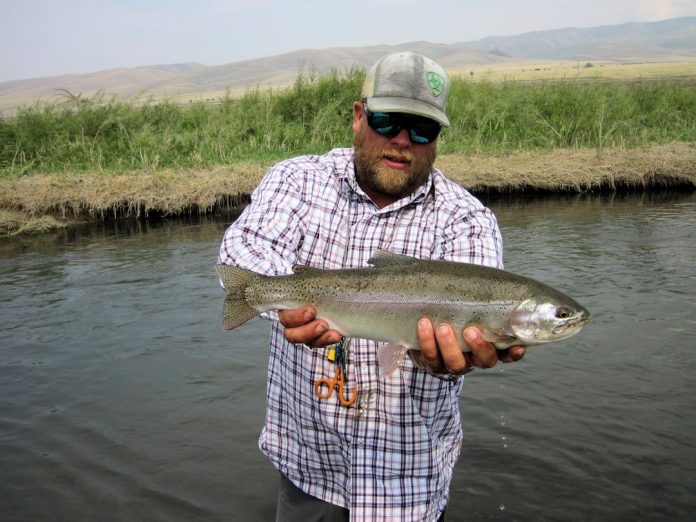 Capt. Rick Grassett’s Fishing Report for 5/25/2019
Anglers fishing with me, out of CB’s Saltwater Outfitters on Siesta Key, had some action with jacks and bluefish in Sarasota Bay and tarpon in the coastal gulf on flies recently.
Bill Morrison, from Anna Maria Island, fished a day in Sarasota Bay with me. The plan was to fly fish for tarpon in the coastal gulf, but conditions wouldn’t allow it. We found some birds working bait on a Sarasota Bay deep grass flat and he caught and released jacks, ladyfish and a bluefish on Clouser flies. Lew Murray, from Tarpon Springs, fly fished for tarpon on another trip with me in the coastal gulf. He had several shots, hooked up and fought the fish to close to the boat before it wore through the bite tippet. A great job on his first ever attempt at fly fishing for tarpon!
Early in the season is always a good time to discuss tarpon fishing etiquette. Give other anglers at least several hundred yards of distance in any direction since tarpon may be moving north or south. Running an outboard may not only ruin your own chances at catching a fish but for others too. Even though a 4-stroke outboard is quiet, it is no substitute for an electric trolling motor. Even electric motors should be used sparingly in deeper water and not at all in shallow water. The shallower the water, the more tarpon will be affected. Treat other anglers with the same respect that you would want to receive and everyone should have a chance to catch a tarpon.
Look for tarpon, Spanish mackerel and other migratory species in the coastal gulf. Catch and release night snook fishing is a dependable option and a good way to beat the heat. Our natural resources are under constant pressure from red tides fueled by agricultural and residential runoff, freezes, increasing fishing pressure and habitat loss and degradation, please limit your kill, don’t kill your limit!
Tight Lines,Capt. Rick GrassettFFI Certified Fly Casting InstructorOrvis-Endorsed Fly Fishing Guide at CB’s Saltwater OutfittersOrvis Outfitter of the Year-2011Snook Fin-Addict Guide Service, Inc.www.snookfin-addict.com, www.snookfinaddict.com and www.flyfishingflorida.us E-mail snookfin@aol.com(941) 923-7799 (office)

Plenty to target inside the bay