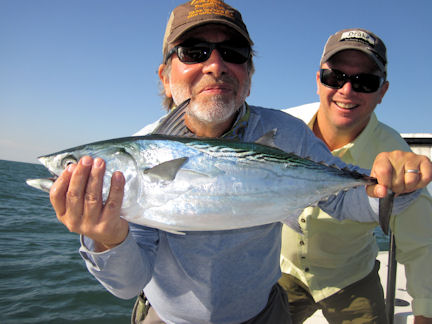 Capt. Rick Grassett’s Sarasota Fishing Report for 12/12/2021
Fly anglers fishing with me, out of CB’s Saltwater Outfitters on Siesta Key, had good action catching and releasing tripletail in the coastal gulf and snook at night in the ICW and spin fishing anglers scored with DOA Lures on snook, trout, redfish, jacks and pompano in Sarasota Bay recently. Bill Morrison, from Anna Maria Island, had great action catching several tripletail on flies on a recent trip with me. Dan Patterson, from Siesta Key, also got in on the action, catching and releasing his first tripletail on a fly on another trip with me. A friend, Jim Hazlett from Sarasota, invited me to fish with him offshore to hunt tripletail one day. It was a treat to catch a couple on a fly myself!
Cliff Ondercin, from Sarasota, fished the ICW with me on a night trip and had a banner night catching and releasing snook. It was cool, but the tide and the bite were strong! He caught and released numerous snook on my Snook Minnow fly. Great job! My brother, Joey Grassett from Seaford, DE, visited for a few days and we fished a variety of options from shallow and deep flats to the coastal gulf. We caught and released a few snook, trout and a red in shallow water on CAL jigs with grubs. We also caught and released trout and a couple of pompano while fishing deeper flats. The best fish were a couple of large jacks that were busting baits along a seawall that he caught and released on a CAL jig with a shad tail. Great way to finish!
Fish the coastal gulf when conditions are good and look for reds, snook and large trout in shallow water.  Fishing deep grass flats of Sarasota Bay is a usually a good choice for action with a variety of species including trout, Spanish mackerel, jacks, blues and more. Our natural resources are under constant pressure from red tides fueled by industrial, agricultural and residential runoff, toxic spills and discharges, freezes, increasing fishing pressure and habitat loss and degradation, please limit your kill, don’t kill your limit!
Tight Lines,Capt. Rick GrassettFFI Certified Fly Casting InstructorOrvis-Endorsed Fly Fishing Guide & Fly Casting Instructor at CB’s Saltwater OutfittersOrvis Outfitter of the Year-2011Snook Fin-Addict Guide Service, Inc.www.snookfin-addict.com and www.flyfishingflorida.us E-mail snookfin@aol.com(941) 923-7799 (office/land line)