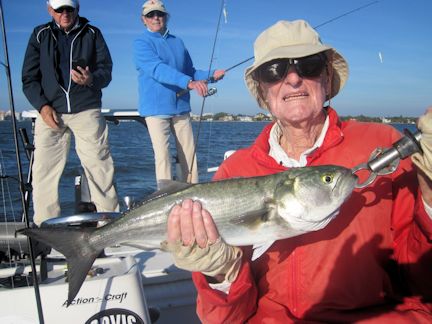 Anglers fishing with me, out of CB’s Saltwater Outfitters on Siesta Key, caught and released trout, bluefish, flounder and snook in Sarasota Bay and trout, flounder and snook in Gasparilla Sound on flies, CAL jigs with shad tails and 2.75” DOA Shrimp during the past couple of weeks.
Mark Wayde, from MI, fished a day in Sarasota Bay with me. We worked deep grass flats on both sides of the bay and he had good action catching and releasing trout to 18” and bluefish on Ultra Hair Clouser flies fished on an intermediate sink tip fly line. Marshall Dinerman and a guest, both from Atlanta, also had some action with me in Sarasota Bay with trout and bluefish on CAL jigs with shad tails.
Lew Murray, from Tarpon Springs, FL, fished a pre-dawn snook/flats trip with me in Sarasota Bay on Thursday. He started off strong with several snook to 26” caught and released on my Grassett Snook Minnow fly before daylight. We moved to the flats after daylight and he caught and released a few more on an EP Minnow fly pattern. Great job!
My friends Mark Nichols, owner of DOA Fishing Lures and his wife, Jenny Nichols, fished with me on Friday and Saturday. We fished the back country of Gasparilla Sound near Boca Grande on Friday. We had some action catching and releasing a few snook, including a 30” fish that Jenny caught and released on a weedless-rigged CAL Shad tail. A nice snook!
My wife, Karen Grassett, joined us on Saturday to fish the Sarasota CCA Photo All Release Challenge fishing tournament. It is a catch-photo-release format tournament for snook, reds and trout that raises money for conservation. Anglers must fish with identical boxes of donated lures or flies and all fish are immediately photographed and released to fight another day. We caught and released snook, trout, flounder and jacks on the 2.75” DOA Shrimp that was donated to the box by DOA Fishing Lures. Mark caught and released an over slot trout and Karen won the Ladies Trout division with a 19 ½” trout!
Tarpon fishing should take off as the water in the coastal gulf continues to warm. Trout, blues and Spanish mackerel should also be good options on deep grass flats and passes of Sarasota Bay. Snook season closes from May 1 through Aug 31 on the west coast of Florida, so please handle them gently and release them quickly. You should find larger trout in shallow water along with snook and reds when conditions are good. Fishing lighted docks and bridges in the ICW for snook with flies and DOA Lures continues to be a good option.
Tight Lines,
Capt. Rick Grassett
IFFF Certified Fly Casting Instructor
Orvis-Endorsed Fly Fishing Guide at CB’s Saltwater Outfitters
Orvis Outfitter of the Year-2011
Snook Fin-Addict Guide Service, Inc.
www.snookfin-addict.com, www.snookfinaddict.com and www.flyfishingflorida.us ;
E-mail snookfin@aol.com
(941) 923-7799