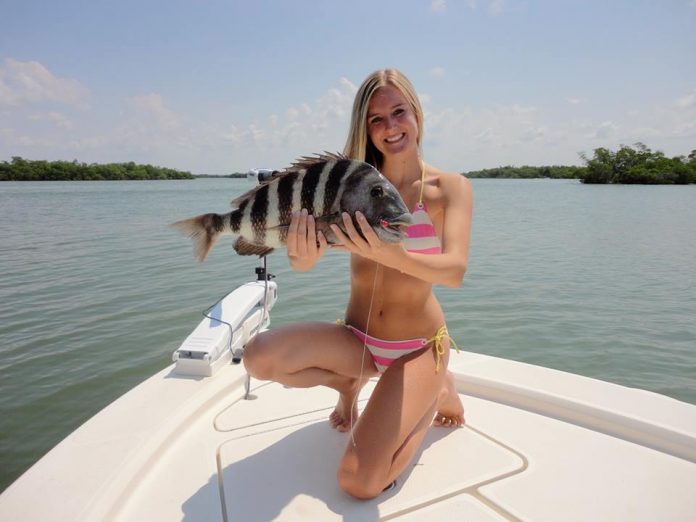 Most saltwater fish become difficult to catch around the winter holiday season, but one seems to practically volunteer itself for duty on the family table. Sheepshead don’t seem to mind the chill at all. In fact, the dead of winter and into early spring is usually the best time to catch them. And this year, there’s a new bait on Tampa Bay that might make the catching considerably easier. Sheepshead love shellfish of all kinds, and the newfound abundance of the Asian green mussel – an exotic invader brought here in the bilge water of international ships – offers a new bait that might make the bait-stealing ‘heads considerably easier to hook. Mike Kim of Tampa, among other anglers, said the meat of the mussel stays on the hook far better than shrimp, and seems to be even more attractive to sheepshead.

“A big green mussel can be cut into three or four baits, and you might catch a couple fish on every strip,” Kim said. “They can’t clip it off like they do with shrimp.” He said the mussels can be found on the pilings of most bridges and piers around Tampa Bay these days. They’re identified by the emerald color around the lip of their shells. Kim and other anglers follow the time-honored tactic of turning on a sheepshead bite, whatever bait they use. They use a spud, hoe or shovel to knock barnacles and mussels off the pilings, creating a chum line that stretches out down current. Sheepshead, which feed mostly by scent, quickly home in on the free food and follow it to the source. Anglers present baits close to the pilings, just off bottom on size 1 or 2 long- shank hooks. Though mussels might make the job easier, fresh-cut shrimp is the most commonly used bait. Use a piece about the size of a man’s thumbnail; larger baits quickly are nipped off. The long-shank hooks are used to prevent the fish from biting through the leader. Sheepshead have sharp, shearing teeth that look much like those of sheep, thus the name. They can bite easily through 30-pound- test mono.

Most anglers put an egg sinker about 12 to 18 inches above the hook, but an even better arrangement is to put the hooks on droppers from a main leader and put a bell sinker on the end. This allows the angler to feel the bite more easily, essential for a quick hook-set. Besides hanging around bridge and dock pilings, sheepshead also gather in rock-edged canals and along rip-rap banks. They also prowl the edges of oyster bars, because oysters and the tiny crabs that live on the bars are on their diet. And on moderate days in winter, they also prowl the same flats where redfish gather, and frequently tail like the reds. Sheepshead on the flats are much more wary than reds, however, and catching one there usually takes getting out of the boat, sneaking into casting range on foot and presenting an unweighted live shrimp very delicately well uptide of the fish.

Dropping even a small shrimp too close instantly flushes them. Sheepshead are not easily caught on artificials, but some expert anglers occasionally catch them on small jigs or flies tied to look like tiny crabs or shrimp. The fish average 1 to 3 pounds in inshore waters. In February and March, larger fish gather on the edges of the ship channel in Tampa Bay, as well as around rocky ledges offshore. Fish to 6 pounds are not uncommon in those spawning aggregations. Sheepshead are known to reach weights of more than 20 pounds, though anything more than 8 is a true trophy. Sheepshead were among the last popular saltwater species to be regulated, but there are now limits on size (12 inches minimum, measured to the center of the tail) and total bag (15 per person per day). There’s no closed season. Sheepshead are among the best eating of all saltwater fish, but cleaning them is no picnic. They have needle-like spines protruding from most of their fins. Some savvy anglers use kitchen shears to cut off the tips of these spines, which makes filleting the fish much safer. The meat is white, flaky and mild. It is delicious baked, fried or broiled.

The Neil Blog: On Fire