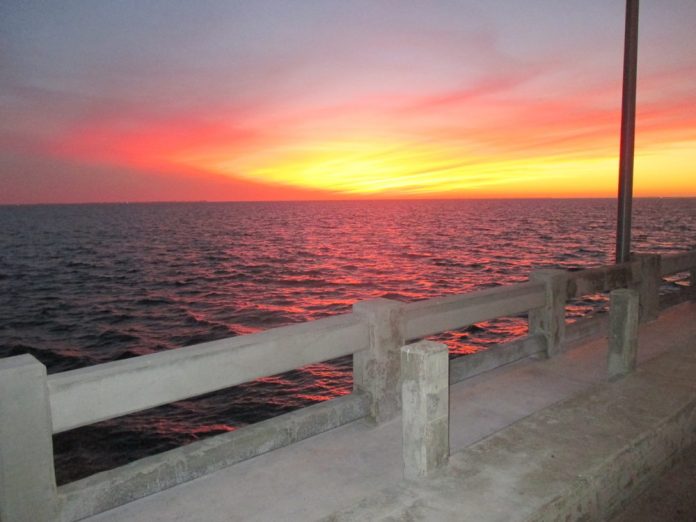 In what many might call one of the finest weeks of weather this year, a variety of both traditional and non-traditional fall species made for fun multi-species angling at the Sunshine Skyway Fishing Piers.  King mackerel started to show strong right near the end of the week, with several nice fish taken just before the publication of this report.  Anglers typically used to a strong Spanish mackerel bite found these fish both spotty and unpredictable.  Mangrove snapper surprised many visitors as they continued on a great late fall bite, with many beautiful keeper mangos caught right in the middle of the day.  Tarpon, sharks and goliath grouper continued to act like it is still summer in the Tampa Bay region, as many monster fish kept anglers on their heals.

King mackerel certainly seemed energized by the warm and wavy action at the mouth of Tampa Bay.  Kings seem to fire-up into feeding mode whenever baitfish are confused by wave action, and this was certainly the case this week.  The end sections of both fishing piers closest to the main shipping channel were the best spots, but the South Pier seemed to edge the North Pier on Kings in recent days.  King mackerel action at the piers in any given spring or fall run almost always starts on the North Pier and eventually migrates to the South Pier.  Many die-hard pier anglers guess that the smaller & often first arriving (schooling) fish most comfortably run the deep water close to the main channel.  This same kingfish crew also believes that the largest (and often latest migrating) kings are very comfortable running mid to shallow water flats more prominent around the South Pier.

As the king mackerel season progresses, the best approach is almost always to set multiple lines at various depths by using a trolley-rod system.  The anchor rod in this system is simply a set rod with a large sinker that holds bottom.  The rod serves no purpose other than offering a steady & sturdy line to which baits and fighting rods can be temporarily attached with release clips.  Release clips are made commercially, but a clothespin attached to a wire shower curtain clip with a short length of line works just fine.  You can set baits out at various distances & depths because the anchor rod can easily accommodate multiple release clips.  Quick-strike rigs with a single mouth hook and trailing treble hook are best for this kingfish system because the minimal pressure of the release clip often offers the perfect amount of pressure to bury at least one hook into the speeding king.

Mangrove snapper remained on a great bite at both piers despite the late point in the fishing season.  Scaled sardines, threadfin herring and shrimp were all solid bait choices for snapper this week.  The daytime bite for mangos this week was exceptional – with both incoming and outgoing tides being fished effectively as anglers used all of these tidal pulls to place their offerings underneath the pier structure itself.  The daytime / underneath-the-pier technique itself is not complicated, but many anglers lack the confidence in fishing directly beneath where they are standing to maintain the approach.  Indeed, the technique itself was pioneered by one of the pier’s most legendary anglers, William Robinson.  Although your author has never seen it done as well as he did, it is deadly even in an imperfect form.  Most fishermen prefer braided lines in the 15 lb. to 30 lb. class when bouncing beneath the piers.  Choose the lightest sinker possible that allows a simple rod lift in the tidal flow to pull the bait even further underneath the pier.  Use fluorocarbon leader material in this game because of the close proximity to pilings and try circle hooks in the 1/0 to 3/0 range so you can simply start reeling without an awkward hook set given the unconventional position of the rod.

Tarpon have very often left the Skyway Piers by mid-November, but plenty of fish remain around the piers, especially in the overnight hours when smaller ladyfish and bluefish schools seem to ignite these silver missiles.  Tarpon can be heard blasting these smaller predators in the overnight hours, and the best offering is to ‘match the hatch’ so to say…  Catch a small bluefish or ladyfish with a Gotcha lure or buck tail jig and then send out the offering on a free-line rig.  If tarpon are feeding aggressively, you will not have to wait long for a strike.  Do not be surprised if a shark or cobia crashes the party because both species will follow the ladyfish & bluefish schools in much the same manner as tarpon.