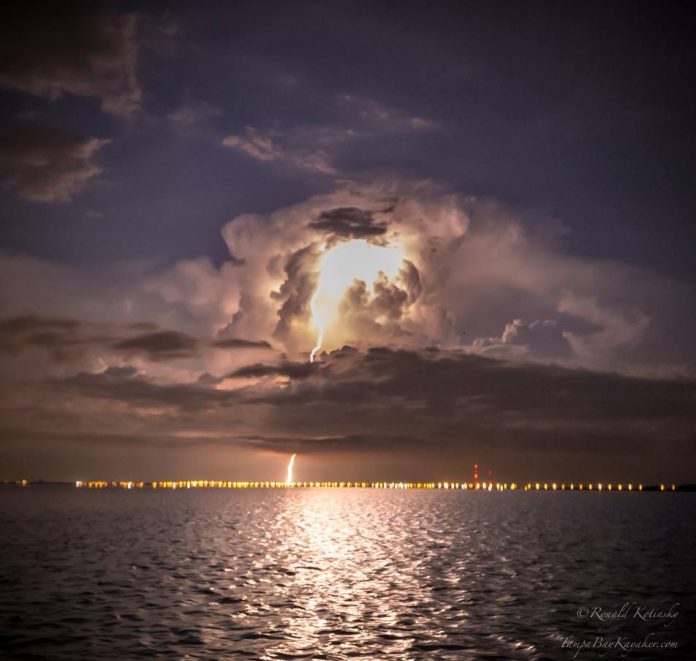 A warm week to begin the summer carried relatively few storms and waters were quite clear at the Sunshine Skyway Fishing Piers.  Spanish mackerel were spotty at times and good at other times – especially the stronger outgoing tides.  Mangrove snapper continued at a great pace, but visitors had to sort through plenty of short fish to take a limit of bigger fish.  Gag grouper were taken in good numbers, with many legal fish coming on incoming tides (and even a few after dark).  Pompano showed good on the approach sections, but many fish were short of the minimum legal length.  Large schools of cownose rays seemed to both fire-up the pompano bite and please visiting shark anglers seeking big baits.  Finally, the blue crab flush is once again kicking into high gear on evening hill tides.

Mackerel anglers had the most success targeting fish early and late in the day this past week.  Midday heat and high sun seemed to frustrate both mackerel and anglers alike, but the lower-light periods provided some action.  Indeed, some mackerel were even taken after dark by anglers in pursuit of mangrove snapper and ladyfish.  Free-lining small live scaled sardines seemed to be the top method.  Smaller sardines sometimes fish better with a Size 1 long shank hook instead of the Size 2/0 hook so often used for larger natural & strip baits at the piers.  The lighter hooks allow smaller baits to swim more freely and thereby survive longer on the hook – a minor presentation tweak that will catch you more fish over time.

Never ignore the incoming tides for big gags was a lesson told once again this past week at the piers.  Free-lining live pigfish and pinfish on heavy monofilament leader through the old span was deadly for gags from 25″ – 31″ in the past few days.  Some anglers instead chose to anchor a live or freshly dead bait by the artificial reefs on the outgoing tides, and a couple of legal fish were taken by this more-relaxing method as well.

A few nice pompano were caught along the approach sections of both piers, but there were not big numbers of these tasty silver fish that met the legal size limit.  Anglers had a fun time fighting fish, but had to let lots of them back into Tampa Bay.  The pompano bite was good on both incoming and outgoing tides, but the strongest portions of either flow were the least productive.  Anglers fishing just prior to a tide change and throughout until after the turn got the most fish.  Pompano swim jigs ranging from 3/8 oz. to 3/4 oz. were the best lures this past week.  Teaser flies were good – either in a loop knot at the jig or on dropper lines.  Pink, chartreuse, yellow, white and orange were the most common colors of jigs, but pink has seemed to be the most productive in recent days.  Anglers fishing just behind schools of rays seemed to catch some of the larger pompano.