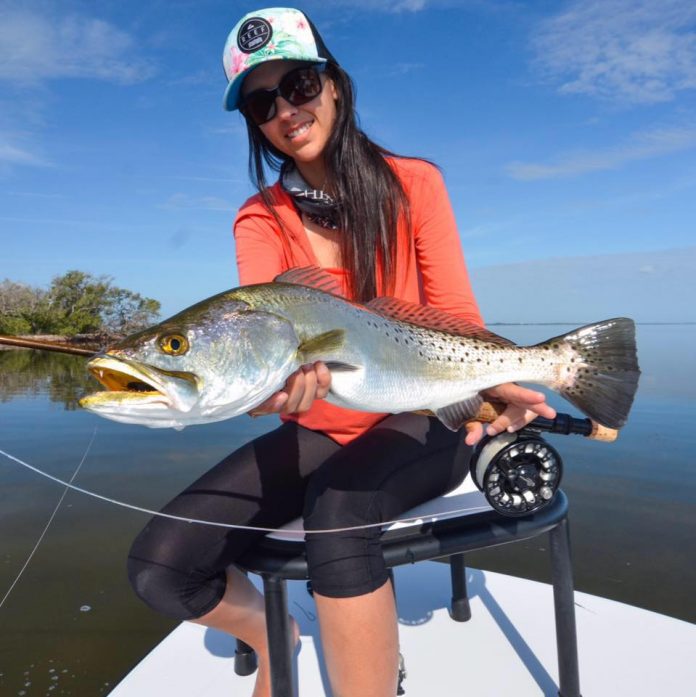 It was not long ago that trout fishing, once the core of inshore fishing throughout Florida, had fallen on hard times in many areas. Not only were decent-sized trout tough to find, but other species with more size, power and glamour – snook and redfish, in particular – were stealing the affections of flats anglers.

But a rapid increase in size and numbers of trout seems to be reversing that trend, at least for a good number of anglers who find snook and reds too temperamental or too smart to catch with any regularity.

The most likely reason for the turnaround? The rules instituted by the Florida Fish and Wildlife Conservation Commission, which cut trout harvest significantly, particularly in the southern half of the state, where only four trout per day can be taken and where all of November and December are closed to harvest.

Now, the fast-maturing trout again seem to be filling in the empty spaces on the grass, and many anglers are finding that 3- to 4-pound fish, once non-existent along the west coast, are daily catches. And even fish of 6 to 7 pounds are showing up here and there – true trophies that can make beautiful wall mounts.

The commission, responding to requests from many guides, will reconsider trout rules this summer and might agree to relax the rules, perhaps eliminating or shortening the closed season. But seeing the result of the management in the past decade, trout fans have to hope they won’t ease up too much, because the fishery is getting better year by year under the current rules.

Keys To Catching Trout
Catching trout in spring is pretty much a matter of knowing the habitat the fish prefer. Find the right bottom cover, the right water color and the right depth, and the trout are there more often than not.

And trout are not usually hard to fool. They eat just about any live bait or lure that will fit into their mouths, though some artificials definitely work better than others.

Trout water is typically 3 to 6 feet deep, with turtle grass or other grass on the bottom. The fish particularly like slightly deeper sand holes in otherwise thick grass. They aren’t in the open on these holes, however, but hide in the grass on the shoulder, and rush out to ambush prey in the hole. You might cast repeatedly into the hole and get nothing, then find a school of 20 fish lying at one end in an area no wider than a king- sized bed.

Trout also sometimes gather on scattered pods of grass where the bottom is predominantly sand. In this case, you throw to the dark spots rather than to the light spots.

Trout also tend to school on the “shoulder” of a flat, where foot-deep water drops off into a channel, particularly if there’s grass along that shoulder at depths of 3 or 4 feet.

The ideal water color is moderately clear, but with a slight greenish murk that allows the bottom to barely show from the surface. Water that’s crystal clear rarely holds trout. And conversely, you’ll rarely catch one in muddy water along our shores, though oddly enough they load up on fish in muddy water from St. Augustine north to beyond the Georgia line.

Larger trout sometimes prowl shallower, particularly in spring when they move into water 1 to 2 feet deep looking for finger mullet. And trout of all sizes sometimes school in run-outs and cuts through bars on the edge of the flats, particularly on strong outgoing tides close to the new and full moons each month.

Plenty Of Good Lures
Any plastic-tailed jig in sizes from one- eighth to one-fourth ounce will catch trout. Bubba, Cotee, Berkley and many other companies make good ones.

But at present, two particular lures stand out: the 3-inch split-tail Tsunami, a molded plastic jig, and the 3-inch DOA shrimp. Both are at least as deadly as live shrimp, and you don’t have to bait up after every cast.

For larger trout, some anglers prefer topwater lures, particularly the 7M and 5M MirrOlure, with a silver belly and a green, black or blue back. The Spittin’ Image is also a deadly topwater. You’ll catch more trout if you use a light mono leader, no more than 20-pound test, rather than the heavier leaders preferred for snook.

Whatever lure you use, flatten the barbs with pliers so releasing unwanted fish is easy. (It took too long to bring the trout back to present levels for us to waste them.) Also, when possible, don’t touch the fish. Use long-nosed pliers or a “fish-flipper” to pop out the hook with the trout still in the water. Nearly all survive when released this way.

The Neil Blog: Into Summer