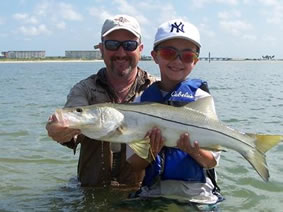 Kayak fishing and also on how I conduct my guide service.   For anyone there is never zero risk regardless of what venue they choose.    Fifteen years now and I’ve never had an injury or significant problem and that is because I have minimized the risks.    One cut, not bad.   One fly fisherman who, on a cast, got the fly stuck in his face.    The only client in all these years to have a run-in with a fishing hook.

Kayak fishing is here to stay.  It is the only way I want to do it.  What do I know?   I have sat in a plastic boat more hours than anyone on Earth in the last 20 years.    A record I will maintain because I still remain busy.

They do not handle the fish on their own.   Rigging and other activities are things that I do that I will not allow the client to do.    But fingers around hooks and sharp tooth critters, that’s all me.    I have certain clients who have skills to do it but there are certain fish they will never touch either.    I also do not use lures with treble hooks so a very good reason.    I’m right there with them and I handle all of that systematically.

For when you go on your own, I have you watch how I do it.   In every way:  If you do it the way I do things, it will go better for you.    That’s in the safety.  The fishing.   And in being efficient.

The person getting into it, a first purchase should be pliers.   They don’t even have to be good pliers.   Pliers keeps your hands away from teeth and hooks.    One of the biggest risks:  Pompano fishing.    Two hooks on a pompano rig, if you don’t do it right, the second hook will be stuck in hands very easily.   Spending a little more money in all equipment is an investment in durability.    Cheap pliers, throw them out when they rust and get another one or spend the money and get pliers that don’t rust.   I am very good with my hands and use pliers a lot less than others.

Physical conditioning is a non-factor.   It doesn’t take extraordinary power or conditioning to move a kayak through the water.   I have certain potential clients with physical limitations that I will send to a guide who has a boat.   Should the need ever arise, I have a tow rope to clip them off to me and I’ll get them back to the launch.  Technique:  Dip the paddle in.   Stroke easily.   Lift it out.  Drop the other paddle blade in, stroke.   Repeat.   If you are wearing out from paddling, you’re doing it wrong.

A squall comes up and we sit it out at a pre-determined Safe Spot.   No, we can’t get up and run at a speed to outrun a storm but I will add that I’ve seen the power boat people hammered for trying.  Engine stalls and they’re caught in open water while we’re sitting safely on a low spot, kayaks and gear secured until the storm passes.   Safe spots are a theme.   Getting back to the launch is always a best option but when that is not safely possible, utilize the safe spots.

Fishing kayaks are made with a wider center beam which makes stability way better than kayaks of a decade ago allowing for easily getting in and out of them.   They are never allowed to exit the boat without checking with me.   That also applies to standing in my boats.   They will never be allowed to get out in areas with oysters or where it is deep muddy bottom.     They must wear appropriate footwear.    My boats, with the design, won’t flip.   They can however, fill with water.   My morning coffee cup is a bailing device.    Heavy rain or high waves from wind.    You get enough water in a boat, the goal is to get to the shallows to exit the boat.   Use gravity.   Lean on the stern or bow, all the water collects on that end and you bail it dry.   Simple.

Multiple clients must stay a safe distance from one another.  A problem I’ve heard so many people in boats talk about regularly is “my buddy hooked me with a lure on the backcast.”   Never going to happen out there with me.

Idiot power boaters running us over?  Maybe if they had an air boat.    I minimize time that can be spent in trafficked areas and literally, most of the power boats have to be on trolling motor where I have people fishing a majority of the time.   The only realistic danger is the sailboat folks.    They don’t make much noise on the move and (not all of them) a lot of them don’t have great control over where they’re going and seem kind of oblivious to what’s in front of them.  I believe the kayaks are easily visible and having a powerboat run you over just isn’t going to happen.    The biggest danger:  Sailboats.    The only time I have been run over was by a sailboat.    The big mast, people who are in a world of their own.  If you are in a heavily trafficked sailboat area, keep your whistle around your neck and grow eyes in the back of your head.

I take great care with decisions and I’ll postpone some trips that you may still take someone out.   That’s my err on the side of caution.      Sometimes it turns out to be the wrong decision which is all right.   I’ll still be taking them on another day.   Sitting safely on an island is better than drowning.    Already mentioned once:   Have “safe spots” predetermined for every place you go.   I want it to be an enjoyable experience anyway but for sure:  I don’t want it to be perilous.

Even with success, a kayak guide isn’t getting rich.     He might be doing well, but he isn’t getting rich.   If you can stay busy enough, you can make a very good living at it.    Not many people are going to be able to build it up as well as I have.    It would be better for a “second job” for most people.

Why does a guide who is in a powerboat have to have a license but those who are in a paddle fishery do not?  The paddle folks claim they are more efficient in catching/harvesting.  Good question.   I believe there should be some kind of structure.    License is fine.    But CPR and first aid training mandatory.    Insurance, mandatory.   My insurance is $800 a year.    It protects against acts of God but mostly, insures my equipment.

As a kayak guide, I’ll add this.    Most of my clients are catch and release but I am not opposed to people keeping any legal fish that, as a licensed angler, they are entitled to take.        I believe there are some kayak anglers who keep everything that’s legal.     Most of my clients are more interested in the sport, so it’s hardly the massacre out there.    The clients pay for their license.    No license exists that cover my clients.   If there was, I would get it.     The clients are great, with most of the state residents usually already having their fishing license anyway but the out of state folks happily get the license they are required to have to go on a kayak charter with me.   Florida licenses are not expensive.

I’d get the captains license if it was required.   But why exactly would you be a captain if people are “their own captain”.   In their own boats it is not a “vessel for hire” situation.

What I have a problem with:   I am an insured guide running a legitimate business, sponsored by great companies and gladly pay my taxes on my income.    The others doing the same thing often seem to come and go.   They don’t usually have any first aid and/or CPR training, or any liability insurance of any kind.     It is ripe for regulation because I have seen many situations where these “guides” are putting their paying customers in peril.        Sure, that makes them personally liable but for the consumer should something happen “what’s 100% of nothing?? “.

I don’t lump all people into any one category.   So, I’ll defend my own “choices” in this case as well.    It is not simple to make a living as a guide.        What is legal for someone to do in many facets of life doesn’t necessarily mean it’s right.   I work hard for what I get in the entertainment industry of being a fishing guide.

I’ll do what is legally required, of course, but right now I’m doing things that are not required but I believe should be.   There doesn’t seem to be any movement toward rule changes.

Want to get into it yourself?   Do you really want to ruin your hobby?    Make your money doing something else.   Keep kayak fishing as your hobby.    I’m busy so I fight the “feelings.”   Wishing it was over so I can go home.   As much as I like being out there, you get to where you want people to catch their fish, the trip to end, finish the work of loading up and be on the way home.    Stay the guy that wants to be out there.

Captain Mel was interested in how I was doing it.   He helped me a great deal in promotion of the business.    He liked doing it himself.    Mel was not a strong paddler.    I took Mel often.    In his own kayak, he was still a passenger.    I towed him around.     Frank Sargeant and Terry Tomalin were also supporters.   Frank is still doing it but Terry died at an early age unfortunately.   He was my editor at the Times.    He was a friend.

To investigate further:  Use this site’s search feature on topics you want to learn more about.    I didn’t attach links to this one.    The search feature works great and all other topics are covered and can be researched on here.

The Secrets of Lures… Finally Revealed