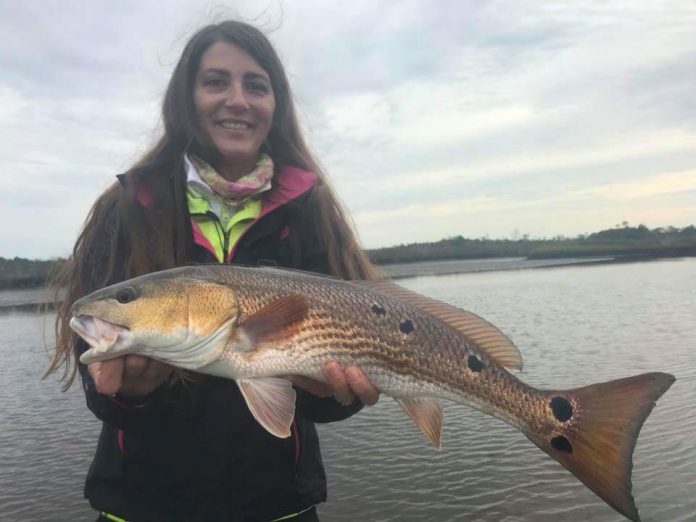 So typical for spring: The winds are usually blowing. But anyone getting out there anyway has seen that the longer days have caused several things to occur: Water temperatures have risen significantly. Hand-in-hand with that, pelicans can be seen diving on massive schools of bait in various areas around Tampa Bay. Subsequently the fish seem poised to make a charge out onto the flats once they decide that it’s time to leave the backwaters.
With that arrival of bait, we encountered mackerel the last week. They’d been available most of this mild winter with a maintained food supply of bait that didn’t move out of the Bay, but now that the invasion of inshore bait schools is underway the mackerel are here in decent numbers and by mid-month there should be a huge spanish mackerel run.

Several weeks ago the redfish opportunities seemed to improve in both quantities of fish caught and the size of the fish caught. Some of the schools located were downwind of islands and at creek mouths which also seemed to be out of the wind. Some fed readily and some were frustratingly stubborn.
The schools of whiting weren’t in their normal spots for the first time in months, also a signal of changes that are ahead.

Silver trout are still available. They’re great fun on light tackle and will hit just about anything you get down and bump up and down off the bottom once you locate them.
Speckled trout are still a great inshore target.

Sunday, after hearing reports of black drum schools in N. Pinellas County from several sources, I set out in the wind to see if any were in spots I’d found them in “springs past.” Others had seen them on grassflats and didn’t determine which species of drum they were right away. A quick hookup and a double over rod was instant evidence that there are substantial numbers of drum in the area. These larger drum are prone to having a lot of parasitic worms in them and the food quality is low. The were great fun on medium-heavy spinning tackle.
It’s a busy week ahead and I hope that everyone else is enjoying the fishing despite stubborn winds!
Back to fishing every day, reports will be on time again.

Kayak Fishing Skool continues! The next two months cover tournament species: Redfish and trout. The host site is the 8th Avenue Pub in Safety Harbor. Start time is 6PM. A raffle at the end of the session is still intact. This month: On the 22nd.