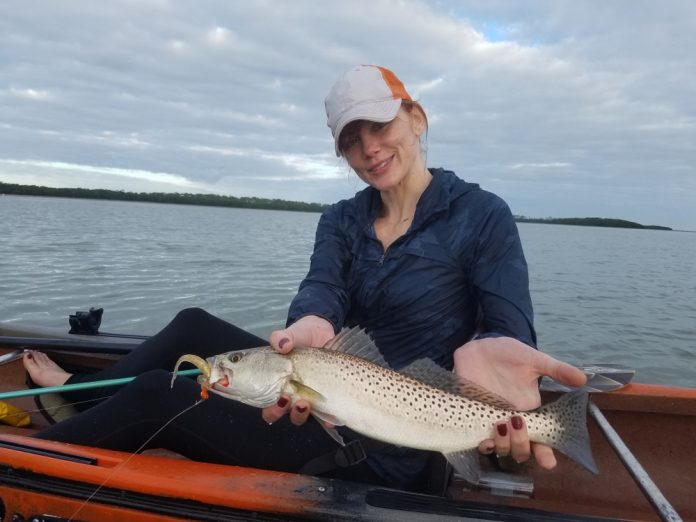 Is the water cold?

That is something that remains debatable to local anglers. We all have different tolerances to the cold. I personally haven’t had any problem getting out of the kayak and into the water and wading in shorts, even when the winds have been steady. With air temperatures into the low 80s a lot of the last week, things are still very “spring like” in west central Florida.  The last front brought the water temperature down, but not to any kind of critical level.

No doubt the waters are cool enough to have the trout behaving like trout normally do in January. They predictably have gone into normal wintertime feeding patterns. Trout to 25 inches were common this week, most caught on the 12 Fathom SlamR and on the Buzz Tail shad.  Trout must be 15 to 20 inches, limit four:  One of the four can be over 20 inches.  Neil’s tip:   Don’t keep trout until they are 16 inches and let them all go over 20 inches.

“That time of year”, the whiting were impressive, in the medium to very large category. They’re excellent eating no matter how you prepare them.   Use the Silly Willy/Uncle Neil teaser for success.  That’s your same recipe for silver trout.

Sheepshead are easy if you don’t mind baiting a hook.  I don’t do this very often but if I was going to it would be right now.  Silver trout, in but not in record numbers.  Red tide has impacted this years arrival.   Red tide?  Dismal around the northern opening of Tampa Bay.  The bloom has persisted coming up on ten months now.   It is killing fish near Fort Desoto and most of the fish “moved.”     My advice, stay away from that area for a while.

I’m anticipating the New Moon phase and the bump up to more impressive tides to lead to some great fishing the rest of this week!  John Veil returns with his crew and should have great trips.

Kayak Fishing Skool resumes this month (Jan. 26th).    The January topic is “Topwater Lures”.  The raffle at the end of the sessions will continue in 2017.  Bill Jackson’s will remain my hosting location for my monthly seminars and if you have not been into the store lately: Get in there.   Everything you need you can get it here.

Don’t forget, the Captain Mel Classic is just over three months away!   The event is April 29 and registration will open soon.

As usual, be careful out there!

For next few months, trout is a great target