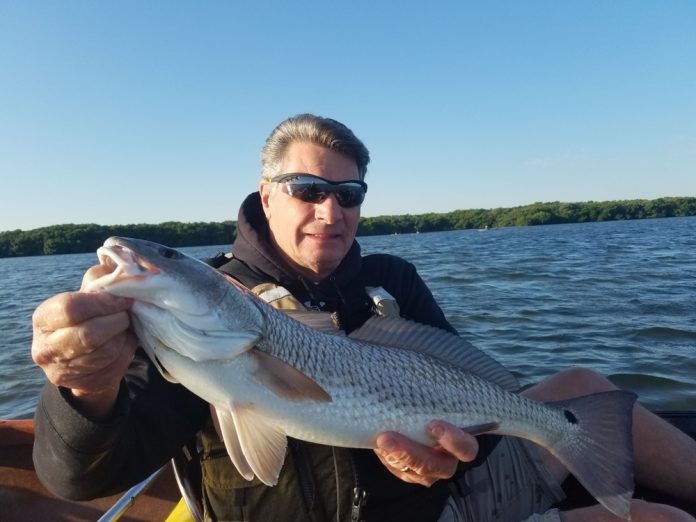 For those who do get out to do some fishing: Hand-numbing temperatures, eye watering winds and much colder water make these next few months of the year less appealing than the more temperate Fall weather that just passed us by. But those who decide to not go at all really can miss out on some great angling opportunities.

Redfish remain a good target for the inshore flats anglers. Small jigs and spoons worked slowly produced redfish. At times of extreme low tides, the redfish were found in the deepest holes trapped by the other areas that were high-and-dry. The areas that seemed to do the best were those deep holes that were sheltered from the winds.  Redfish have been tougher to predict than years past but if you know where to go you can have very good redfish outings.

On a recent scouting trip, I had a mid level rising tide and I was exploring an area I’d been to many times before. I glided through the area and kept my eyes focused on the water. As I passed a small creek mouth I thought to myself “there’s a new tree branch laying in the water” but as I kept my eyes fixed on the log, I realized that that it was moving ever so slightly. An opportunity! I let myself glide on past the area then turned the kayak around to face that creek. I grabbed the rod with the 5″ plastic tail rigged weightless and weedless and I skipped a cast into that tree line. At the time I clicked the bail shut the fish had already lunged at the lure. In a great explosion of water the snook tried to go up the creek, then into the shoreline, then made two crazy jumps as it headed for open waters. A quick measurement without taking the fish out of the water put the fish at 37 to 38 inches.   Great to see, had they been left closed we would have tens of thousands more of them available.

The spotted sea trout are into their wintertime mode of aggressive feeding. Large numbers of “dink” trout are being caught on the flats and are evidence that given more time and continued reproduction, that fishery will build up again. The larger trout have also been caught on recent trips inside Tampa Bay and up the N. Pinellas coast.  As time goes on, the larger trout will prevail and become easy to catch.

I returned home last evening from my 8th trip to Tampa this year to fish with guide Neil Taylor of Strike Three Kayak Fishing. With the four days fished this trip, I spent a total of 30 days fishing with him in 2016 over eight different visits. On this trip I was joined by three other retired friends who are avid kayak anglers (Mark, John Rentch, and Terry).
This type of kayak fishing is pretty basic — you are alone in a 14′ plastic boat with a paddle, anchor, one fishing rod, and few spare lures. Neil leads us around to different spots and tells us where to cast. We fished in three different locations but focused on casting small soft plastic lures to shallow water, often grass flats or sand patches. Wind each day and low water on one day made the fishing challenging at times. Nevertheless we caught 13 different species during the trip (speckled trout, redfish, snook, ladyfish, flounder, bluefish, jack, pompano, pufferfish, pinfish, lizardfish, spanish mackerel, and needlefish).
I had hoped to get a flats slam (redfish, snook, and speckled trout in the same day) on at least one of the days. I did not accomplish that goal for any of the days, but I was able to accumulate all three species during the trip. My redfish came on the final day. I drifted around a grass flat covered by 6″-12″ of water and made over 200 casts. Out of all that effort, I had one bite and landed an 18″ redfish.
John caught two large flounder on the first day. Terry caught several flounder and the largest redfish of the trip (25″). Mark was quiet until the last day when he caught fish after fish, including several large pompano, bluefish, trout, and a few other species.
In addition to the fishing, we had fun getting away to warm, shirt-sleeve weather. The Florida wildlife scenery was great too, with dolphins and manatees showing up. John had a manatee surface next to his kayak and show its snout. The bird life is always spectacular. We saw brown pelicans, white pelicans, herons, egrets, ibises, roseate spoonbills, ospreys, cormorants, various types of seagulls, frigatebird, and wood stork.
It was tough to return to cool and damp weather. I am already planning my next trip.

That was John’s thoughts on their trip.   The final day I got them on that “extra action” which was topped off by the hard fighting bluefish.    They had action, but not the action that kicked in right after they left.   The fishing is on fire now.   As I say, “Stupid happy fish.”   I took Eric out and we spent two hours targeting really big fish.   He got a couple.   When I moved him to put him on action he caught fish every cast for almost three hours.   It steadied out where the last hour he caught fish every other cast.    The day after that, a short trip:   Sharks, bluefish, pompano, trout, flounder.    Under three hours, pretty much just mayhem.   Bluefish around five pounds, they are fun to catch.    Translates to about ten pounds of fish spread.   I kill every one I catch.   Maybe I’m wrong.  I treat bluefish like an invasive species.   They are like stripers back home in Arizona.  They eat everything.    I doubt I am having a huge impact on their numbers but still, every one I remove I feel like I’m saving more of the other fish we have.