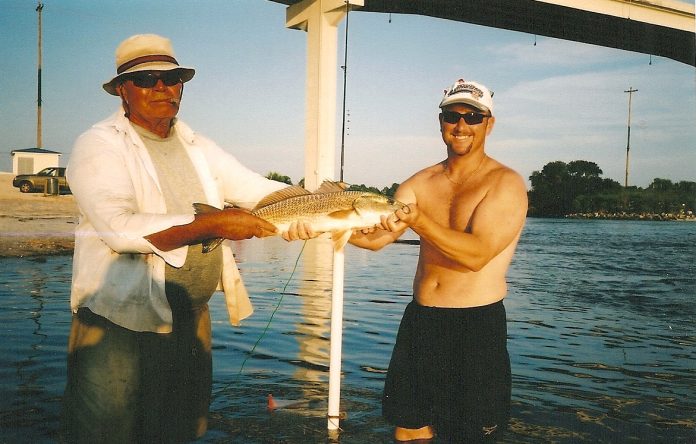 March has come and gone and one thing that did not happen that happened every other March in the past: We did not hook any cobia this year. The weather may have affected that but I am sure that they have been around. Perhaps the month for cobia action will be April this year. The mackerel have made their way in and are now a solid target around the Skyway area.

Water temperatures have risen. Baitfish schools will invade the inshore flats anytime now. One thing is certain: the fish are coming out of their wintertime sluggishness and the fishing this spring will be fantastic. Redfish have been found in schools of 200 to 400 fish, traveling almost like mullet schools. Speckled trout action has been first-rate, with fat, hard-fighting trout caught on every trip, some going over the 30-inch mark.
Black drum are being caught around the region in a lot of the same flats they are found in years past. Resembling tarpon fishing at “The Pass” the number of boats chasing the drum schools is almost comical. But you don’t have to fight the crowds for the Big Uglies. Find your own school of them (and keep it to yourself). There are many of these drum schools and if you travel the area and look around, they’re not exactly “difficult to spot.” A concentration of drum is going to usually be marked by extra muddied up water. With an average weight of somewhere in the 60 to 70 pounds they are a good opponent.

Don’t neglect flounder as a target in the region. 2017 was weak. This year they should be back in strong.
Speckled trout: Great action on trout between 16 to 24-inches. The lure of choice has been the 12 Fathom 5 and 6 inch SlamR’s by 12 Fathom. Kayak anglers are enjoying some of the best results, catching huge trout in areas a lot of power boats aren’t going. In the shallows, it isn’t the constant nonstop action one experiences in some of the deeper locations but when they are found, they’re fat hard fighting fish.

Redfish are going to be a top story for the months to come. The feeding really accelerated the past week and at the higher tides, massive schools are patrolling dozens of shorelines around the Tampa Bay area. “Cruising” redfish are sometimes tougher to trick on the lures but the same 3-inch mullet tail caught dozens of redfish last week.

Dust off the gear and get out there! If kayak fishing is something you haven’t tried, the trips are instructional and all the boats and equipment are supplied. Native watercraft, St Croix rods with Daiwa reels rigged up with the 12 Fathom lures are what you will use! Whatever you fancy, don’t wait any longer: It’s time to get in on the fun!

The trout still like the 12 Fathom SlamR. The Redfish have shifted to being more interested in the gold Mullets, “redfish” Mullet or Mirrodines. They are getting more aggressive with the arriving baitfish schools. April should be the easiest month of the year to catch a redfish. It should make for interesting trips because trout action should hit peak anytime now as well. The perfect mix of water to air temperature, the opportunities should become outstanding for most of the month of April.

April 26 is Kayak Fishing Skool! The topic is: Speckled Trout. The host site is the 8th Avenue Pub in Safety Harbor. Trout are one of the tournament species. The Captain Mel Classic is on May 12.
There are openings in the schedule and I would be happy to get your outing scheduled!
As always: Be careful out there!