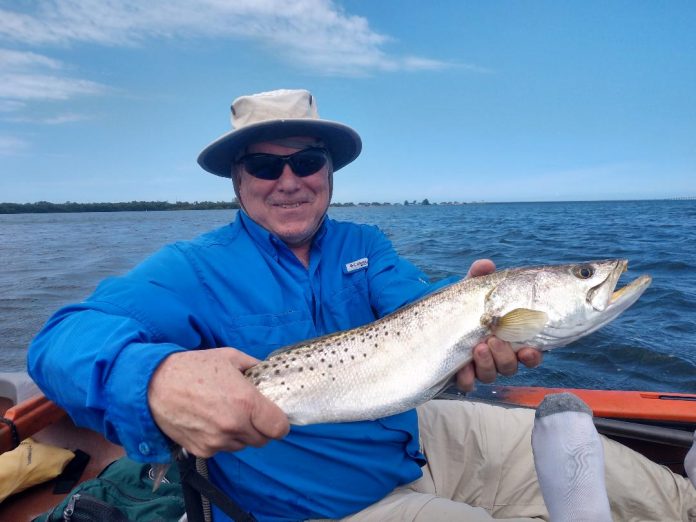 May is a fantastic month for fishing west Central Florida coastal waters.  As April wears out and May arrives, things will get even better with everything-lasting until “summer settles in.”   High winds with cold fronts and other pressure gradients has murked up local waters over and over again.    Some days have been fantastic fishing results, other days have been tough.

But fishing can be hit-or-miss even in the very best months.   Several times during the last week and a half, one day would have outstanding fishing and the next day with the same conditions things were kind of flat.   No question:   Ladyfish are easy and people like catching them.    Trout are right behind them.    We routinely caught 50 trout on a single anchoring.    Two weeks ago they were bigger.    That always shifts back and forth.     One attempt off Joe Island:   Not good.   The previous time out the guy caught nothing but big trout.    Closed down for construction, that launch is tougher to access right now and the guys working there told me it will be going on “for a year and a half.”

I moved trips around to a lot of locations around the region.   Action was average in some places and pretty good in others.  One particular location remains “off” overall but there are still a few good fish to be caught there too.   The arrival of baitfish on the flats is the missing ingredient to some of the best action of the year.   This could happen at any time now and will be a great time to build a lot of confidence in using lures to catch the species we have here.   Redfish and snook remain troublesome.   My efforts there continue.

The lures?   12 Fathom soft plastic baits and Mirrolure topwater lures.   Two companies that made large donations to the Classic for the ninth straight year:  Buy their products and use them because they have engineered great lures for successfully fishing.

Flounder:  An option again.   Pompano:  Just not there yet.   You go to the right location, you can get them but they are not in their summertime spots yet.    Flounder are better but they could load up somewhat better.     Silver trout and whiting were a strikeout this year:  Probably because of the Red Tide issues off our coast.

If you want to get on the schedule, shout out loud.   Lots of dates are taken but good openings are available if you want to improve your skills.    I can give you a primer before the Classic.   Be a winner!

The month of the Captain Mel Classic:  The ninth annual event will be a great success with many fun stories and a whole lot of great things for the community.   Charity money continues to grow from generous Classic winners asking to have their winnings go to The Suncoast Animal League.    The setup for the Classic is the same as years past but with just more from all of the sponsors, new sponsor donations which just meant a little more time organizing the products for prizes and the huge raffle.

You will be able to see the results at capmel.com on The Captain Mel Classic tab on the home page.   The stories and sponsor article are forthcoming!

Be careful out there!

Time flies.   From a long time ago.   Mark’s oldest:  Now a mother herself.

The very next day I got word that Jay Brewington died after his own struggle with cancer.   Jay and his good friend John started a kayak fishing website and internet forum.   Jay and I were acquaintances for years, mostly talking about baseball.   In the past year he became more of a friend as well and I am pleased that I got to spend a lot of time with Jay at a gathering where we talked at length about so many things.   As with my brother Mark, Jay was very intelligent, funny and enjoyed people.   I attended the services for Jay to pay my respects to this man and show the respect for someone we admired and will miss seeing around the paddle fishing community.

Do you have the new books??    “Kayak Fishing” is completely instructional.    “Fishing Tampa Bay” is very helpful to those who are going to try it out around here.    $15 or both for $25.     A slight fee for postage and we can have them right out to you.