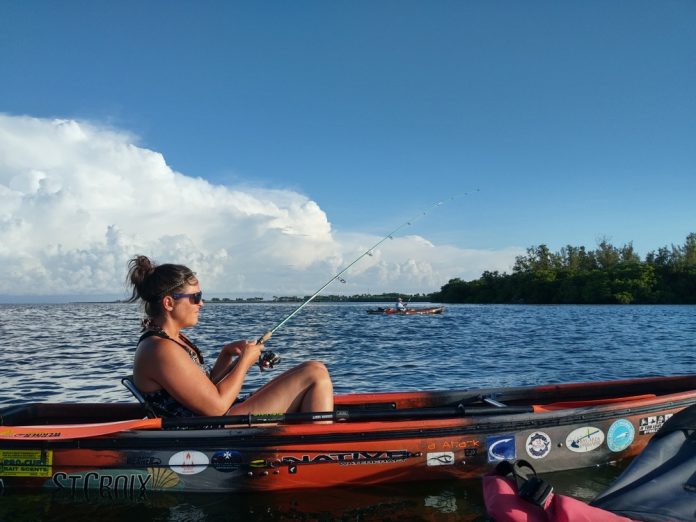 I am done with the busy season.   No doubt about it.   More days sitting in the air conditioning?  I’m not bad with that.     I’m looking forward to the changes Fall will bring.   The bottom line:   It’s a shame more people don’t want to go right now.   It is ON FIRE.

Two words:  Pompano dinners.    Out of the normal routine, the kayak fishing for pompano has been excellent in the past two weeks.   Their arrival, pretty much right on schedule, the Silly Willy with a teaser setup has connected on three species every single outing:  The desired pompano; the coveted cobia and the dreaded drum.    OK, so it is not the end of the world to have the rod bent by big ugly drum but they are big enough where you will lose some tackle if you cannot move them off the bottom and away from the pilings.    A glut of 20 to 40-pound drum, one fish was caught that was pushing 80-pounds.

The pompano have been a decent size.   Bigger last year, there are more of them this year.    Yesterday, 20 pompano in 45 minutes.    Dinner for ten.   They are probably one of my most favorite of all species to target, evidenced in this article on POMPANO from last week.      The cobia have been about “two a day” by-catch while targeting the pompano.   Average size has been about 35 inches but some much larger cobia have been hooked.    Location, location, location:  The cobia are usually hooked when the Silly Willy-Teaser, areas of water nine feet or deeper.

Pompano trips have dominated.    We have done some other stuff but usually after pompano fishing.    As I have said “Thank God for pompano.”   They are not only one of the most fun fish to catch, they are very good to eat.   I am pleased with the condition of pompano in Tampa Bay right now.

Redfish catches have accelerated predictably after an unusually slow spring and early summer pattern.   Catches have been much better.   Same goes with speckled trout which, same as years past,  were easy targets with topwater lures in about two feet of water.   They went offshore or to the beach troughs for much of June but they have returned to the flats.   A great July and August “game plan” would be to hit trout and redfish at sunrise and then go do the pompano game later in the day.

Snook?   The condition of this species is still dreadful in this region but with signs of growth.    The FWC commission decided on their own to reopen snook to harvest, on the support and recommendations of the FWRI (research institute).   I have not taken a snook trip since 2009.    Educate yourself.   And respond.  The species is making progress but keeping them off the harvest list: The fish that would be taken are about to become breeder stock for the rest of their life cycle.  What a pity.  More protection and we would have 400% more big females.   Shortsighted.    Erroneous.

“Madmarco Lavalle had a six month hiatus from kayak fishing. He needed to go badly. We met before sunrise and went through that same area I’d taken JP and Eric. There wasn’t the surface activity as there was the day before but there was action. Marco caught fish on every cast for about 20 minutes. It was mostly seabass and juvenile gag grouper. We moved around looking for other action and then ultimately went “floundering” in a Pass that can sometimes hold some nice flounder. No flounder were caught but we had two cobia hookups. One that was caught that wasn’t more than 22 inches. The second fish was probably around 33 to 35 inches but that fish got off. It was good time on the water for Marco, and I’m sure it won’t be six months before he goes again.”
Marco died about a year and a half ago.    He was one of a kind.   He loved fishing.