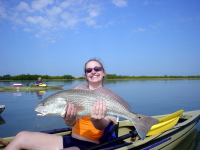 An impending environmental disaster. Piney Point. The phosphate industry strikes again. They were pivotal in a past huge Red Tide. Now, a direct spill into Tampa Bay could happen at any time. How is this possible?

The fault lies at the feet of your state legislature. At the feet of those who bend to the will of the “Chamber of Commerce”.

The transition to spring is complete. Stepping into the water over the weekend, it had that old familiar “warmth” to it long before the sun had even gotten very high in the sky. Recent fronts and high winds had kept things on hold as far as fish finishing their travels back out to their summertime haunts. Not anymore. Things are definitely in the warm weather pattern. Large glass minnows have arrived inshore and the scaled sardines will be found on the shallower grassflats in increasing numbers in the days to come.

Other days had more typical spring conditions and better fishing.    So much is good.   Some things are not.   Discussed below, not everything is great and does the FWC even know about it?

The past few days have had phenomenal fishing.   Continuing a trend that started about a year ago.    The gaps:  What happened to silver trout??   Redfish and snook, not good.   The rest, in pretty good shape.    We, as humans, need to find ways to bring it back to the way it was.   A sustained resource.   Good fishing.

Redfish continue to struggle. The smaller ones have been available in various areas: Against the trees, in swashes and around the oyster bars. The larger ones have been more likely to be patrolling the foot and a half deep grassflats in search of a meal. There are some, but it isn’t what it used to be.

On a personal trip this week, I pulled out the rod with a 3″ mullet tail with a 1/8 ounce jig head and got 3 trout in 3 casts all 18″ or above. What was amazing about it was each time a fish was hooked there were one or more other trout following the hooked fish and trying steal the lure away from the hooked fish. I’ve seen that occasionally but never three times in a row!   Trout are in great shape.   Surprised they haven’t gotten bigger with the closure.   There are still a lot of baby trout, evidence of how often they spawn.     Topwater lures have also worked.   It is “that time of year” when topwater is going to work the best for the entire year.

High winds with cold fronts and other pressure gradients has murked up local waters over and over again.    Some days have been fantastic fishing results, other days have been tough.   For several weeks, redfish stacked up in the same areas on afternoon high tides.    Large schools of bait had moved in to those waters and finding the redfish was as simple as finding the baitfish.   Wind is proof that God doesn’t want us to be happy.

The arrival of baitfish on the flats is the missing ingredient to some of the best action of the year.   This could happen at any time now and will be a great time to build a lot of confidence in using lures to catch the species we have here, particularly redfish.

The wind continues to blow.    It has been blowing since November.   As I say, “It may never stop.”    It is one of those things you just have to deal with.   The fish don’t care.  They will eat whether the wind is blowing or not.   A shoulder injury from 1988, in December, those muscles went bad again.   The decision once the busy season is over:  Do I have something done about this shoulder.   I still say I retore those muscles paddling in that November and early December wind.

But fishing can be hit-or-miss even in the very best months.   Several times during the last week and a half, one day would have outstanding fishing and the next day with the same conditions things were kind of flat.

Be careful out there!

Poachers are common thieves.    See a poacher, report a poacher!  If you suspect a wildlife or boating law violation, report it to the FWC’s Wildlife Alert Reward Program: 888-404-FWCC (3922).  Cell phone users can reach us at *FWC or #FWC, depending on your service provider.  Most cell phones allow users to send text messages directly to an email address. You can text Tip@MyFWC.com ; standard usage fees may apply.