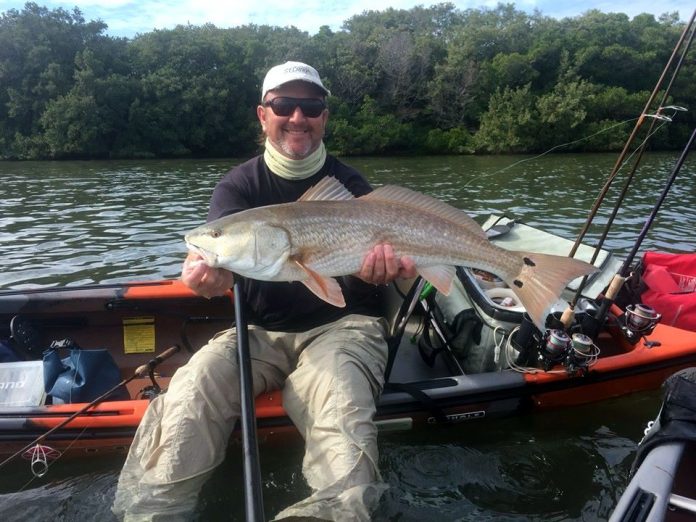 For those who didn’t get to hear the radio show but would like to hear it, you can get it off his site archives:  http://www.capmel.com/melshow_archives.htm    As is always the case, I enjoyed being a show guest.  Great questions from the callers and some really great emails from Mel’s listeners.    On to the report:

Spring can be tough with “second guessing”.   Wally, on his second trip with me, started out the rod bending quickly: He caught his first redfish (on his second cast of the day) on the 12 Fathom SlamR!   He got a second one almost immediately thereafter and I said “let’s go for the snook.”  (He caught a beautiful trout.)  He went “snookless” with one hookup with the snook throwing the hook on the jump.    The second guessing?  I definitely wish I’d kept him on redfish longer.    It was a Saturday and lots of challenges.   People swimming in the snook hole, people doing “cannon balls” off of sailboats where I wanted to fish, power boats on motor in exclusion zones, touring kayaks paddling across his line.  Saturday fishing in April!!

Wally K of Clearwater booked a trip to learn how to catch fish from the kayak.    It was a “mission accomplished” situation.   We not only enjoyed nice weather, Wally did very well tricking fish with the 12 Fathom lures, a lure that he developed a lot of confidence using.  I’m looking forward to hearing back from Wally about his subsequent fishing trips.

Jason H got me out of my home waters to fish Ft Desoto.   A short paddle to the first location: Jason’s first redfish!  Caught on the 12 Fathom clear gold mullet.   We spooked out some good concentrations of 35+ inch reds.   With the instruction Jason got from the trip, this is someone who will be getting back to me with tremendous reports in the future.

I took my long time friend Chris Guess and his two boys out in the kayaks.  The five year old hooked up first.  Nick lost the fish near the boat and broke down into tears.  I know the feeling, but I guess I am able to hold back the crying until no one’s around.   His father, trying to put some closure to it for Nick, asked me:  “Does that ever happen to you?”

“Just about every day!”  He was hooked up again four or five more times after that.   They caught a lot of redfish and all were 24″ to 32″.   7 year old Andrew hooked a snook that went berserk and got off the line. He turned to me and said “That wasn’t a redfish was it?”   So Andrew was able to tell the difference.   Both of the boys (and their father) listened to the directions on fighting a fish and did very well with managing above average size redfish.  It’s interesting to see who has the best innate abilities.  Nick, five years old (six on May 1st) fought the fish up to boatside in half the time it took his Dad or brother.   Chris caught this 32 inch redfish that put his skills to the test:

They are nice kids.  And Chris had a great time.  Lots of time talking about birds, baitfish, dolphin, other kinds of fish.   There is no doubt, when you have a 5 and a 7 year old along, you’re going to be answering a lot of questions.    They listen and absorb. Later that evening, I heard them reciting some of the same info I’d told them hours before.

Next week:  Big catches of redfish. The onslaught of spring snook!  Mike F catches redfish after redfish while the live bait guide next to us catches nothing.  John, Sean and Jeff’s first kayak fishing experience.