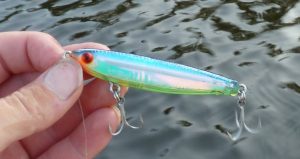 Sixteen color choices, I have caught fish on every color Mirrominnow I have used.   Some of the biggest fish I have ever caught were on this lure.

Rig the Mirrominnow on a fluorocarbon leader.  Keep the leader line light, 20-pound and under.  I just don’t like it as well if I get up to leader line that is 30-pound.

Safety tip for all treble hook lures:   Use a pliers and crush all the barbs down.    If you do not eventually you are going to have a negative experience with a treble hook.   For many people this will result in a trip to the hospital.  To me, completely unnecessary.      Crushing the barbs not only makes it possible to resolve this kind of situation on your own, it makes removal of a hook from a fish much easier as well.    The other side benefit for me:  I get hooks in my shirt.   With the barbs crushed down, I can get the hook out of clothing easily enough where I don’t have to take off that article of clothing and I don’t have to ruin the shirt or pants by having to cut into it. 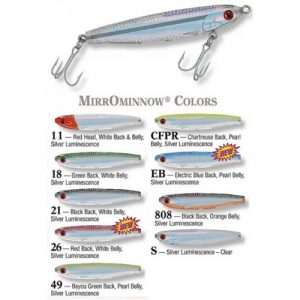 ” I’ve fished under docklights for seatrout all my life and never have I had as much fun as with the Mirrominnow. The holographic flash makes it irresistable to seatrout when used with a slow twitch-twitch retrieve. I’ve also caught red on the flats with it by fishing it just underneath the surface in shallow water. Its a little expensive, but its worth the cost. ”

“Suspends lower with slower retrieves and pausing. Will function well at the surface wither quicker twitches. Used it the other day and caught a mixed bag of ladies, jacks, flounder and reds. The chartreuse color also works well for trout. Because of the versatility in the water column I found it very useful around oyster bars and skinny water. ”

“I wonder why, but this lure really catches fishes like no other, i have found mirrolure`s are unique in their own way……in a good way”

“I fish Florida rivers and when I see a big redfish tail I throw this baby about 10′ in front of him, wait 3 seconds, fast retrieve it and bingo. I have a red and white version I use at dawn or twilight. I take the front hook off all my lures and there is less line snags.”

“I’ve fished under dock lights for seatrout all my life and never have I had as much fun as with the Mirrominnow. The holographic flash makes it irresistible to seatrout when used with a slow twitch-twitch retrieve. I’ve also caught red on the flats with it by fishing it just underneath the surface in shallow water. It’s a little expensive, but it’s worth the cost. ”

“I have got to tell you that right now I don’t think that you can beat a Mirrolure for catching snook on the Myakka River and in Charlotte Harbor. I have been fishing the area for several months now, fishing days and nights 3 or more times per week. I use the catch 5, catch jr, catch, mr17 & mr19 in a variety of colors. They all consistently outperform even live bait for snook. I have caught other species as well, but the snook eat these up like candy. When all else fails cast a Mirrolure. I have become a huge fan, and these lures dominate my tackle boxes. They also work great in the surf, off the beaches.”

“Suspends lower with slower retrieves and pausing. Will function well at the surface wither quicker twitches. Used it the other day and caught a mixed bag of ladies, jacks, flounder and reds. The chartreuse color also works well for trout. Because of the versatility in the water column I found it very useful around oyster bars and skinny water. ”

“Wanted to try some new lures for some fishing at South Padre Island and this lure did not disappoint. I plan on buying a few different colors for my next trip.”

“This Mirrolure is excellent for tarpon, snook, jack, makarell and barracuda. This is the best mirrolure.”

“Walks the dog just below the surface, can be worked as a topwater slider or used to tickle the Seagrass and pull up Trout & Reds. Has no built in action, but Trout and Reds love it!”

And from ShallowFishBlog.com
MirrOlure (L&S Bait) is a Florida-based company that has produced quality lures for decades. One of their latest offerings – the 19MR, or “MirrOminnow” – is a slim, streamlined lure designed to loosely mimic any number of small bait fish that are favored snacks for coastal gamefish. I recently tested one on a trip far down into the Glades.

The streamlined design appealed to me at first glance. It’s my long-held opinion that many topwater plugs on the market are too large for shallow-water settings. Conventional thinking seems to be that bigger lures equal larger fish, and there’s a kernel of truth in that. But gamefish often target smaller baits, and in my experience it’s medium-to-smallish lures with lively action that catch the most fish – especially in skinny water where fish can be easily spooked.

Because of it’s smallish profile, I assumed the MirrOminnow would be tough to cast with anything but very light tackle. Despite it’s relatively light weight, however, I could zing it with authority on a respectable-sized rod/reel combo using braided line and 25# leader. Pitching it into tight holes along shorelines was easy, as was launching long casts across open flats. I also assumed the lure would list about and lose it’s action if it broke the surface, but I was proven wrong again. To my surprise, the MirrOminnow flicked about on and just under the surface, but, if allowed to rest for a second or two, also twitched and flared about under the surface. In short, it seems to combine the qualities of a sinking plug with those of a floating plug, so anglers can fish it a bit deeper or right on top. Wow.

Another appealing aspect of this lure was the two sets of treble hooks. For about two decades the 7M, a venerable plug produced by the same company, was my favorite plug. But that lure’s three sets of treble hooks always struck me as overkill and an unnecessary danger to gamefish. For the past decade or so I’ve removed the middle set of trebles on 7M plugs, which can be a time-consuming process. The MirrOminnow, by contrast, features only two sets of hooks right out of the box. I noticed no adverse effects in terms of hook-setting, and the gap between the hooks makes it easy to unhook and release fish.

The MirrOminnow 19MR features a rattle that, when retrieved with a flicking motion of the rod tip, “clicks” audibly. I’m convinced it draws gamefish from many feet away. I’ve used both the standard and “R” versions of other MirrOlure offerings, and the “R” versions seem to trigger more strikes in aggressive fish.

Proof is in performance, though, and I was anxious to see if gamefish agreed with my assessment. On the trip into the Glades, the lure produced redfish, ladyfish, jack, snook and even largemouth bass, and several of the fish moved to the lure from up to ten feet away, attracted by its flashy, flicking action and light rattling sound. I am certain it will also be deadly on smaller tarpon, bluefish and striped bass.

Conclusion: There are hundreds of plugs on the market, but only a handful seem to be consistently endorsed by seasoned skinny water anglers. And that group of lures tends to be deadly on any number of species, including snook, redfish, sea trout, smaller tarpon, striped bass, bluefish, and more. Given what I’ve seen, I’d say this plug has the qualities required to quickly move into that elite list. If you fish shallow saltwater on a regular basis, the MirrOminnow should be in your arsenal.

Founder, Harold LeMaster, will always be remembered for his innovative approach to lure manufacturing. His unique use of a mirror to give his lures a flashing, lifelike appearance underwater, is appreciated by fishermen the world over. Today, the patented MirrOlure® is made with the same care and craftsmanship that Mr. LeMaster demanded.

At L&S Bait, we have always maintained the goal of providing a product that would allow our fishing partners the opportunity of setting records every time they were on the water.

The Neil Blog, Drop the Puck