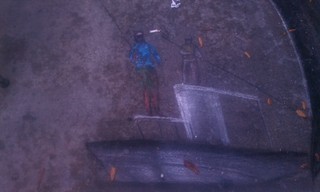 Snook, Redfish And Other Mangrove Denizens Will Skip To Your Lures

Most saltwater anglers learn early that overhanging mangrove limbs are havens for snook and redfish. But they learn just as early that casting into a space about the height of a rat hole is not easy, and that every time you snag a mangrove limb and go in to retrieve your lure, mosquitoes in droves come out to welcome you. Sam Heaton of Stuart has a solution. He’s a lure-skipper. “Just like you used to skip flat stones on the water, you can skip some lures in under the mangroves,” said Heaton, who exhibits his skills regularly as a member of the Minn- Kota fishing team.

Skipping has been around for a long time. One of the best-known advocates in the Bay area was captain Merrill Chandler, who taught it to hundreds. Chandler died last year. Basically, the tactic involves side- arming a relatively snag-free artificial lure, throwing it with enough force that it bounces off the surface and goes skittering far back between the prop roots of the mangroves. “It’s easiest when you’re in the front of the boat,” Heaton said. “If you’re right-handed, run the boat so the port side is next to the shore. That gives you the best leverage to cast from the bow.” He said the rod tip should be kept very close to the surface.

A spinning rig is best, because it’s less prone to backlash than a baitcaster. “Just whip it really hard and it will skip right in there, sometimes an extra 10 feet after it first hits,” Heaton said. The tactic pays big dividends in summer, he said. “When it gets hot, those fish are going to be back in the shade on every high tide, so if you can put it all the way back under, you’re going to do a lot better than the guy who lands a couple feet short,” Heaton said. His favorite lure for the tactic is a single-hook plastic shrimp such as that made by DOA in Stuart, but a number of lures will work. Basically, they need to be cylindrical or football-shaped for best skipping, and with no appendages – no props or lips – to catch the water.

PLENTY OF TARPON: There were rumors along the southwest coast that a kill of big tarpon had hurt the spring run there, but this week loads of fish showed up in the usual haunts, along the beaches and inside the passes and bays. Tarpon arrived in force at Boca Grande and beaches southward after being conspicuously scarce for the first two weeks of what usually is prime tarpon time in the area. Captain Dave Markett of Tampa said a huge mass of tarpon moved into the pass on the full moon, and the fish fed heavily on pass crabs with the outgoing tides this week. “The tarpon that were here early seemed sick, as if the red tide was bothering them,” Markett said. “But the rain and the moon tides have cleared the water, and the fish are going gangbusters now.” Late last week, one Naples skipper, investigating a report from a shrimp boat captain, reported seeing “maybe a thousand” adult tarpon floating dead on the surface about 17 miles west of Naples. No other boaters from the area have reported seeing any significant number of dead fish, according to Allison McDonald of the Florida Marine Research Institute. “

At this point, we have no hard evidence of a kill,” McDonald said. “We would like to get photos if anyone took any, or maybe a fish if any are still floating, but so far we haven’t gotten a staffer into the area to check.”

CHANDLER MEMORIAL: Captain Mel Berman will host a memorial for Chandler, also known as “The Canoe Man” for his expertise in fishing saltwater from a canoe, 6-9 a.m. Saturday on WFLA, 970 AM. Guests include Mark Nichols of DOA and Konrad Krauland of PowerPro. Berman invites friends of Chandler to call in with memories