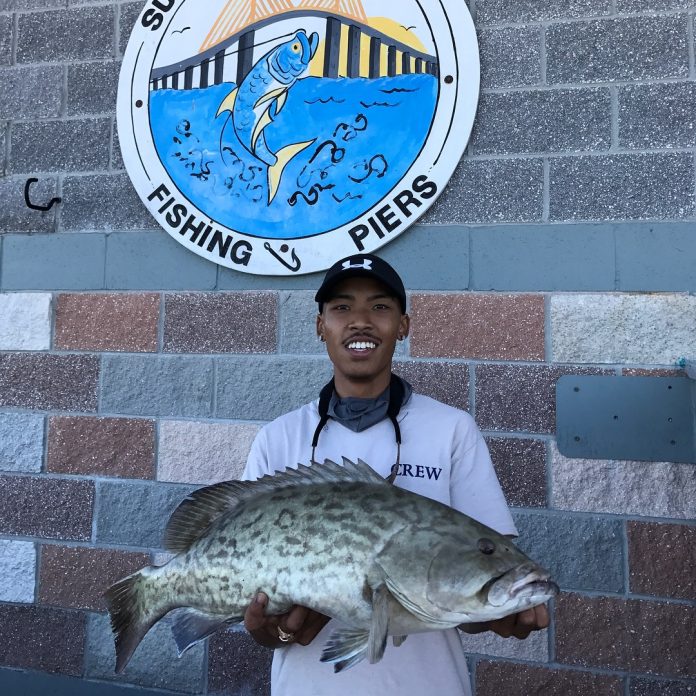 Cooler mornings transitioned into breezy and pleasant days at the Sunshine Skyway Fishing Piers this past week and many visitors commented on the nicer weather as they pursued traditional fall bites at the mouth of the Tampa Bay Estuary.  Spanish mackerel remained the top target and did not disappoint anglers on either numbers or size of fish.  Gag grouper kept active as well and many visitors reported almost constant action from shorter fish as they pursued their keepers.  Gags were not the only active member of the Grouper Family of Fishes this past week as many hard-core anglers were able to tangle with the massive, beautiful and fascinating Goliath Grouper – a true “bucket list” rod & reel adversary for many pier visitors.  Sharks remained on a spectacular bite and many visitors reported catching 10 or more sharks of various species during a single visit.  Some schools of red & black drum have been reported crossing through the piers – as often occurs during most fall fishing seasons.  Finally, there is a good enough pompano bite for those that truly cherish this tastiest member of the Jack Family of Fishes to put in a few hours of jigging – especially on the start of the North Pier.

Spanish mackerel were once again the main story at the Skyway Piers and will likely remain so until the first solid push of kings into Tampa Bay occurs.  Many anglers this past week were asking “when” on the kings and the only fair answer is that such a push could occur any day at this point.  Baitfish schools are incredibly strong at both piers and are attracting not only Spanish mackerel, but also jacks, ladyfish and blue runners in solid numbers.  Kings will key on all of these smaller species and have no qualms about ingesting their smaller Spanish mackerel cousins.  Kings also love larger scaled sardines and threadfin herring, and these are perhaps the best way to approach early season kings because you still maintain a great opportunity to catch a very large Spanish mackerel if no kings are in the area.

Early season king mackerel at the Skyway Piers are often susceptible to some of the same approaches used successfully for Spanish mackerel.  Many of these fish will run from 8 lbs. to 15 lbs. and strike at spoons and Gotcha lures so often thrown at the piers.  The one difference being that the strike & teeth of a king are often too fast & sharp for fluorocarbon leader material.  A very short length of coffee-colored hardwire just ahead of the lure will keep the king hooked-up and give the angler a shot at a big fish on light tackle.  Line capacity is much more important than strength at this point because the skin & flesh right around the king’s jaws is so soft & fickle that any heavy pressure often results in hook pulls.  The same premise can be applied for smaller live baits like sardines or herring early in kingfish season where a single hook and short length of hard wire are used to free-line a live bait.  Indeed, many anglers this past week trying for early kings took some Spanish mackerel pushing the 30″ range by free-lining live baits.  A trolley-rod system is also very effective at the piers and will be discussed in detail in upcoming pier reports.

Spanish mackerel remained hot on the methods discussed above.  Casting spoons or Gotcha lures and trying to keep them near the surface (with a float or fast retrieve) was still top billing.  Fishing live sardines or cut strips of sardines or herring on a float using a long shank hook ranked a close second place.  Some of the largest Spanish mackerel this past week – fish pushing the 30″ mark – were taken by free-lining sardines (or smaller blue runners) on short wire leaders in search of kings.  The bite on the North Pier was more consistent this past week, but the South Pier also had some great bites.  The bites on the South Pier just seemed to come in shorter window than the North Pier and this presents a lesson in mackerel fishing…  Do not leave a good bite, but always move along the piers at tough times and also move from pier to pier at very tough times.  Skyway Pier Passes are good at either pier for a 24-hour time frame – allowing easy movement for the visiting angler.

Fall is a time that folks start to ask about migratory schools of red & black drum at the mouth of Tampa Bay.  The answer is a resounding “yes” at the piers, as some monstrous fish of both species are spotted and landed at the Skyway Piers every season.  These are often the largest drum in the bay and become migratory as they reach the upper limits for their growth cycle.  Redfish from 20 lbs. to 40+ lbs. are common every fall and black drum exceeding 50 lbs. would not even cause a stir.  When and how do you know is the question posited by anglers and the answer is almost funny…  At many times they are tailingin water where there is no chance their snouts could hit the bottom to stir up a crab…  At other times their heads are actually protruding from the surface of the water like they are looking for a fight…  In any event, you often (not always) see them coming.  You can throw jigs, plugs or live bait offerings at these aggressive fish and often get a strike.  A member of the Skyway Pier Fishing Team recently took a 38″ redfish using freshly cut ladyfish – something he and other pier experts cherish as a fantastic multi-species bait option.

Shark action in recent weeks has been nothing short of outstanding.  Your author had two visitors this past week – both new to shark fishing – who said they stopped counting after they had landed 10 sharks.  The most common mixture was that of blacktips, bonnetheads and sharpnose sharks, but there were other species reported.  Skyway Pier Fishing Team staffers reported great blacktip shark action while seeking some kings and larger Spanish mackerel.  The action kept anglers running all morning long and there are few fish in Tampa Bay as fun to catch as a fat & feisty blacktip shark.  Shark action can continue all season long at the Sunshine Skyway Fishing Piers.  Although there is no way to verify such a claim, we at the Skyway Piers like to think we have put more anglers on their first shark than any other single land-based fishing destination in the world.  We will keep on trying to attract more fish and urge you to keep on enjoying your family fishing time in sunny Florida!