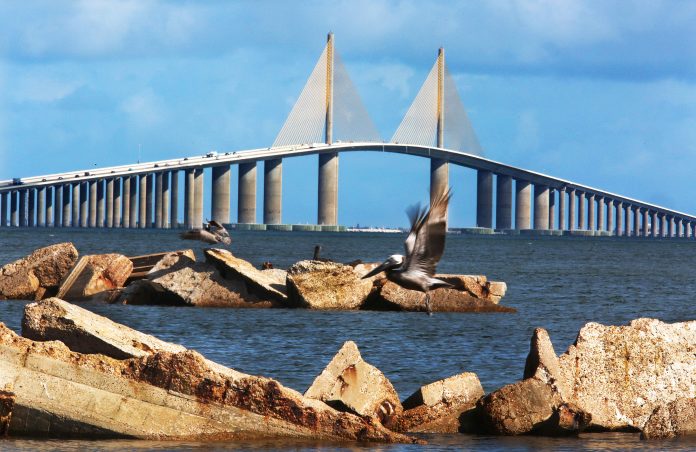 As some cool water fishing patterns are settling in, a few warmer water species also remain in play at the Sunshine Skyway Fishing Piers.  Spanish mackerel were on an up & down bite this past week, with some strong days giving way to tougher days.  Pompano and permit had some banner days this past week and a few limits of pompano were taken for the first time in several weeks.  Gag grouper remain on a reliable reef bite and fish are being taken by both artificial lures and natural bait presentations.  Sheepshead are becoming a more reliable target with each passing day and many visitors are starting to produce nice catches of these tasty porgies.  Some spotted and silver trout are beginning to show in the nighttime hours at the ends of both piers – a common and reliable winter patter for both of these species.

Passing cool fronts this past week often sent baitfish schools into hiding at the piers.  The positive news was that none of these passing frontal systems was strong enough that baitfish like sardines & herring would leave the general vicinity of the piers.  They most often simply tucked tighter to structural elements like pilings or hugged the bottom in deeper water for a short period of time.  Spanish mackerel will religiously follow these baitfish, and while it might make it harder to catch them for visitors on cold days, it also generally means a fast return to action with warmer water temperatures.  Look for mackerel action to return with the warming trend that begins this weekend and holds well into next week.  Indeed, some anglers even took Spanish mackerel by using slow jigging techniques and cut bait presentations in deeper water during the coldest of days this week.

Pompano and even some permit provided action for jigging anglers that enjoy fishing the approach sections of both fishing piers.  Some days produced limits and other days produced only a few fish, but anglers who enjoy both the fight & culinary qualities of these species were happy to spend the time bouncing jigs & teaser flies in the Florida sunshine.  Moderately moving water was key – whether on an incoming or outgoing tide.  Rapid tides and slow tides are tougher to fish, but anglers who adjust jig weights to the tidal flow can usually pick-up a few fish missed by others.  Most anglers targeting these tasty members of the Jack Family of Fishes use a combination of a swim jig (banana-style) and the inclusion of one or two teaser flies.  Both species feed on smaller crustaceans like pass crabs, fiddler crabs and sand fleas.  The method behind the madness is that the jig & teaser combination accurately mimics one of these prey items being flushed from hiding as the jig strikes the bottom and makes a puff of sand similar to a fleeing crab.

Gag grouper anglers are already enjoying a December bite at the Sunshine Skyway Fishing Piers.  December can be a hot month for gags as cooler water temperatures seem to energize these fish into striking a wide variety of baits.  Anglers had the most luck on morning outgoing tides, but plenty of fish are still taken on the incoming for those willing to put in the extra work of getting a bait through the older closed pier span.  Many of the most successful anglers use a multi-tiered approach of artificial and natural baits.  Gags are fairly territorial – especially when they reach the larger size range – so a missed fish on either one method or one day might become a caught fish in the near future for savvy anglers.

Sheepshead have been improving in both numbers and size as we approach the winter fishing season at the piers.  Look for these fish dressed in black & white prison garb to gather around the areas with the most pilings at the piers.  In essence, this means the restroom and bait shop areas, or anywhere there used to be a cross-over between the spans of the pier sections.  These fish are much easier to spot than they are to hook because of their feeding method that takes a bait in and immediately spits out the non-flesh (shell) portions.  Small shrimp and fiddler crabs fished tight to the pilings using the smallest hook, leader and sinker you can get away with make up the terminal tackle for this porgy.  Some experts strike as soon as the fish even moves to the bait and others wait until the rod loads up with weight.  Several visitors this past week explained they thought sheepshead were not popular as a table fish.  Perhaps this is because a freshwater fish with the same name is much less desirable.  Make no mistake – this fish ranks among the finest-eating species you will encounter in either fresh or saltwater.

The approach of the winter season at the Skyway Piers often means that some silver, spotted and sand seatrout will gather near the main shipping channel in Tampa Bay.  This puts them near the end of both fishing piers, but especially at the North Pier, because of the water depth & proximity to the channel.  These fish will take live shrimp or sardines, but are also quite susceptible to tandem jig rigs or sabiki-style baitfish rigs with a small bit of natural bait added for scent.  Slowly bounce your chosen presentation along the bottom and look for the better bites to be after sunset.  Whiting and flounder can also join in this game, making this a strong multi-species cool weather fishing pattern for both piers.

Redfish starting to return to the flats